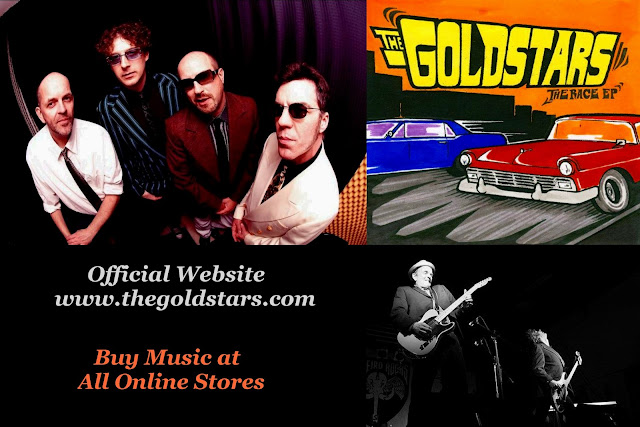 An insider tipped me off to The Goldstars, veterans of the Chicago rock and roll scene who apparently got together as friends to simply play the music they loved. What brought them together was a mutual affection for the golden age of primitive rock n’ roll as they worshiped the holy trinity of the Farfisa organ, the fuzzed-out guitar, and the wailing voices of American kids trying to sound like British kids trying to sound black.

Chicago isn’t a foo-foo veggie burger eating town, Chicago loves the steak AND the sizzle, yet the Windy City has been starving for a meat-and-potatoes rock and roll band amongst the post-rock, punk, power pop and alt-country factions. The Goldstars are just the ticket.

Sal is an ideal frontman, his white blues shout, his bass often held aloft, his mop of hair shaking, there is no doubt as to his sweaty commitment. To his right, Skipper mans the keyboards, which he has festooned with gold tinsel. Skipper frequently serves as the emcee, sometimes takes over the bass chores, but his keyboard contributions give every Goldstar tune the right amount of zip. To Sal’s left, filling in on guitar, stands Dag. This guitar virtuoso razzles and dazzles while pumping out the basic chords or concisely slicing up the crowd with a solo. Maintaining control while somehow still adding to the frenzy is the drummer, Goodtime. A band can’t truly rock without a great drummer and The Goldstars truly rock, so that gives you an idea of Goodtime’s skills. He not just the beat of the band, he’s the heart.

The electricity of the Goldstars is no surprise when you study their pedigrees. Goodtime and Skipper are both members of Chicago’s most beloved party rock and roll band, The New Duncan Imperials, who have been entertaining thousands with their white trash sounds for years. Dag was last seen playing with Poi Dog Pondering & The Greenwoods. And Sal was hiding his (Gold)star qualities as the drummer for power pop titans, The Krinkles.

The Goldstars are a four-man fun factory, tight as a drum, yet relaxed as can be, showing why the sounds of yesterday are worth playing today. The Goldstars recognize that a great song is a great song, and the only way to rock seriously is by not taking rock and roll too seriously.

5. Music placement on TV shows & movies such as:

7. Cut a special 7" single with Andre Williams and released by Spanish label Munster Records in 2007.

8. Runner-up in the Chicago finals of Little Steven’s Underground Garage Battle Of The Bands 2005.