Steve Hackett – At the Edge of Light - Album Review 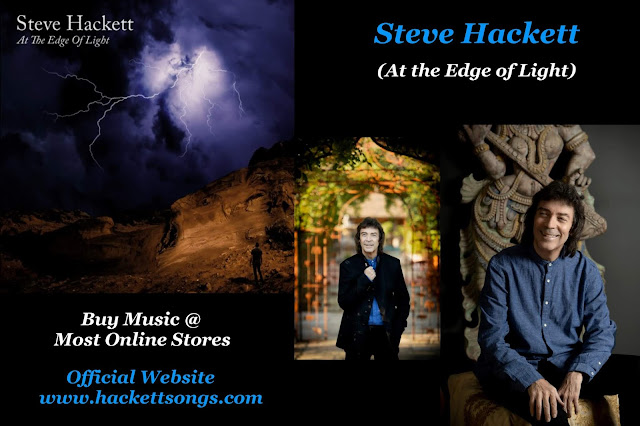 “At the Edge of Light” is a new ten track album by Steve Hackett which covers a wide variety of genres and sounds in a progressive experimental matrix.

The album projects, at its core, a concept of morality that is, in my opinion, an awakening of sorts that clearly sees that mankind has strayed from the path in the forest of life to a point where there is darkness surrounding us; while also seeing the light ahead on a path we should be travelling.

The titles of the album’s 10 tracks lend us the intuition of what to expect from this record; from fallen walls of ancient empires to the beasts in our time, to the conflicts within, resolution and peace.

(Album released by record label “Inside Out Music” January 25th, 2019) - Order Album at this link


The music is consciously expressive of the World around us, past and present and comes after months of touring on top of Steve Hackett’s last two albums “Wolflight” (March 27th, 2015) and “The Night Siren” (March 24th, 2017), Two great albums in their own right that also play a part in 2019’s “at the Edge of Light”.

“At the Edge of Light” is just what it implies…it gives the impression of humanity existing at the edge of twilight, racing to catch up with the sun, to shed the cloak of darkness that is quickly consuming the world…while at the same time revealing that there is hope and peace if together, we choose it make it happen.

And so, in this context, here is my review and perception of the 10 tracks on “At the Edge of Light”.

“At the Edge of Light” continues where the “Night Siren” left off and opens with the sounds of the “Tar”, a Persian instrument shared by many cultures in the Middle East and Caucasus region. The instrument is fitting to express almost empathically the ancient and current conflicts in the cradle of humanity.

The song then moves quickly to thundering drums projecting a storm that leads into an orchestral story of conflict and despair depicted by the brilliant lead guitar expressions of Steve Hackett.

“Fallen Walls and Pedestals” conjures up thoughts and feelings of the dark place the world is in today but also the enormity and the tininess of an ancient fallen empire, both empathically projected through the guitar playing of Steve Hackett.

“Beasts in Our Time” is a continuation of the first track, “Fallen Walls and Pedestals”, that expresses musically, the ills and evils of our times. It begins with orchestral notes of melancholy that intertwine with expressive lyrics, into an amazing sax solo including Steve Hackett’s stunning guitar work which then breathes life into every turn of the song along with an expressive orchestration. Also, of note is the impeccable drumming, and base playing that carries the flow and tight delivery of a supporting cast that makes this one of the best Progressive Rock songs of the year.

“Under the Eye of the Sun” emerges out from under the blanket of darkness that pervades our world, to bring forth the light of hope in an upbeat, lively and positive musical spirit, that invigorates an empathic reach for the stars…

Steve Hackett reminds us that its not too late to change our fate and that we can vanquish the darkness that covers the Earth if we decide to do it. Such is the power we have within us, one which can also be found all around us in nature.

The song is a choir of upbeat sounds carried by brilliant drumming, vocals and guitar work that shapes the song into a euphoric expression…the music then slows to capture the awe and amazement felt when standing before a cathedral of natural history with the didgeridoo and viola shaping a humble acknowledgement to the waves of truth calling from ancient times. I find the song uplifting and reverent to the soul.

Official Song Stream: Under the Eye of the Sun

The harmonica and dobro guitar at the beginning of the song brings to mind a train whistle and several people hiding in the shade, from the heat of the sun, with elevated levels of adrenalin pumping through them in anticipation of escaping their bondage.

The unmistakable gospel voices of Durga & Lorelei McBroom soon kick in to give the song a real taste of hope and freedom and then moves on to tell its story with a far-off approaching dobro guitar and lyrics that capture the moment…and then just as quickly, the song takes off with a drum kick and dobro buildup that moves into a sophisticated progressive rock collage that musically describes the conflict and struggle people endured. All of which is brilliantly portrayed by the captivating guitar playing of Steve Hackett. The song then concludes with moments of jubilation by choir like vocals and guitar work to then fade to the train simulating dobro guitar, carrying an eerie reminder that the struggle carries on…a brilliant expression in every way.

“Those Golden Wings” opens with a symphonic portrayal of heaven, as if standing before the creator with a lifetime on display in all its fullness, value and merit…the song moves effortlessly to an acoustic tale with meaningful lyrics that builds into an orchestral accounting with a telling and memorable chorus. The story then continues through Steve Hackett’s captivating lead guitar that expresses the emotional peaks and valley’s in the complicated turns of ones lifetime. Together, they combine with the magical elements of cinematic surround and operatic choir to encompass an expression of a full life lived and on display as part of a greater realm.

The song “Shadow and Flame” opens with a ping, an Indian sitar and drum with vocals that vibrate an aura of the ancient past, as if part of the old silk road comes back to life from its death to teach us that the answers to the future lay in understanding the past.

The song then moves forward, carried by brilliant drumming that easily shifts a changing tempo with a sitar that is expressive as though telling a story through its notes and vibrations…and always the symphonic surround sounds that emulate concern and immediacy. There are also points within the song that connect to “In the Skeleton Gallery” from “The Night Siren” which then evolves into the sophisticated array of Roger Kings keys and Steve Hackett’s guitar as they weave in and out of each other to the songs end. An amazing tale told through music.

“Hungry Years” is an upbeat popish tune that at times reminds me of “The Seekers” - “I’ll Never Find Another You” and at other times reminds me of Mike Oldfield’s “Moonlight Shadow”, but it goes where those songs could not. (For all you old school DJ’s out there, that’s a hint 😉)

Wonderful harmonies with a walk down memory lane and a genius solo on lead guitar. Who say’s Steve Hackett can’t do pop?

The final 3 songs on the album “Descent, “Conflict” and “Peace” can be viewed as three parts of one song that takes us through to the album’s conclusion.

“The Descent” is a dark orchestral march and cinematic descent into the shadows preparing to face the maw of darkness that is eating up all life and spiritual connection to this planet.

“Conflict” – is coming face to face with the darkness in a determined battle. Engaging orchestral and cinematic soundscapes with an empathic lead guitar emulating the fight for survival and battle to victory.

“Peace” begins with simple piano and vocals to express the end of conflict, the peaceful silence that comes after victory…a victory achieved by our unity to confront the darkness.

In the song, Steve Hackett leaves me with these final thoughts; Trust in your intuition that love always conquers. Face your fears for it is half the battle, as the darkness will dissipate upon your awakening to reveal that the sun does indeed come up the next day and that thinking with your heart is truly the way forward.

A magnificent end to a brilliant album.

“At the Edge of Light” by Steve Hackett is both an intellectually and spiritually crafted masterpiece of expression told through the empathic vines of music and lyric.”

In my opinion, the album is one of his best if not the best album that Steve Hackett has produced so far, during his solo career.

Some of Steve Hackett’s previous albums such as “Wild Orchids”, “Wolflight” and “The Night Siren” place well on my favourites list, but “At the Edge of Light” for me, tops them all for its well rounded and awakened concept in trying to make the world a better place.

“At the Edge of Light” receives two thumbs up from this old DJ. “A Fantastic album!”

Steve Hackett: At the Edge of Light (Interview)