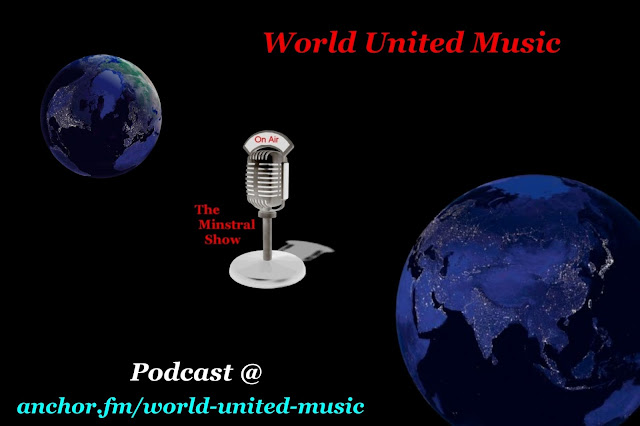 World United Music presents episode 037 of “The Minstral Show” now on Anchor FM and Streamed around the World. Check us out at the following link:

This episode is actually the first one I made using the Anchor FM podcast website so we are evolving into a real radio platform for promoting great music across the World…Hey, catch the wave every Sunday evening on Anchor FM, the new home of “The Minstral Show” 😉 We are the Music Radio Revolution.

First up on today’s showcase is a song called “In Dreams by “Third Whale” a band out of Oslo Norway. The group comprises musicians, Eivind Skolt, Kent Rudolfsson, Henning Gulbrandsen, Vegard Magnhildson, & Robert Nystrand Nielsen. Their music is very pluralistic, in that it’s progressive rock, garage rock and psychedelic rock all at the same time. “In Dreams” jumps out of the blocks with its high energy and dopamine hooks that will surely have you boppin…great traveling song too if you’re on the road.

The second song of this set is by Black Country Communion with “The Last song for My Resting Place”. The song is taken from their smash 2017 album “BCC 4”. - Glenn Hughes, Joe Bonamassa, Jason Bonham and Derek Sherinian who make up “Black Country Communion” are seriously, the hottest rock act on the planet today; a real bona fide super group that brings rock into the 21st century…and with a bang.

Following BCC is Melbourne Australia’s Rockin blues band “Southbound Snake Charmers” with “Cut My Time” another stellar rockin blues tune which is taken from their brilliant 2017 album “Rhythm and Rust”. Chris Denman, Brooke Maloney, and Nat Sutphin make up this trio which is gaining much popularity across the internet and for good reason.

Our second set of music brings Progressive rock group “Wobbler” together with the angelic tones of “Agnes Obel” and the soft alternative sounds of In Hoodies.

Their song “From Silence to Somewhere” is taken from their 4th album by the same name and released in 2017. Without a doubt, the band takes the listener back to the Progressive Rock days of the 70’s with the unmistakable influences of Gentle Giant, Emerson, Lake & Palmer, Triumvirate, Yes, Genesis and others. This song is brilliantly complex with several parts woven into this 20 minute rock opera piece…it has so many feel good nostalgia moments that you’ll want to repeat the song over and over. A big thumbs up for this old DJ.

Following Wobbler is Danish born artist “Agnes Obel” with a wonderful piano composition called “Philharmonics” taken from her 2010 album of the same name. Agnes Obel has become a household name and rightly so as her angelic voice and beautiful piano compositions greet her listeners with a gentle soothing ambiance that casts off the madness of the world for a more relaxed setting. ….I find Agnes Obels music also mixes very well with progressive rock….If I was to describe her music, simply put, I’d have to say her music is medicine for the soul.

The third song of the set is “Shed Tune” by Bursa Turkey’s own Murat Kılıkçıer who performs under the name of “In Hoodies”. Shed Tune is alternative rock with lush vocal harmonic hooks that’s really infectious…it’s what I call a singers song.


Shed tune is taken from his 2016 album “A Lunar Manoeuvre” which is an album filled with pleasant surprizes…Hope you enjoy it as much as I.

Our last set of music on this episode combines several infectious neauveau alternative pop waves…ie: songs to that would have been huge hits in the 60’s, 70’ and 80’s when singing with groups of friends was cool…

First up is Dirt Dress with their poetically infectious 2014 hit “Revelations” taken from their EP of the same name. This song is bound to be a cult classic…lots of artistic flair in this one which is populous to say the least. The band is on hiatus at the moment pursuing solo projects but there is no doubt in this DJ’s mind that this song is going to be massive down the road.

Next up is “The Hanging Stars” featuring “Miranda Lee Richards on vocals with “How I Got this Way” taken from their 2018 album “Songs for Somewhere Else”.

The Hanging Stars are Richard Olson, Sam Ferman, Paulie Cobra, Patrick Ralla, and Joe Harvey-Whyte. The song is a spacy country folk pop tune with infectious harmonies that urges the listener to sing along with its upbeat matrix.

“Dig a Little Hole” is a song that, in its comical way, urges people to take their time and think before acting…good advice with a tap happy way to do it.

…and now let’s listen to some great music, on the Minstral Show…see you next Sunday.

Posted by Stewart at 9:22 PM No comments: