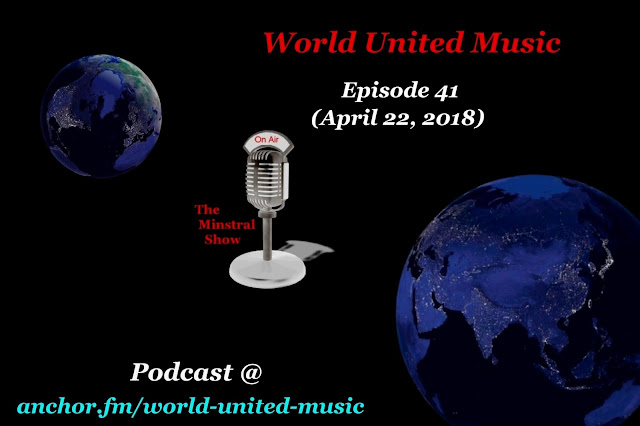 Hello and welcome to episode 41 of “The Minstral Show”!

There is an awakening taking place today that is led by an empathic moral desire to make the world a better place. This awakening has morphed into a global collective consciousness, brought to life by the individual and our common moral foundations over the internet, through computers and our communication technology. The World is evolving, and moving away from the age that came before when we all lived in our own little worlds, before the internet.

We live in interesting times where the individual voice can rise and be heard by many…yet it can also be silenced by the powerful…however, two things are certain, truth and evolution cannot be held back for very long as we communicate with each other across the World and over the Internet.

A very important element of our collective consciousness is art and music which comes from the creative thoughts and impressions of the individual, transposed onto canvas or into compositions. The world has entered a new age of renaissance that is consciously expressive...and so today’s theme takes us on a quest to understand our path in these days of great change, featuring Graham Nash, Temples, Riverside, David Ian Roberts, David Crosby, Neil Young, The Colin Tench Project, Casey Stratton and Chris de Burgh. Have a listen and if it resonates, share it with your friends.

More than just a podcast, World United Music is a solid connection to a global consciousness that has emerged to build a better world…


Graham Nash opens the fist set with “This Path Tonight” taken from his 2016 album of the same name. Asking, “Where are we going”… The song reflects our common need to understand where this dizzying and collective path of life is taking us… “This Path Tonight” is beautifully written and expressed by one of the worlds very best artists.

“Colours to Life” is a song that steps back into the psychedelic sounds of the mid 60’s era to bring its vibrant Colour and magic back to the 21st century.

Rounding out the set is Riverside with “Reality Dream III” from their 2005 album “Second Life Syndrome”
“Reality Dream III” is a brilliant progressive rock tune that seemingly represents communication of the fractal being who then passes into a collective state of mind. A brilliant thought provoking instrumental that urges our minds forward in a free-flowing thought transfer to set us on a path of understanding and collective evolution.

And so, this Path tonight brings colours to life in this reality dream, on the minstral show.


Our second set of music expresses how the vulnerable individual soul deals with the transition and new unfolding reality of a collective consciousness; where beliefs and illusions can be shattered by truth and by some of the spiritual and material negatives that have risen with the technocratic side of the corporate AI world.

David Ian Roberts provides reflective understanding through a soft jazzy acoustic tune to capture the essence of the individual in deep thought through serene moments of reflection… In the overall collective consciousness, differing thoughts of mind, battle, and can leave us wounded while feeling a little blue, but also with important lessons learned…the music is emotionally expressive and Subtly pleasant that connects on a deep level.

David’s song asks “What’s Broken” as he describes the lonely fractal soul in all its vulnerability.

Poetically engaging lyrics and infectious soft jazz rock music, serves as a catalyst in the sensual perception of a collective conscious awakening within a single soul, seen through open eyes and empathic tether in a world living in lies…yet also understanding, that life’s precious moments are quickly passing by. “What’s Broken” is a deeply moving song that expresses the empathic ability to see the world as it is… by a brilliant artist.

Neil Young and Crazy Horse close out the set with “Driftin Back” from their 2012 album “Psychedelic Pill”.

“Driftin Back” is a 28 minute masterpiece of reflection to when freedom and quality of life was abundant and corporate greed had not usurped the world or lowered the quality of life.

The conscious connection that Neil Youngs has had with his audience throughout his career is ever present in “Driftin Back”. When Neil sings, he sings our collective feelings for peace, justice and human rights. An important lesson we continue to learn as this vast world we live in becomes smaller through technology and communication but most importantly, through our emerging collective consciousness.

The final set on today's show expresses the realization of how powerful the Internet has become in bringing all of us together as a collective consciousness. Where, through our moral values, understanding and empathy we can build a better world together for the generations to come.

The Colin Tench Project opens the set with “See How She Runs” from their Dec 2017 album “Minor Masterpiece”…”See How She Runs” expresses the lighter side of music in an almost “Broadway meets 10cc” themed musical where our collective minds have merged and begins speaking to itself…Sung brilliantly by Peter Jones.

“Weight of the World” is a song lush with Casey Stratton’s empathic vocals in lyrics that compares the intersection of two different worlds, the one before the internet when we were all in our own little worlds separated from each other, and the consciously connected world of today where the connection to millions of souls is just a click away. A Brilliant song dedicated to making the world a better place through the giving of ones self. A very moving expression not to miss.

Chris de Burgh closes the show with a wonderful song of hope…hope for overcoming all the trials we face together, collectively…we are closer today to achieving a unified moral community because we are all connected through modern communication of the Internet…we can achieve great things together and even though there are problems in the world, they will fade as we grow collectively in voice and consciousness until one day we cross the plane of evolution and begin building a better world. Chris de Burgh at his very best.

And now its time to sit back and enjoy another great set of music, on the minstral show, see you next week.