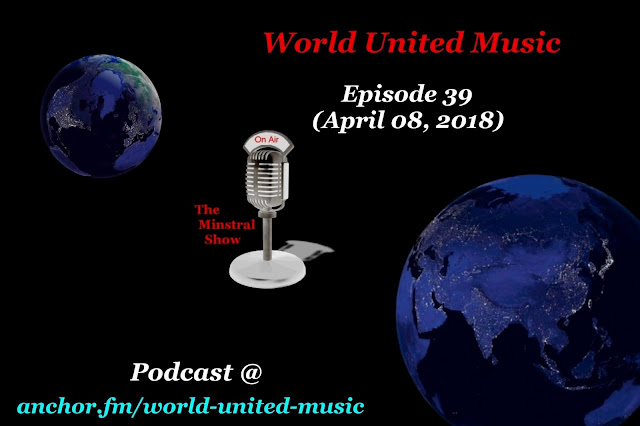 Welcome to episode 39 of “The Minstral Show”!

An expressive line up of great music on this the 39th episode of the Minstral Show featuring, Greta Van Fleet, Black Country Communion, Son Little, Dave Kerzner, Exquisite Corp, Tom Moriarty, Peter Case, The Chemistry Set and Ancient Cities…serving up three sets of the best music being made today while covering a wide variety of genres from this global music revolution.

First up is a young band from Frakenmuth Michigan, “Greta Van Fleet” with their 2017 hard rockin hit “Highway” taken from their double EP “From the Fires”. If you are a Led Zeppelin fan hang on to your socks because this band not only sounds like Led Zeppelin, they beg the question are these new Led Zeppelin tunes? Jaw dropping rock n vocals with their own unique spirit to mirror past generations with todays world…Greta Van Fleet are brothers Josh, Jake and Sam Kiszka with family friend Danny Wagner…these guys really rock!

Following Greta Van Fleet is super group Black Country Communion with “Wanderlust” taken from their 2017 Album BCC4…an album that wakes the soul with its rockin mastery to shake the world and remind everyone that Rock n Roll is here to stay. Glen Hughes, Joe Bonamassa, Jason Bonham and Derick Sherinian carry the torch and lead the way in this new age of the global airwaves.

Closing the set is Philadelthia PA’s “Son Little” a.k.a. singer / songwriter Aaron Livingston with “O Me O My” The version I’ll play today is the 2018 Gavin Moss Remix version of the same song that originates from Son Littles 2017 album “New Magic”.

O Me O My is a soulful rockin Blues tune that faces the world through eyes that see…while dancing the weight of that world away through its beat and movement. A song that has captured the attention of millions of online listeners this past year. It was an instant hit with me the moment I heard it. Hope you enjoy it too.

The concept of our second set of music, is an awakening of sorts to this dying world of ours that begs us to find a better way to live.

Dave Kerzner opens the set with “Stranded” taken from his 2015 progressive rock concept album “New World” which is, in my opinion, the best progressive rock album to come along in over 3 decades. I can’t say enough about this album except that everyone should have a listen to the entire thing and then go out and buy it…Dave Kerzner is awesome.

BRYAN V., ROBBY DEAN, NATHAN WEBB and ADAM RICE remind us that life is short, and not to waste it. An excellent song with a great message. One of the best from 2014.

Closing out the set is Tom Moriarity with “Finding a Better Way” taken from his 2013 five song EP “Snapshots of Reality”. The EP is well named and a hidden gem from 2013…Snapshots of Reality does just that, as the music and lyrics deliver satisfying, mellow and meaningful expressions to resonate with the listener.

Finding a Better Way is exactly what, collectively, we all need to do to make this world a better place.


Our 3rd set of music brings the energetic rock n roll vibes of Peter Case together with the doo wop pop sounds of “The Chemistry Set” and a retro 70’s pop tune from Ancient Cities. The sounds you are about to hear might qualify as a time trip to the past. A great upbeat foot tapping set to end the show.

“I Shook his Hand” was first released by Peter Case in 1986 as song “A” on a 2 song 7” flexi disc with record label “Nineteen” which was actually a rock 'n' roll fanzine from Toulouse, France that came with a flexi single inside.

Although, I don’t have a copy of the original one, I do have a wave file which was Recorded live at The Golden State Theater in Monterey, Ca. on March 30, 2013 with Deep Ellum…What can I say, this is Classic rock n roll, by a great musician, and band! Stay tuned as Peter Case Rocks the house down!

Following Peter is “The Chemistry Set” with International Rescue from their 2016 album “The Endless More and More”. This song is a real catchy retro doo wop 60’s pop tune that reminds me somewhat of the exciters, the Monkey’s and the Cookies, as it captures the nostalgic vibes of those times by the hooks and upbeat catchy waves within its infectious matrix. Listening once is not enough. Paul Lake, David McClain, and Dani are The Chemistry Set

Closing out the show is North Carolina’s “Ancient Cities” with their song “Sorceress” taken from their 2016 album “Super Moon Blackout”.

This song belongs in the 70’s sea of pop with songs such as Hitching a Ride by Vanity Fare, Beautiful Sunday by Daniel Boone and Love Grows where my Rosemary Goes by Edison Lighthouse…I swear these guys must have a time machine because they seem to be able to cover a variety of genres and time periods as if they were there and then to bring back the ambiance and nostalgia of those times into the 21st century. This is euphoric music for pop freaks like myself…and I have to say that if this song was released in the 70’s it would have gone platinum many times over. Hats off to Stephen Warwick, Justin Fedor, James Dulin, Justin Faircloth, and Matt Branniff of Ancient Cities.

And that’ll do it for another episode of the Minstral Show, now, let’s get into this time machine and blast off…see you next week!

Be sure to visit the artists websites and join their email platforms to find out what they are up to (See Links Below).