Legends of Rock: The Fixx 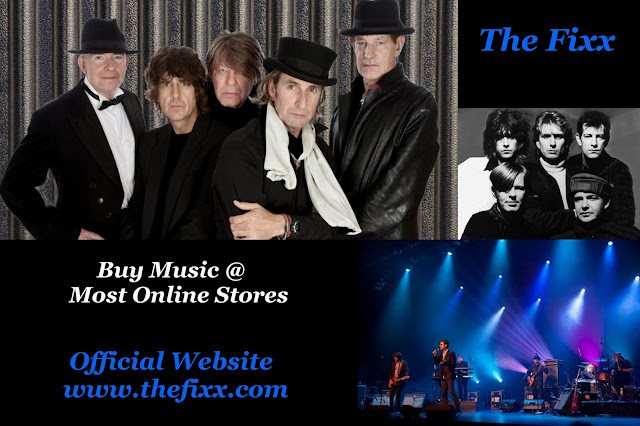 The Fixx are an English rock and new wave band formed in London in 1979. The band's hits include "One Thing Leads to Another", "Saved by Zero", "Are We Ourselves?", and "Secret Separation", all of which made the U.S. Top 20, as well as early MTV Video hits "Red Skies" and "Stand Or Fall" and Mainstream Rock chart hits "Driven Out" and "Deeper and Deeper," the latter of which was featured on the soundtrack of the 1984 film Streets of Fire.

College friends Cy Curnin on vocals and Adam Woods on drums formed the group in London in 1979, initially calling themselves Portraits. The pair placed an ad for additional members, and recruited keyboardist Rupert Greenall, guitarist Tony McGrail and bassist Russell Mckenzie later to be replaced by Charlie Barrett. Portraits issued two singles for Ariola Records: "Little Women" (1979), and "Hazards In The Home" (1980).

Later in 1980, McGrail left. At this point, the band added guitarist Jamie West-Oram (formerly of Phillip Rambow's band) and changed their name to The Fix. This version of the band recorded for 101 Records, releasing their first single ("Lost Planes") in February 1981. This track, along with several live tracks issued by 101 on various compilations, received some radio exposure on the BBC. In these early days West-Oram was billed simply as "Jamie West", and keyboardist Greenall occasionally used his full name Rupert Peter Greenall.

The Fix's raised profile eventually led to the group being offered a contract by MCA Records.[1] Worried about the potential drug-user implication of the band's name, MCA insisted on a name change before signing them to the label. A compromise was reached as the band altered the spelling of their name to The Fixx, and a deal was duly inked.

Barrett left The Fixx just after the recording of their first album, Shuttered Room, in 1982. This album featured the band's initial hits, "Stand or Fall" and "Red Skies," both of which charted in the US and the UK. The band found particular success in Canada, where "Stand or Fall" reached the top 40. "Stand or Fall" entered the charts in the U.S on October 30, 1982.

Barrett was replaced on bass by Alfie Agius for the Shuttered Room tour. Agius' stay in the band was short-lived, though, as he left during the 1983 recording of their next album Reach the Beach, after having recorded four tracks. Agius is credited as co-writer on all the album's tracks, but the group for this album was officially credited as a quartet (Curnin, Greenall, West-Oram and Woods). Agius went on to briefly tour with the hard rock/heavy metal band, Fastway that same year.

Reach the Beach became (and remains) the group's most commercially successful album. Agius' bass work is featured on the album's first two singles "Saved by Zero" and "One Thing Leads to Another."[2] Both these singles cracked the US top 40, and "One Thing Leads To Another" became the band's biggest-ever hit (No. 1 Canada, No. 4 US). It was during these sessions that bassist Dan K. Brown joined the band. Brown played bass on the third top 40 single from the album, "The Sign Of Fire" and continued with the band on its subsequent tour. Brown became a full member of the band thereafter.

The 1984 album Phantoms contained the hits "Are We Ourselves?" and "Sunshine In The Shade." Another song from the period, "Deeper And Deeper," was released as the B-side of "Are We Ourselves?" (and also appeared in an edited version on the soundtrack for the film Streets of Fire). This track received substantial airplay on U.S. and Canadian modern rock radio stations.

In 1985 The Fixx recorded the song "A Letter to Both Sides" for the soundtrack of the film Fletch. In 1986 they released their fourth album Walkabout, containing "Secret Separation" (No. 1 on Billboard Magazine's "Album Rock" chart) and "Built for the Future." The 1987 album React, containing both live and new studio material, was the last for MCA Records.

1988 saw their return with a new album Calm Animals and a new label RCA Records. This album contained another U.S. hit "Driven Out" (another No. 1 on Billboard's "Album Rock" chart).

Dan K. Brown left the band in 1994. He was not officially replaced, and the band used session musicians on bass in his stead, with Chris Tait playing bass on most recordings and live shows from 1995 through the early 2000s. The four man line-up (with contributions from Tait and other sessioneers) recorded 1998's Elemental and the 1999 album 1011 Woodland on which they re-recorded a selection of previous hits and album tracks.

In 2002, The Fixx performed Nancy Sinatra's 1960s classic "These Boots Are Made for Walkin'" for an album of cover versions of songs from the 1960s to 1990s called When Pigs Fly.

In 2003, the band released their ninth studio album, Want That Life. Gary Tibbs, formerly a member of Roxy Music, The Vibrators and Adam and the Ants was installed as an official member on bass for this album.

Long-time bassist Dan K. Brown re-joined the band in 2008, replacing Tibbs. They celebrated 25 years of making music together, with the release of the 2-CD Twentyfifth Anniversary Anthology compilation.

With the classic lineup back intact, The Fixx released their 10th studio album Beautiful Friction on July 17, 2012. The Fixx regularly tour the US.