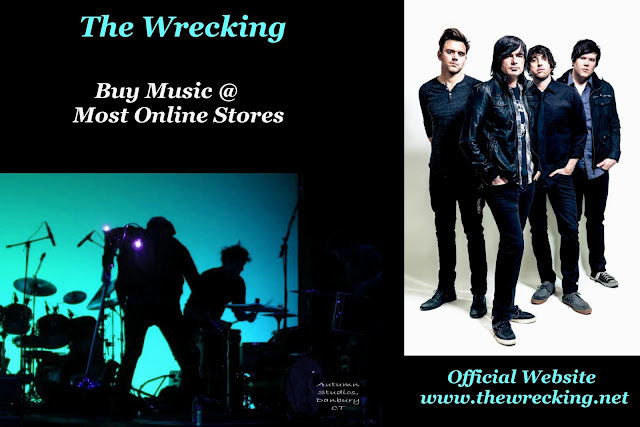 About: The Wrecking
The Wrecking is defined by an unparalleled drive for what is deeper. Musically, emotionally and spiritually, this band communicates on a level that is undeniable.

Previously featured in USA Today for their latest EP "The Catalyst,"  capturing a spotlight on lead A&R sites Crazed Hits/Kings of A&R, and having graced the cover of the industry leading R&R magazine, the 4-pack of musicians are commonly referred to as perfectionists in their obsessive pursuit of sonic excellence and explosive execution. The Wrecking has cultivated a truly unique sound that is readily accessible by interlocking hook-driven rock with urban grooves and futuristic adventurism. They have emerged from the East Coast music scene as a national critically acclaimed powerhouse, touring close to 200 dates a year across the U.S. from churches to sold out music festivals in front of thousands; along side like acts such as Sanctus Real, Jars of Clay, Third Day and more.

Besides recently selected as a featured artist with GRAMMY U,  The Wrecking singles "About to Fall," "You Remain," and "Sound of Resistance" have topped the charts at AIR 1 radio. Their debut album "A New Abolition" ranked #38 on Billboard's Top Christian/Gospel Album's Chart and #32/Top Current Contemporary Christian. Their raw cover of the ever popular U2's "Get On Your Boots" was named Best of YouTube and captured over a quarter of a million views.

Explicit sincerity as musicians as well as people has allowed The Wrecking the ability to seamlessly navigate between Christian and mainstream venues with instant credibility and great success. As drummer Darren Elder explained in a previous interview, "Christ has changed my life and the lives of all the guys in the band, and we are so thankful for that, that's the essence of what the songs are about. But, we truly respect what anyone believes and want to be sensitive to that, we just want to say, Hey, His love is beautiful and it sustains us."

Named "Top 10 Artists to Watch" by Go Magazine, featured on Amazon.com as Artist of the Month and named by iTunes as "Rising Stars," their passion for music and connecting the world to what is deeper, has sparked an ever-increasing blaze of hope-inspiring songs that serve as a battlecry for the abolition of slaves around the world.

With a stunning debut recording and a reputation for an exacting live show, The Wrecking is releasing some of the most buzz worthy songcraft emerging from today's alternative music scene.