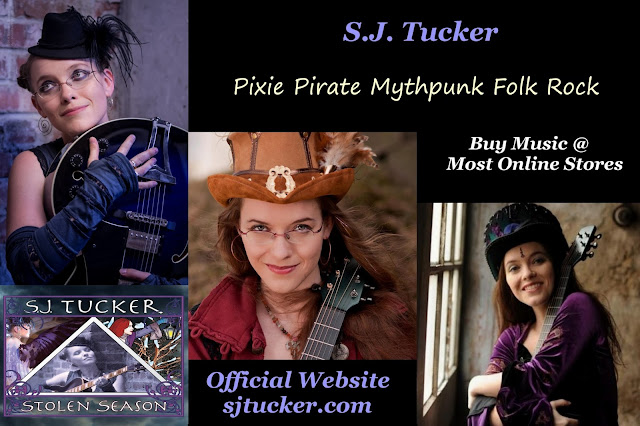 “Without our songs and stories, we are nothing.” S. J. Tucker has been the glad captain of her own independent music career since 2004, when she left the workaday world behind to travel the continent, singing songs and changing lives.  Named a vanguard of the Mythpunk movement and even “the face of neo-tribal Paganism” by Witches & Pagans Magazine, Tucker is the voice of lore at the campfire and the sharp laughter of modern myth. With one hand anchored in her art and the other held out to you, she is songs and stories, community and wit.

With over ten albums released to date and several more currently in the works, Tucker has received songwriting awards and has traveled the United States, Canada, and Europe with her music.  S. J. (called “Sooj” by fans and friends) believes that there’s more than one way to be a rock star. If you’re chasing your dreams and living your life in a way that keeps you happy and healthy, Sooj believes you’ve got it made.  You may often find her on tour with similarly hard-working artists and groups who believe in giving their fans all that they’ve got, such as Toronto’s Heather Dale Band, Seattle cellist Betsy Tinney (often with their shared project, Tricky Pixie), or Pride rockers Big Bad Gina.

A dynamic live performer known for her willingness to follow an evocative ballad with a tune about ninjas or pirates, Tucker is never in danger of taking herself too seriously. She lets it be plain on stage that she loves her job, but she also shows grace and calm, courting and cajoling her audience.  Reviewers compare her voice to that of Joni Mitchell or Tori Amos, her guitar work to that of Emily Saliers.  Apart from writing lyrics and music, S. J. loves fire dancing with poi and hula hoop and has given fire performances & workshops across the country.  Additionally, she has worked as a professional audiobook narrator and an indie film score composer.

In 2014, S. J. celebrated ten solid and joyful years of touring and performing.  This year, she’s released a new album called Stolen Season, which explores her Mississippi Delta jazz and blues roots more than ever before.  On her plate for the rest of 2015 are such treasures as a new illustrated book based on her Wendy & Peter Pan songs (with an album to follow), a myths-and-literature-inspired song collection called Stormchaser, a video game soundtrack, and a long-awaited follow-up to her spiritually focused Blessings album, called Rootless.