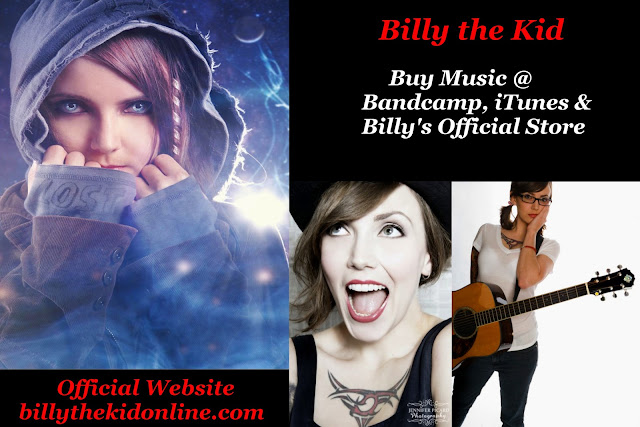 About: Billy the Kid


From comparative isolation growing up in Vancouver, Canada – the second largest country in the world – to being embraced by a global community of friends, Billy the Kid has done it all through her dedication to music and plain hard graft.

The independent spirit has long been a driving factor in Billy the Kid’s long road to her proudest recorded moment, her fourth album as Billy the Kid, Horseshoes & Hand Grenades. Whether touring in energetic punk band Billy and the Lost Boys, or playing on her own through circumstance (her band not showing up) or choice (not wanting to give up), Billy used her time wisely. “I guess that’s the thing about being in the trenches and being independent for a whole lifetime. I pretty much resigned myself to the fact that if I was lucky, I would get to play music on my two week vacation from whatever job I had. The times when music is all I do is still so unbelievable to me.”

Starting “around the time that I started writing songs instead of essays and going to shows instead of class”, Billy has assembled bands and played shows as often as possible. 2008 saw the release of her first solo record The Lost Cause. This was followed by 2010’s Ours, 2012’s Stars, Exploding – recorded with Billy’s dream producer, Ryan Adams’ Cardinals bandmate Jamie Candiloro and 2013’s Perspective – which Billy produced and played everything on. All were crafted with the aid of money garnered from crowd sourcing campaigns. Fans have also helped her tour Europe, become her penpal for a year in exchange for album funding, and even helped her get home when stranded in London with no money after a promise of a tour fell through. With no flight back home and no way of working she decided to launch a pre-order campaign for a children’s book and with all of the interest she garnered from this, Billy managed to save enough money for a flight home.

It’s this innovative thinking and dedication to her talents that have not only kept fans on board, but enabled her to keep everything on track, even during the toughest times. The most recent example being the month-long European tour with Chuck Ragan and Northcote in June 2014, which was almost entirely paid for with 10 days worth of incredible, unique paintings which were sold to the highest bidders – all while convalescing from a serious ankle injury.

But the key thing in all of these campaigns was always to make sure fans felt they’d got their money’s worth, meaning lots of hard work mixed with a little fun. “Before any of these things ever happened I always got really worried that people would feel ripped off and demand their money back. What actually ended up happening was that I made some very important friendships that will stay with me for the rest of my life,” says Billy.

After three records made DIY, Billy considered abandoning the idea of making music regularly. But a chance meeting with Frank Turner in Toronto led, after a few months, to a whirlwind recording session in London, England, with Frank at the helm. In only 10 days, the combined work ethic and tight, tour-refined playing of Billy, Frank, and Sleeping Souls drummer Nigel Powell made for a relatively smooth process, and a record tingling with adrenaline.

“The best advice anyone in music ever gave me was that anytime things felt normal and natural, they always worked out. Any time things were supposed to be a big deal and really super important, they never really worked out. I kept thinking of that when we were making Horseshoes & Hand Grenades because everything just seemed so normal and happened so fast. I really wasn’t worried about anything because we were just three people in a room making songs. That’s really all I’ve ever wanted to do or tried to do.”
“I definitely took Frank’s lead as far as how to approach the recording process.

Eventually it became apparent that we were a pretty good team but he came up with the concept of recording ‘live off the floor’ which I think contributed a lot to the finished product. He was hoping for something with some dirt under its nails, a little more raw than some of my earlier albums. I think we accomplished that as well as some stuff we weren’t expecting. I just think it sounds badass.”

It is badass. Billy’s voice is immediately introduced on album opener ‘Phone Bills’, while Nigel’s ricocheting drums hesitate, roll and jump ahead of her, then everything collides in synchronicity. From then on it’s unmistakably Billy’s show as the extra personnel merely bolster her sleepless melodies and seasoned acoustic playing, both enriched with many miles of travel and tangled, long-distance bonds with close friends.

When playing the role of storyteller away from the autobiographical, she’s just as effective. The Quarry’s sublime picking leads into evocative lines about fleeing an unnamed town, the stumbling drums playing the part of unknown pursuers’ rapidly gaining footsteps. Meanwhile, ‘This Sure As Hell Ain’t My Life’ is a duet with Frank Turner that tells of a couple’s disconnection. ‘Lord Let Me’ recalls her Irish grandmother and English grandfather in a riotous song which reflects the difficulty her elders must’ve faced in Ireland.

Billy’s former isolation hasn’t done any harm though, and she proves it with strident confidence on solo run-throughs of’ Thoroughfare’ and the heartbreaking ‘Chelsea Rose’. Her studio buddies are there to lend a hand elsewhere with spontaneous gang vocals, or a little mandolin spring.

“I don’t know what it’s going to mean as far as what comes next,” Billy muse, “but I definitely feel like it is the culmination of each album of mine that came before it: the punk rock band, the early solo albums, the stuff I produced and played every instrument on. It was a fine moment to end up in a studio with someone like Frank Turner and half feel like I knew what I was doing.”

It would be wholly unjust not to ascribe the ultimate success of Billy’s fundraising efforts and the highest musical accomplishment so far to her, and the one thing she has clung to throughout her time on this planet.

“Work. Just always do the work. None of this stuff happens by accident and none of it would exist without some sort of effort. I always just tried to work as hard as I could, all the time.”

The results are astonishing. A hearty live presence that invites collaboration with tour mates and audience singalongs, songs to clasp to hearts, and a connection that extends beyond listener and artist but even to a network of like-minded musicians and friends.

“There’s this great community of musicians who are not only great at their craft but just the best people. I’ve never felt so welcomed and encouraged in their presence. It’s a real honour to be considered amongst friends when you’re playing shows with people whose albums you adore.”

As Billy’s new union with Xtra Mile, and a host of fresh listeners open to her honesty, unguarded nature, and deep-rooted musical palette is cemented, she remains humble, stalwart and eternally grateful.

Billy said it best in Xtra Mile’s first podcast: “I felt really lonely in (Canada) for a really long time and I always felt like maybe people didn’t get it. I was always touring in a car back and forth driving for 10 hours a day by myself and it wasn’t until I went overseas or playing in the US that I started to see ‘hey, I’m not that different! There are other people doing this and they’re as crazy as I am and they travel as far as I do!’”

Whether they can go as far as Billy can is still unproven, unlike the unrestrained ambition of this young Canadian songwriter.

“I have a feeling this kid doesn’t know what “impossible” means.”- Alan Cross
“Billy the Kid is an amazing talent.”- Patrick Zulinov, Shore FM

“Her music is the perfect combination of edgy sweetness that ventures into the grittiness of the life in the city.”- Tamara Stanners, The Peak FM

“Prolific and incredibly talented.” – The Leader-Post

“With her popularity spreading and in no sign of waning, her many musical endeavours are beginning to pay off and no one deserves it more. After a chat with this winsome pixie, it would be difficult to dislike her.” – The Gauntlet Magazine

“I bought her independently produced CD on the spot and have been trying to find out as much as I can about her because I know she is going to be huge one day soon.” Canoe Live

“One of the best female guitarists I’ve ever met.” – The Daily Nar

“(Billy)’s the kind of thorough, do-it-yourself poster girl that will go to hell and back in order to put out a good record.” – Beatroute Magazine

“Bespectacled singer/songwriter and D.I.Y. poster girl Billy the Kid possesses an impressive arsenal, including an enchanting voice, strong musicianship, and well-crafted tunes. Expect Billy to wear her heart on her (tattooed) sleeves.” – A Lawyer

“If you need any inspiration to keep your New Year’s Resolution “I shall cast off the shackles of procrastination and actually do something with myself…” look no further than a young lady who goes by the name of Billy the Kid.” – Chartattack 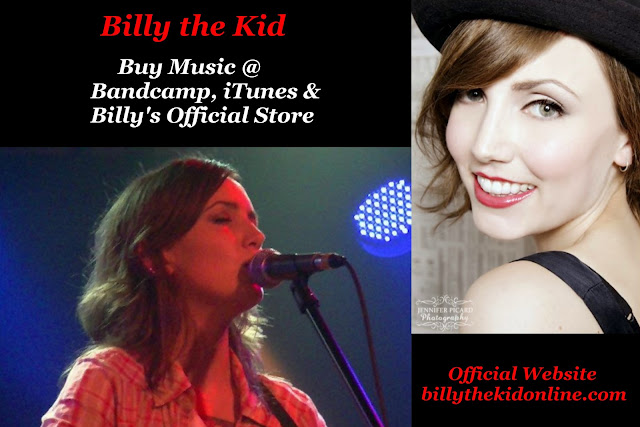