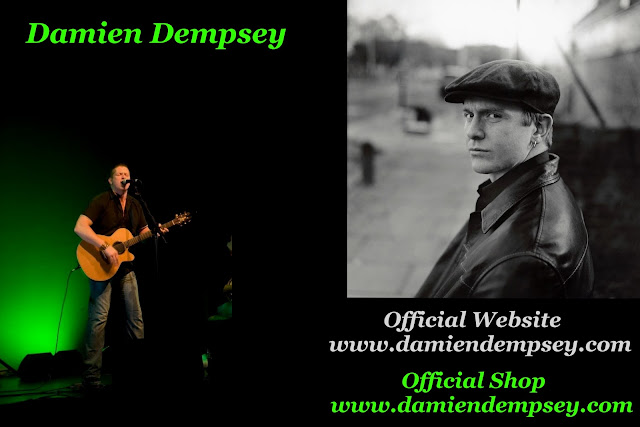 An imposing six foot two, Dempsey is a former amateur boxer and a survivor of street gang culture. His youthful audience identify with a singer who has emerged from the rough working class streets with his powerful self belief intact. And his lyrics - “Stevie smashed the delf / ‘cause he can’t express himself / He’s consumed by rage / Like his father at his age” - speak of their shared childhood experiences.

But the optimism that he reaches for amidst Ireland’s industrial and social collapse - “I can see the evil, but I can feel the good, shining out to greet me” - is an inspiration to his burgeoning troubled audience. His concerts can be almost spiritual occasions – his fans sing along to every word and look to him as a leader for expressing such intense social and cultural concerns. Dempsey is reminiscent of Terry Malloy the prize fighter turned longshoreman in Elia Kazan’s On the Waterfront – a man whose conscience forces him to speak the truth, despite the consequences of his honesty.

The Times recently described Dempsey as “the Bob Marley of Ireland”; a comparison which holds true when one witnesses the devotion of his audience and his charismatic presence on stage. “Going to a Damien Dempsey show was like stumbling on a secret society” observed David Sinclair. “The audience greeted him like a superstar.”
His singular stage presence was nurtured by the legendary Irish Folk singer Christy Moore who in mentoring a shy, young Dempsey advised him, “if you’re nervous, tell the audience you’re nervous”. Dempsey concludes “the audience has always been with me. They feel what I feel.”

Since his first concerts in 1995 Dempsey has come to be regarded as the pre-eminent Irish singer songwriter. The Irish Examiner wrote that “he now stands as one of the most important and evocative Irish singers of all time.” Morrissey, who was deeply moved by Dempsey, declared that “to hear him sing is to realise the magnitude of his astounding voice and heart. The songs are true, and his is the best and often the saddest voice of this generation.” And it’s a generation that Dempsey is compelled to speak up for: “the kids have no religion now, nothing to look up to. I try to teach them about their history and lead them towards spirituality, give them some light and some purpose”

Yet Dempsey’s music and vision extend far beyond Ireland itself. He speaks to Africans, Aborigines, the dispossessed and underprivileged, never more poignantly that on his 2005 song “Colony” - “how many years and sure still we’re not free, and your mother cries and you ask God why. Greed is the knife and the scars run deep, how many races with much reason weep. And your children cry and you ask God why.” Dempsey has travelled on his with his guitar throughout Australia, and America and his empathy for the people he's seen is palpable. “Those people [the aborigines] have a spirit that we have almost lost. They have kept a spirituality that we’re not preserving.”

As a child Dempsey was influenced by Christy Moore, Luke Kelly, Shane MacGowan, Bob Marley and Elvis Presley. He attended a music school at Ballyfermot College of Further Education. When he graduated in 1995 the college released his debut EP, The Contender, on their own imprint. In 1997 he released a single “Dublin Town” on the tiny Treasure Island Discs. Although the song went to number 18 in the Irish charts, Dempsey didn’t release his debut album until three years later. In March 2000, They Don’t Teach This Shit In School, established Dempsey as an exciting new talent and attracted the attention of Sinéad O'Connor who took Dempsey out on tour and championed him as an important new talent . “I don't think there's ever been anyone like him. I think he represents the sort of voice in Ireland that is not allowed to be heard" she said.

His second album, Seize The Day, released in May 2003 featured contributions from Brian Eno and Sinéad O'Connor and began a successful artist producer relationship with John Reynolds. Seize The Day marked an artistic leap for Dempsey. He had matured as a writer and was garnering praise from some of the most prestigious publications in the world. “He writes about the street life of suburban Dublin, in all its glory and malice” observed The Sunday Times, “with an evocative and unsentimental affection rarely seen.” Morrissey became a passionate patron of Dempsey’s music, taking him on a full North American, British and Irish tour, releasing Seize the Day in the USA on his Attack imprint and championing him tirelessly in the press. The album won two Meteor Awards, the Irish equivalent of the Grammys.

But it was with Shots in 2005 that Dempsey delivered his masterpiece and his defining album. Backed by Eno, John Reynolds and Justin Adams, the music achieved a new finesse and songs like “Sing All Our Cares Away” and “Not on Your Own Tonight” were bracing views of Irish society that were both shocking and compassionate. On “Colony” he spoke of the bloody colonization of the world and identified his own countrymen with the indigenous people of Africa, Australia and America: “They raped, robbed, pillaged, enslaved and murdered / Jesus Christ was their God and they done it in his name / So he could take the blame if it's not all a game / With bible in one hand and a sword in the other / They came to purify my land of my Gaelic Irish mothers / And fathers, and sisters and brothers” The Times described it as “a powerful fierce polemic, sung with quivery emotion”. His mentor Christy Moore observed that “Damien uses his own language; he's not looking to Hollywood for his vernacular” and proudly added, “when Damien reaches where he is going to reach everyone will say 'we always knew he'd make it - we've always loved him from the very start'.” The album topped the Irish charts and went Platinum. He released his first live album, Live at the Olympia which captured the enthusiasm of a wild Dublin audience. He then toured the USA coast to coast and was honored as Best Irish Male at 2006's Meteor Awards.

In 2007 he released To Hell or Barbados, which debuted at number two in the Irish charts. It was a harder edged record that opened with the brutal “Maasai”; “When I die / I want to die / Not in a home built for the unknown / But by the hand of a Maasai / When I love / I want to love / Not like some swine with no semblance of spine / But like a flower loves sunshine.” The album’s title referred to the 50,000 Irish sent as slaves to Barbados by Oliver Cromwell in the 1600’s. The Guardian stated that “To Hell or Barbados confirms Dempsey’s position as one of Ireland’s great singer-songwriters”. The album debuted at number one in the Irish charts and won him the Best Irish Male award at the Meteors for a second year running (he has won six Meteor Awards to date).

In 2008 he recorded a set of traditional songs with the Dubliners for his fifth album, The Rocky Road. Mojo wrote that “listening to the ancient folk anthems like 'Kelly from Killan' and 'The Hot Asphalt' it’s like hearing a social history set to music, but the arrangements lend the performances a stirring mix of grit and grace”. Dempsey said that he recorded the album not for the old folk music guard but the teenagers who came to his shows; “I have a lot of very young fans, so naturally these kids are gonna hear all these timeless songs that they may not have heard otherwise. I want to give the young kids an alternative to the new MTV generation, gangster rap, Britney Spears and maybe get them interested in their own history through music”.

The live tour that followed demonstrated that Dempsey had equaled and surpassed most of his peers, The Guardian noting that Dempsey’s “musical heroes are now his admirers”. He had become the most vibrant and vital Irish live performer working today. Having played with Willie Nelson, Bob Dylan, U2 and The Pogues, Dempsey’s stage craft and voice had become so powerful that it prompted Bono to say “when he opens his mouth - it's like the end of the world."

After returning this summer from an extensive furlough in South East Asia and Australia, where he was invited by Brian Eno to perform a sell out concert at Sydney Opera House as part Eno’s inaugural Luminous Festival, Dempsey was asked by U2 to support them at the Croke Park concert in Ireland. He has begun recording his sixth album with John Reynolds. It promises to consolidate his position as one of Ireland’s greatest ever songwriters. As Shane MacGowan recently explained “It's great music and it’s great lyrics. It's angry and it's humorous. He sees the beauty that is Ireland and that is Ireland's past and that can be Ireland's future.”

"...one of the greatest songwriters of his generation" - Irish Abroad (USA)

"To Hell or Barbados is folk and roots rock with substance, with the sound of Ireland mixed in for good measure. A most intriguing cocktail." - Billboard

"It's clear from the first moment he sings a note that Damien Dempsey is one astonishingly gifted individual" -The Daily Express, London - 5* review of To Hell or Barbados

"This is a hearty, fraternal embrace of an album" - Telegraph (Shots)

"If you need to be convinced, look no further; Damien Dempsey is the real thing" -Hotpress (Live at the Olympia)

"...the future of Irish songwriting is in good hands" -Irish American News (Shots)

"...America is about to hear a voice she will not want to forget" - Irish Voice(Shots) 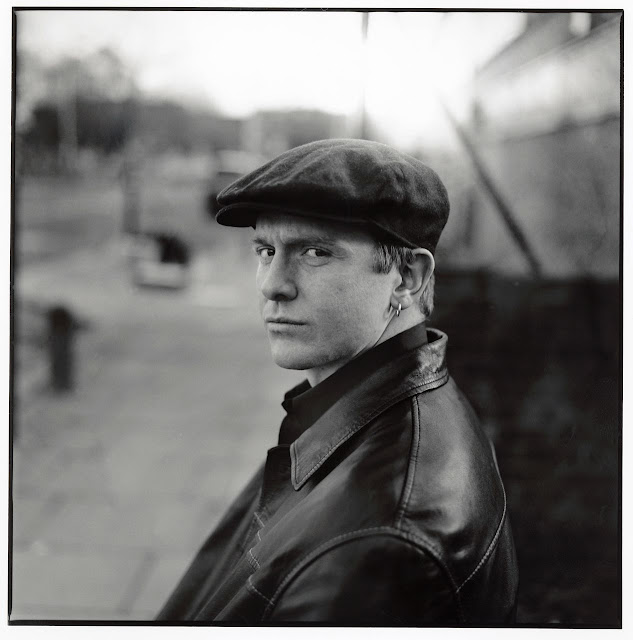