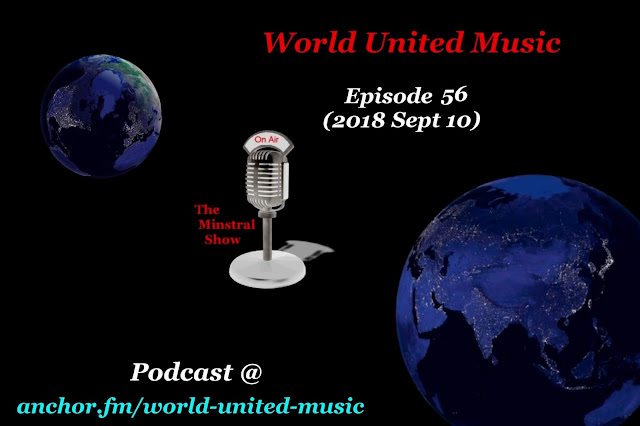 
Opening today’s program is Hoobastank with the title track of their December 2003 album “The Reason”. This song is a personal favorite of mine in lyric, music and in the passion in which it is delivered. It’s truly a great song of emotional healing. The album went double platinum in the US alone selling 2.3 million copies which is a testament on how good the album is. Incidentally, Hoobastank will be on tour from October to December 2018 for the 15th anniversary of their album “The Reason” so this is a great time to play the song and check out this band if you don’t know them already. Great stuff.

Rust is a wonderful Pop rock song about looking back in time…a very well produced sound, full of hooks to send the approval meters into gold territory…it has that summers end feel to it as well, that makes it especially likable as we pass through the days of September looking back with a farewell to summer. A very pleasant and enjoyable song.

Seattle Washington band “Ivan & Alyosha” follow with “Be Your Man” taken from their 2013 album “All the Time We Had”. Another, up beat, feel good, energy booster kind of song that harnesses the youthful excitement boys show when interested in girls. Love this tune. There’s a good video of the song on YouTube that deserves a million more hits so please do check it out…Ivan & Alyosha – Be Your Man

The Laughing Apple brings Yusuf's career full circle, as it reunites him with producer Paul Samwell-Smith and guitarist Alun Davies who were prominent collaborators on the 1970's multi-platinum, Tea for the Tillerman.

“See What Love Did to Me” is the wonderful result of Yusuf's search for spiritual meaning put to music that expands the fantastic creative expressions of the Tillerman days. This song is very catchy AND one listen is not enough. I love this tune.

And so we offer, a set of passion, longing and love to pick your spirits up, on the Minstral Show.


Black-heath Australia band “Wheat Fields” kicks off our second set with “Let’s Play” taken from their 2013 Album “Saturnalia”… “Let’s Play” is a laid back psychedelic tune that puts the mind at ease and releases the listener into an expanding universe of mello…I love the state of mind this song leaves me with. It’s really Good stuff.

From Sweden, the Greek Theater follow with “Still Lost at Sea” taken from their 2017 album “Broken Circle”. “Still Lost at Sea” reminds me of the infectious Pop sounds of the 60’s…songs such as “How Can I Be Sure” by The Young Rascals, “You Showed Me” by The Turtles and “You didn’t have to be so nice” by the lovin spoonful come to mind when I hear this song. In fact, I’m convinced that if this song was on the radio back then it would have gone multi platinum for sure…it’s certainly a pleasant and refreshing sound amongst all the noise that passes as pop today…good laid back sounds.

Saintseneca from Columbus Ohio follow with “Beast in the Garden” from their August 31st 2018 release “Pillar of Na”. I love the harmonic sounds in this song, the old and new folk instrument’s and the way the vocals blend with them. It certainly caught my attention the moment the album dropped a few days ago. “Beast in the Garden”

Marqui Adora from Miami Florida follow with their 2008 single “Catch the Sun”. Here’s an upbeat feel good tune that celebrates our youth, through the time and life we spent together with friends…a time when it felt that we could reach out and catch the sun and live forever. If you love singing, this is a good one to sing to.

Marqui Adora have put out some excellent music in the past and certainly deserve mucho radio play…a band I feel that is very underrated.

And so, “Let’s Play” while we’re “Still Out at Sea”, but beware, “The Beast in the Garden”, while trying to “Catch the Sun”, on the Minstral Show.


“Travel Mind Syndrome” from Athens Greece start our final set with “Breeze of Light” taken from their 2010 Album “East Action to Saint Friday”.

“Breeze of Light” is a song that recalls the memories of a past love that sparks a beacon of light to guide the way for that special person to return. Very positive energy by Travel Mind Syndrome.

"Feel Like Home" is about embracing the familiar while away from home in a strange place. A good connecting song when on the road.

The song is also used as the community anthem for the Des Moines, Iowa "Do More" campaign… What a great choice of songs for a community program. Very positive with a big thumbs up

Houndmouth follows with their 2015 single “Sedona”.

The song refers to “Sedona Arizona” a little town that played host to more than 60 Hollywood movies through the 1920’s to the 1970’s including the first big movie filmed there called “Stagecoach” produced by John Ford. It’s a great little tune that tells the story of the rise and fall of the movie industry there. Sedona!

Chris de Burgh closes today’s program with “Big City Sunday’s taken from his 2014 album “The Hands of Man”. A fantastic album by the way if you haven’t heard it.

“Big City Sunday’s” is a song written with passion with the emotional connection to home. We always feel a little alone when far away and in that loneliness our thoughts often turn to youthful days of home, the place where everything’s ok, the place we live forever.

And so a set of deep connecting music with thoughts of friends we will live forever with, in the places we call home, on the Minstral Show.

See you next week everybody.

Be sure to support the artists by going to their official websites, buying their music and joining their email platforms. (See Links below.)