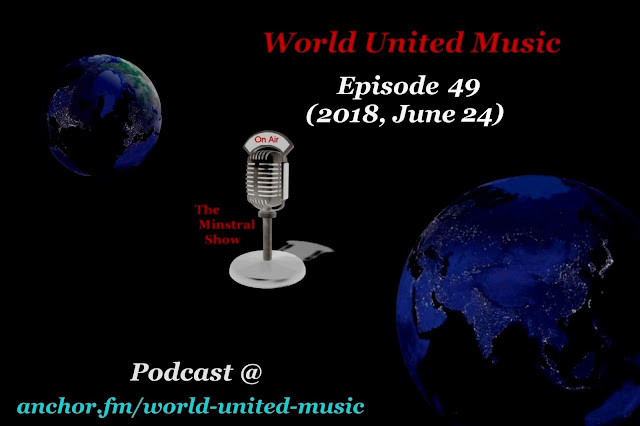 A full array of songs, roar across the net like a digital comet, as episode 49 begins from the light and moves towards the darker waves and atmosphere on the spectrum of music, featuring: Robert Plant, Temples, Goat Girl, Art D’Ecco, The Gorlons, Secret Colours, Sea Pinks, Black Mirrors, Holy Wave, Future, Has a Shadow, and Alice Cooper.


Robert Plant starts us off with “The May Queen” taken from his October 2017 album “Carry Fire”
“The May Queen” is an energetic and captivating song from first note to last, a wall of acoustic sound with a catchy beat that carries a great voice from the early days of Led Zeppelin. Robert Plant truly delivers a great tune from a stellar new album.

Temples follows with “Prisms” taken from their 2014 EP “Shelter Song” - “Prisms” is a Retro 60’s Psychedelic Pop tune that brilliantly pulls the curtain away from the mysterious prism of the day. TV. A very catchy song by a band that seems to time shift their musical talents without effort.

Goat Girl follows with “Crow Cries” a single released in August 2017 that lyrically points out the hypocrisy of a generation’s belief while the obvious stares everyone in the face…a short but compact song that expresses the irony of a generation against the reality of today’s world.

Art D’Ecco closes the set with “Nobody’s Home” a June 2018 single
With a Bowie / New Wave-ish aura that crests out of the Gulf Islands of BC Canada. An excellent song just released on Paper Bag Records that is going to do very well.

And so, here’s the first set of music from the lighter side of grey, on the Minstral Show.


From Springfield Missouri, The Gorlons open the second set with “Stare into the Sun” taken from their 2014 debut, self titled album, “The Gorlons” an album that is filled with awe inspiring sounds that time warps the listener into the future as well as the past at the same moment...like a tempest in a tea cup, this band delivers.

Next is “Secret Colours” from Chicago with “It can’t Be Simple” taken from their 2014 album “Positive Distractions”. I loved this tune the moment it dropped due to its retro 60’s psychedelic Pop sound, a sound I personally can’t seem to get enough of these days and it’s One of many great tunes by Secret Colours.

Closing the set is Belgium’s “Black Mirrors” with Funky Queen” a 2016 single re-released on Napalm Records in 2017.  “Funky Queen” packs a wallop with a pause, build-up and explosion that is guaranteed to grab your attention and make you scream into music ecstasy! I’m an instant fan.

And so, staring into the sun can’t be simple when the dream’s happening with a funky queen, On the minstral show.


Starting off the final set is Austin Texas band “Holy Wave” with the title track to their 2014 album “Night Tripper”. – a song that meshes New Wave / Dark Wave, Garage rock and psychedelic rock into a Holy Wave of sound…a big thumbs up.

Next, from Paris France is “Future” with “Skylights” taken from their 2013 EP “Abyss”,

“Skylights” is a driving Dark Wave / Garage Rock tune that one might find in a movie to drive home the eerie atmosphere of the empty city streets outside a packed dance club in the late hours before something major happens. The band delivers a sound that echoes warning and leaves an impression on the listener.

Following “Future” from Guadalajara Mexico is, “Has a Shadow” with the title song of their November 2013 debut album “Sky is Hell Black” a progressive dark wave tune that tells of a looming oblivion from the night sky…a song that captures that eerie goose bump feeling one gets just before something bad happens…which leads perfectly into our final song by “Alice Cooper” with “Fireball” taken from his 2018 album “Paranormal”. An Album that should see a multi platinum award for its rock n roll content alone, certainly one of this year’s top albums.

So, as the song title implies, A Fireball’s come out of the sky to end it all including this week’s episode of the minstral show.

And now get ready to end it all with Holy Wave, Future, Has a Shadow and Alice Cooper, on the Minstral Show.