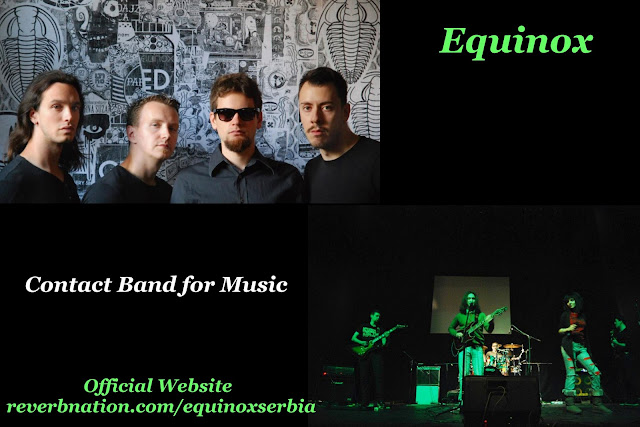 About: Equinox
The Band was created in the autumn of 2007 when a drummer Željko Stanisavljević responded to an add by a guitarist Sava Jović, concerning the foundation of a serious band. The band was intended to be in the realm of progressive rock/metal genre, mostly influenced by bands such as "Pain of Salvation" and "Dream Theater". The search for musicians started as well as rehearsals. During the period of one year, the band was working hard and as a result, a mini EP “Leaving Behind” was recorded in the winter of 2008/09. The EP contains four songs. Even though there were serious problems with stability of the line-up (a guitarist, a bassist and four keyboardists were replaced), the band is now in a stable setting and a promotional tour across Serbia has recently started out. Also, the band is still searching for an adequate keyboardist and vocals, so that they can present themselves in the best possible way.
Contact: https://www.facebook.com/pages/Equinox/69140483086
Promote your mixtape at ReverbNation.com
Equinox - RevernNation
http://www.reverbnation.com/equinoxserbia
Equinox - Soundcloud
https://soundcloud.com/#equinoxprog
Equinox - MySpace
http://www.myspace.com/equinoxserbia
Equinox - Facebook
http://www.facebook.com/pages/Equinox/69140483086?ref=sgm
Equinox - Twitter
https://twitter.com/equinoxserbia
Equinox – World United Music
http://worldunitedmusic.blogspot.com/2011/09/equinox.html
Videos!
Equinox - YouTube
http://www.youtube.com/user/EquinoxSerbia
Buy Music!
Contact Band for music
Posted by Stewart at 5:58 AM