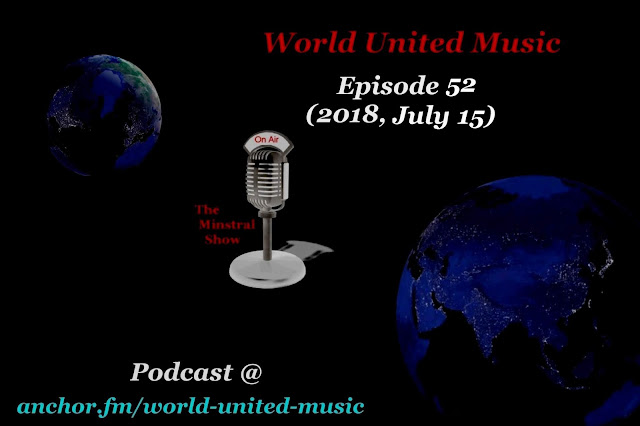 
Staring off today's program is a really powerful set of Pop music to lift your spirits and start the emotive holiday dance with your soul.

From Lancaster UK, Lake Komo opens the show with “ThinkTank” taken from their November 2015 EP “Ritual”.

Lake Komo’s “ThinkTank” is a feel good pop tune that carries an infectious sound and lyric to help the listener escape the insanity of today’s world. A Really good tune and a positive energy driver.

“Turnover” from Virginia Beach follows with “Humming” taken from their 2015 album “Peripheral Vision”.

“Humming” is a dream pop song that expresses the love struck soul’s infatuation and attraction to the carefree and creative individual who lives in an inviting world of their own personal creation. A perfect Dream Pop song in sound and lyric.

Two Wounded Birds follows with “If Only We Remain” taken from their self titled 2012 album “Two Wounded Birds”. “If Only We Remain” is a truly empathic song about the feelings one has when losing someone close, where you find your emotions in free fall, feeling weak at the knees, and feeling the young vulnerable child inside. A 5 star Euphoric Pop tune that is emotionally packed by the delivery of two wounded birds.

Closing the set is Seattle Washington’s “Ivan & Alyosha” with “Running for Cover” taken from their Feb 2013 album “All the Times We Had”.

“Running for Cover” is about trying to make sense of life while walking the straight and narrow path after mankind’s fall from paradise, told through an infectious Pop music and lyric and One of many great tunes by “Ivan and Alyosha”.

And so, here are “Lake Komo” “Turnover” “Two Wounded Birds” and “Ivan & Alyosha”…a soul moving set of music, on the Minstral Show.


South Africa’s “Gavin Coetzee” starts off the second set with “Cinderella” taken from his 2011 album “Orange Forest”. Cinderella is an infectious alternative rock song with a South African vocal beat that breathes life into the atmosphere around you…it’s hard not to move or tap along with this song…a great tune by Gavin Coetzee”

Chicago’s “Secret Colours” follows with the title track to their 2014 album “Positive Distraction”. A neo-psychedelic pop rock tune that is as unique and as crisp as a standout song can be. Good music by a great band.

Next, alternative / Psychedelic Rock Band “The Outs” from Rio de Janeiro, Brazil, follow with “Right or Wrong” taken from their official 2013 debut EP “Spiral Steams” The song brings to mind the 60’s psychedelic pop era bands such as The Byrds and The Zombies which of course concurs with the rave reviews they received on British Radio stations when it was released. Right or Wrong by the Outs.

California Band, “The Spires” follow with “Stereo Images” taken from their May 2018 album “Obscured View” an alternative Rock / neo-psych tune with creatively poetic lyrics that reminds me of “The Velvet Underground”. Their fresh original cuts speak volumes to just how good this band is…stereo images is more than ok, its right on.

And so, Cinderella is a Positive Distraction, Right or Wrong, its in Stereo Images, on the Minstral show.


Starting off the final set is London UK’s Mike Weston better known as “Adult Cinema” with “Time Machine” taken from his 2018 remastered version of his 2007 debut album “This Is Your Life”. The opening lyrics express the song perfectly,

“Everyday I wish for a time machine to Take me back to the day, When the music and houses and people Had style and beauty…but they’ve taken it all away…”

A common observation and belief by a great many people who experienced better times compared to the world in which we are stuck in today. An excellent and very relevant tune by “Adult Cinema”.

Lunatic Soul follows with the title track from his May 2018 album “Under the Fragmented Sky”. The album contains 35 minutes of completely new, previously unreleased music from the Fractured album sessions that, in its way, has its own identity and character but also compliments the character of the Fractured album…”Under the Fragmented Sky is another excellent album by Muriusz Duda.

From Vancouver BC Canada, “Painted Coda” follows with “Dawn” taken from his May 2018 album “The Vanishing”. The album is a progressive rock album that touches on themes of loss and depression and experiments with the classic and hard rock generations of the genre. “Dawn” reminds me of the music composed by Paul Williams that’s played by character “Winslow Leach” in the movie, “Phantom of the Paradise” a cult classic and a favorite of mine from the 70’s.

Refracted Memories closes the show with “Visions of Nineveh” taken from their 2015 album “Stepping Stones”. Refracted Memories is a collaboration between Welsh producer Michael Wadlow, American producer Jack Morefield, and singer songwriter Jay Arana. Their song “Visions of Nineveh” rolls into consciousness like a prophetic thought draped in fog from a forgotten time to round out a set of music that is progressive rock in every way.

And now, A set of mystique that has us in a time machine under fragmented skies where we see the dawn and “Visions of Nineveh”, on the Minstral Show. See you next week everyone.