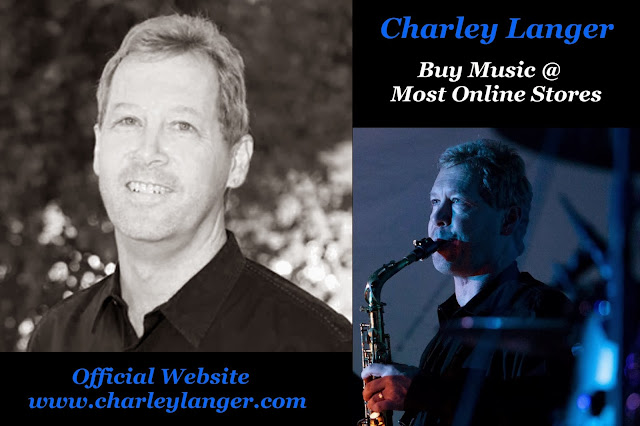 
Charley Langer sometimes refers to his debut full length independent recording Never The Same as “an art project with some very hot players” – but there’s no doubt about the Northern California based saxophonist’s mainstream potential and ability to connect with thousands of contemporary jazz fans in his home region and around the U.S. and world. Even before the album’s official release, its infectious and grooving title track received significant airplay on The Weather Channel and Smooth Jazz.com, and the video Langer made of the song gets about 400 views per day and has had over 115,000 lifetime views on YouTube. Fans can also create a “Charley Langer” station on Pandora – a rarity for a still emerging indie artist.


While he played saxophone in Southern California for a few years after receiving his Master’s in Performance from USC, the classically trained Langer had been away from music for a few years when Jon Basebase, a renowned musician that he befriended while living in Honolulu, suggested he begin playing and writing again. Langer had moved to Hawaii, where he worked as an environmental specialist, but found ample opportunities to play with Basebase and other entertainers, including the Bobby King Royal Combo and Willie Barton Orchestra.

This unique lineup helped Langer realize a vision that incorporates everything from smooth contemporary jazz to rock/fusion, old school soul/jazz, Latin and straight ahead/swing. The result is best described as intelligent smooth jazz – think Phil Woods meets Boney James. “I have varied interests and I love smooth jazz, fusion, classical, Hawaiian, reggae…and I grew up listening to swing and big band via my dad,” says Langer, who has also performed hundreds of gigs over the past eight years as part of the award winning Steely Dan tribute band, Steelin’ Dan.

“So naturally,” he says, “the music on Never The Same reflects a lot of these interests. Ron Wikso was great about making sure that it all hung together. The idea was to keep it very real with all live players and authentic instruments. If I wanted acoustic piano, Fender Rhodes or a Hammond B-3 organ, we used the real article. I wanted everything to sound organic and fresh, and I’m very excited that people are responding so positively to what they’re hearing.”

Langer’s live performances have included many different genres over the years reflecting the unique array of styles he plays on his alto and soprano saxes. Early in his musical career, he performed in Southern California with area orchestras, including the Pacific Symphony and the Santa Monica Symphony, as well as performing with other groups, such as a duo for the KCRW tribute concert to the late composer Halsey Stevens. In addition to the Hawaiian musicians he performed with during his time on Oahu, Langer has played with Morton Gould, John Adams, Zita Carno and, more recently, contemporary Christian artists Annie Herring, Julie Meyer, Chris DuPre, Pablo Perez and Gregg Stone. His gigs with Steelin’ Dan include local clubs (Harlows in downtown Sacramento) festivals like the Sacramento Jazz Festival, casinos (Harrah’s in Reno) and numerous wineries and amphitheatres. He is currently booking dates to play his own music as part of a duo with guitarist Kurt Shiflet.

Never The Same lives up to its name in that each of its ten tracks has its own distinct vibe, personality and set of musical influences. Written to reflect a challenging time in his life, the easy funk title track finds Langer in a slight melancholy mood in the verses, feeling hopeful in the pre-chorus and hitting his stride, breaking through to the light on the exuberant chorus. The tropical, Latin-flavored “Epifania” introduces the listener to Langer’s wistful melodic soprano, his colorful horn texturing and Wally Minko’s lively acoustic piano. The similarly vibrant and percussive “Outside In” features a playful jazzy sax melody and Minko’s Fender Rhodes coolness over Matt Bissonette’s bubbling bass groove. Following the lighthearted and melodic “Refuge” is the edgy jazz/rock fusion ballad “Remember When”—the first song Langer composed for the album. It begins as a moody sax driven ballad, then evolves in emotional intensity and a touch of gritty blues with Griffey’s blistering electric guitar intensity. Minko’s Hammond B-3 adds an old school bluesy jazz flavor to the bouncy mid tempo funk of “City Lights”, which features Langer at his alto strutting best.

Though the seductive reflection of “Gray Skies” has a gentle melancholy feeling, Langer actually wrote it on a very hot Sacramento afternoon when he was dreaming of a cooler, cloudy day. He calls the album’s spirited; straight ahead jazz/swing excursion “Upside Down” because it was inspired by one of his favorite Charlie Parker tunes, “Confirmation”. To create the classic big band vibe, Langer says he flipped Parker’s song upside down, so his song is rhythmically similar to the original tune but the melody moves in a completely opposite direction. Never The Same wraps with the in-the-pocket, soaring “Once In A Lifetime” (which features colorful horn textures and brass flourishes) and the dark, haunting “Expressivo”, an ambient piece which includes a tender call and response pattern between Langer’s emotional soprano and Mark Morris’ acoustic guitar.

Langer grew up in Boulder, Colorado, the son of a geophysicist who was also a jazz and big band aficionado. His father tried to steer him towards engineering, but music was Langer’s first love and he began taking lessons from his junior high band teacher, Vincent Gnojek, who worked with several prominent classical groups. He developed his technique under such masters of the saxophone as Gnojek, Douglas Masek and Laura Hunter.

While Langer found numerous opportunities to work as a musician after finishing grad school, he became discouraged at one point and “took the straight route” – first working in fundraising for the radio station KUSC and later following (sort of) in his dad’s scientific footsteps as an environmental specialist, supervising the cleanups of hazardous waste sites. This career gave him the foundation to pursue his musical dreams in many unique ways, from his years of playing with Steelin’ Dan to recording and releasing his debut CD.

“It’s amusing that Langer affectionately refers to Never The Same as his little art project, because normally that phrase means something a musician does for himself (and maybe a few friends) that has minimal mainstream commercial appeal. He takes an artistic approach to contemporary jazz for sure, mixing in a lot of dynamic old school soul-jazz textures (Fender Rhodes and Hammond B-3) and touching on various related styles, from Latin and edgy rock fusion to (on the album’s coolest, most unexpected excursion, “Upside Down”), straight ahead jazz. But avant-garde this isn’t. In fact, it’s one of the most infectious and engaging, instantly likeable in the pocket independent artist releases this year. It’s funky, it swings, it’s playful, it’s emotional – that’s a lot of places for a musical heart to go on one collection, but Langer does it all naturally and organically, supplementing his sharp array of sax sounds with real instruments and a lot of live band interaction. The title track everyone is hearing on The Weather Channel and YouTube is great, but just scratches the surface of Langer’s many musical muses. Let’s hope he does another “little art project” soon. All contemporary jazz albums should be this exciting. –Jonathan Widran

“Saxophonist Charley Langer, who’s studied under jazz masters and performed with numerous artists on stage, brings his musical chops to the forefront in Never the Same, his debut CD. It’s smooth jazz with bite, beefed up with contributions from world-class musicians. The title track is a smooth jazz and YouTube hit, a free-flowing track with a memorable chorus and angular solos from Langer and electric guitarist Kurt Griffey. Langer is lively on “Epifania”, combining his soprano and alto sax attack with brassy trumpet and trombone from Tom Marino. Langer can jazz it up, as he does with “Giant Steps”-like runs on “Outside In” and “Upside Down”, a swinging straight ahead number. Blues influences seep into “Remember When”, and a dreamy Rhodes interlude from Wally Minko spices up the ballad “Refuge”. Sax, Hammond B3 and guitar lead the attack on the energetic “City Lights”, which leads to the after-party slow-burner “Gray Skies” and Langer’s long sax lines.” – Brian Soergel, JazzTimes