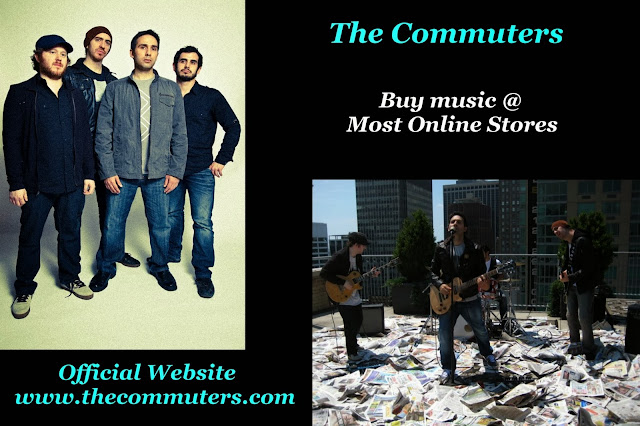 
The Commuters might hail from New York, but their kinetic, personally revealing anthems capture an alt-rock essence that aspires toward worldwide appeal. Their commercial debut (As I Make My Way – EP) was released at the end of August, and is comprised of 4 songs — “As I Make My Way,” “Bombs Away,” “Fallen From Grace,” and “You’ll Stay Right Here” — all from their upcoming album, Rescue, due out in early 2012. Their video for “As I Make My Way” was added to mtvU’s rotation in early October and they have received extensive airplay at college radio stations throughout the US.


Right from the outset of both releases (mastered by White Stripes/Ryan Adams collaborator Fred Kevorkian), The Commuters’ signature attributes are front and center. Lead single, “As I Make My Way,” has it all: an unforgettable hook, huge guitars that ring and echo and a grounded rhythm section that anchors the track’s precise tension. Elsewhere, you can hear traces of Peter Gabriel’s work with Daniel Lanois nudge against the delicate bite of Automatic/Monster-era R.E.M. The latter is particularly evident in the title track’s feedback thrust and circa-Bends Radiohead gets channeled via the poised, melodic moodiness of album standout “Fallen from Grace.” And what ties all this together are the Commuters’ poignant lyrics, which eschew cryptic sermonizing, focusing instead on transparently human experiences and emotions.


Such richness and diversity on an inaugural release is no happenstance. As their name suggests, the Commuters have traveled through a lifetime of musical influences, but it’s their own personal global journeys that have guided the foursome to something universal but prevailingly intimate. Before forming the Commuters in 2010, Canadian-born, Philippines-raised frontman Zeeshan Zaidi (whose parents were born in Pakistan and India) spent many years in the music industry. His early accomplishments included producing and engineering Grammy-nominated artist Ryan Leslie’s first demo, and he subsequently worked in the marketing departments of major labels in New York helping to develop the careers of other versatile artists, including OutKast and Cee Lo Green. During this time, Zaidi was also honing his craft as a singer, songwriter and musician, performing around New York’s open mic circuit. When the time arrived to put his own abilities as a performer front and center, he immediately shared a dozen demos of his songs with childhood friend, New York-based producer and soon-to-be Commuters guitarist Uri Djemal, who was also raised in the Philippines (by parents of Israeli and American descent). The two got to work co-producing the album at Djemal’s Madpan Studios in Manhattan, where he had produced many well-known artists in New York’s indie-rock scene. Says Zaidi: “Uri’s studio was a few blocks from my apartment and he was telling me for years to come work on my songs there. One day — when I knew it was time — I just walked over and we started.”


Soon, they were joined by Djemal’s previous collaborator, French-raised Ben Zwerin on bass and Italian-American upstate New York native Paul Amorese behind the drums, solidifying the current lineup. Zwerin, the son of an American trombonist and rock critic based in Paris, had previously played and toured extensively with many renowned world and jazz musicians. Amorese had been playing professionally since the age of 14, performing in numerous bands throughout New York City and state. The material that would become Rescue had firmly connected with its improbable shepherds.


The band is signed to Zaidi’s New York-based label, Communal Records. Having established themselves at noted hometown venues in Manhattan and Brooklyn, including Arlene’s Grocery, Lit Lounge and Spike Hill, and received blog acclaim in the U.S. and abroad, the Commuters are eager to build their US presence and also extend their experiences outward to an international audience. As Zaidi explains, the already-dynamic tracks on Rescue “sound energetic and alive” on stage. “We love creating songs in the studio but performing them for live audiences is even more exciting,” he continues. “A lot of our online fans in different countries ask when we’re going to play in their hometowns – and we want to make it to all those places.”


And while every band aims to last, the Commuters’ unique combination of its members’ personal histories and creative backgrounds leading up to this moment foreshadows a longer and brighter future than most. “Our hope and our goal is to be around for as long as possible,” says Zaidi. “We want to build this over time — the first album is just the start.”