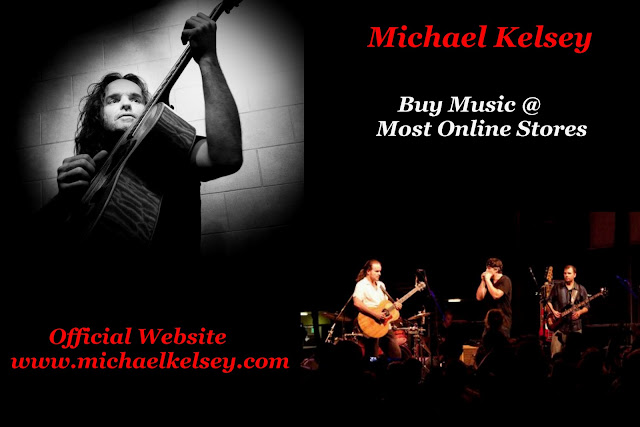 
MICHAEL KELSEY is a rhythmic, inspired guitarist and performance artist who blends many musical genres with fervour and grace. When he hits the stage to perform, he plays every inch of his guitar pulling out every part of it or anything else an arm's length or foot kick away. Through out a performance Michael may make use of technolgy, his improve skills, objects in the room, and audience interaction to make music for the ears but more importantly a musical experience for the senses.

Born and raised in Lafayette, Indiana, he began his musical journey weaving in and out of successful area bands as lead guitarist or bassist. Later he opened and ran a thriving recording studio, which after five years he retired in order to enable him to embark freely on his career as a solo artist.

His naturally soulful vocal illuminates carefully chosen lyrics that make his songs shimmer and shine. He plays expressively and manipulates the guitar to create a melodic fusion of alternate tunings and unorthodox hand positions allowing for him to achieve a full sound. The true beauty is in the way the song, the sound and the motion of his music unites. The songs, especially the lush instrumentals, can be reminiscent of the late, great Michael Hedges, but boast Kelsey’s personal percussive stamp, exceptional arrangement and deliberate instrumentation.

His live performances are particularly moving. Sometimes he sounds as if he’s deftly playing more than one guitar. At a Kelsey show audience members may actually lose themselves in the moment and forget they are listening to one person. They can be tapping their foot one minute, in a deep trance the next, then bursting into laughter.

"There is a five piece band in my head. They all have different tastes in music and they are all trying to escape at the same time through my hands, feet and mouth. I hang onto an acoustic guitar and see what happens," Kelsey sums up his stage show aptly. He is well versed in the art of entertaining and at every show he creates a rare army of sound that comes from one man, a voice and an acoustic guitar.

Whether he’s creating a song spontaneously for a lucky lady in the front row, telling a story complete with sound effects, or letting an inspired moment move his fingers around the fret board, Kelsey never performs the same show twice.

Kelsey’s abilities have enabled him to be noticed by many. A finalist in Guitar Player Magazine's national competition and winner of Guitar Center’s "Guitarmageddon," chosen as best unsigned guitarist out of over 3000 entrants nationwide says it all. This allowed him to be apart of Eric Clapton’s Crossroads 2004 performance where he shared the stage with many of the guitar legends such as Santana, Steve Vai, Eric Clapton. He has toured nationally with Blind Melon and Dishwalla and has opened shows for many artist of many styles including The Doobie Brothers, 38 Special, Rodrigo and Gabriella and the California Guitar Trio.
Bullet – Michael Kelsey

“Michael uses an arsenal of electronics, his Taylor 615,
and his voice to create layers of sonic adventures
that challenge the limits of acoustic guitar music.”
-Taylor Guitars

“A fearless experimenter, Kelsey is an acoustic guitarist
who weaves a multitude of unusual sounds and rhythms into
his patchwork quilt of work. Part performance artist and part
virtuoso musician. Kelsey takes the widest possible variety
of music and makes it his own.”
-Nuvo Magazine,Indianapolis, IN

“After sets by Neal Schon and Steve Vai Michael Kelsey takes the stage.
His combination of percussive, Michael Hedges-like playing and
Junior Brown-style de-and re-tuning shows that he is indeed a viable
"Guitarzilla."
-MATT WEITZ - The Dallas Morning News

A crowd estimated at over 15,000 listened intensely as Indianapolis, Indiana’s Michael Kelsey played the winning performance on his Taylor 615 acoustic guitar. Kelsey received a thunderous standing ovation, despite the 91-degree temperature.
-Mix Magazine

“To call the structure in his hands a guitar completely misses the point.”
-Fred Kraus, The Dayton Daily

"People are going to see more of him, this man is going to have the opportunity to communicate.”
-Jeff "Skunk" Baxter, of Doobie Brothers and Steely Dan fame. 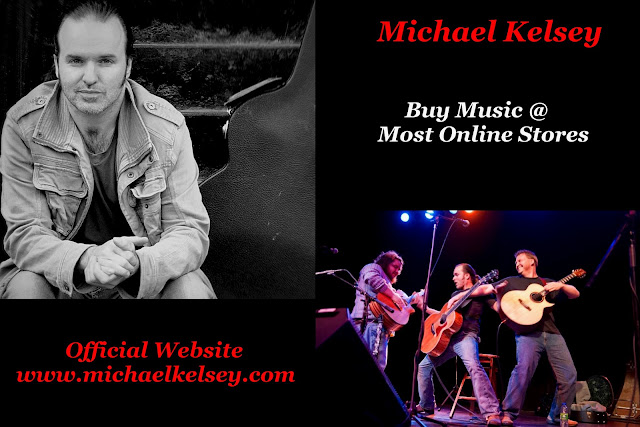