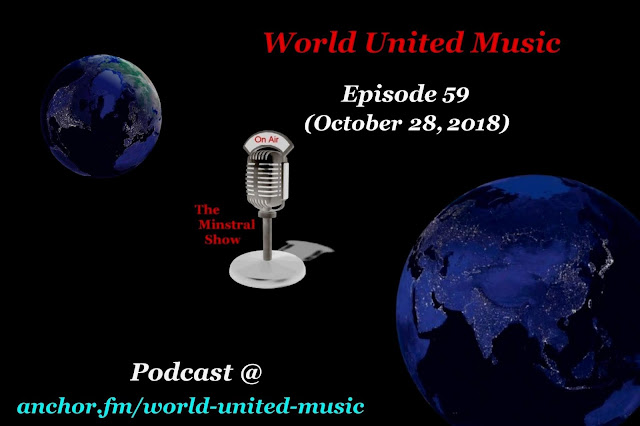 “The Perfects” start off the first set with “Come Down” taken from their 2011 album “Many Nights”. For those that love the New Wave sounds of the 80’s such as “The Cure”, and “The Fixx”, “The Perfects” will certainly resonate like a time machine visit to the past. Great song and music by Ric Peters.

From Brussels Belgium “Whispering Sons” follow with “Alone” taken from their Oct 2018 album “Image”. “Alone” is a new wave / dark wave tune that tackles “Alienation” in our insane world with sounds that also remind of the “Cure”. “Whispering Sons”.

Closing the set is Montreal Artist Chris Daigle otherwise known as “Black Bones” with “Gateway & Sakkara” taken from his 2018 EP “Harmonia”. This is exceptional ambient electronic music that reminds of the emotional soundscapes of Tangerine Dream…very reflective music with an ambience of mystery.

And so, as you “Come Down” you are “Alone” with a message “Here’s to a New Tomorrow” through the “Gateway” of “Sakkara” a set of music found only on the Minstral Show.

From Athens Greece, “The Steams” start the second set with “Black Sand” taken from their March 2018 album “Wild Ferment”

“Black Sand” is a dark progressive rock tune with hypnotic sounds that tell a story from the other side of consciousness.  Great inspirational music for artists in the creative zone. “The Steams”

Dave Kerzner from Miami Florida follows with 2 songs, “Reflection” and “Under Control” taken from his 2015 extended version of “New World” a brilliantly engineered album in music and lyric that became an instant favourite of mine the moment I heard it. A must have album for all progressive rock fans.

Dave Kerzner is currently in the process of releasing his a new album called “Acceleration Theory” with his band “In Continuum”…from what I’ve seen and heard so far, it is going to be another exceptional album. Awesome music “In Continuum” from Dave Kerzner…looking forward to it.

And so, from the “Black Sand” comes “Reflection” that we are “Under Control” but take heart in the fact that “Empires Never Last” creatively passionate and truthful music, only the Minstral Show.

Yuki Murata from Tokyo Japan starts off the final set on today’s showcase with “Bird Sings a Lullaby” a single from her fourth coming album “Piano Fantasia” to be released on November 1st, 2018 on Tokyo based Ricco Label.

Yuki Murata’s gift, is like musical poetry for the ears, her music leaves a lasting impression in all its solitary reflection of life. I really enjoy the ambience and the place the song takes me and so I’m very happy to share this wonderful piano piece with you today.

“Blanket Song” is just that, a blanket of good feelings through a soft psych acoustic delivery with harmonies and hooks to keep you coming back. I love this group for its diversity in rock, Psychedelic rock and Progressive rock. Truly fine music by a wonderful group of artists.

Chris de Burgh closes today’s showcase with “Mirror of the Soul” taken from his 2006 album “The Storyteller”. Here’s another wonderful classic song by, Chris de Burgh; a song and story that brings to light, the age-old battle between good and evil and the places you least expect it to find it. A Beautifully crafted song, in both music and lyric…it’s safe to say that Chris de Burgh is truly the Story Teller of our time.

And so, when a “Bird Sings a Lullaby” it becomes a Blanket Song and Mirror of the Soul, on the Minstral Show. See you next week everybody.

Posted by Stewart at 4:33 PM No comments: 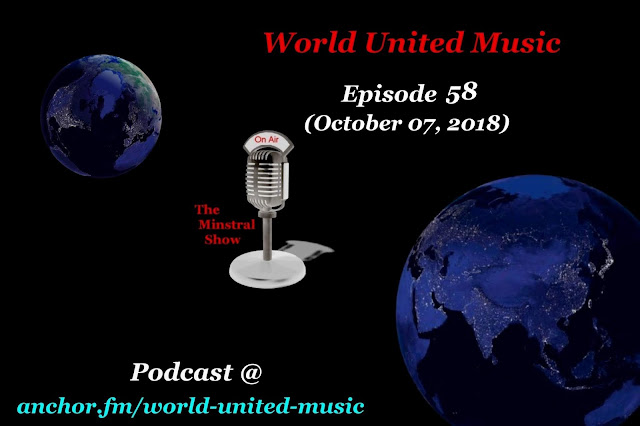 Welcome to Episode 58 of the Minstral Show!

Starting off today’s show is Belfast Northern Ireland’s “Sea Pinks” with “I Don’t Feel Like Giving In” taken from their January 2016 album “Soft Days”.

A great album by the way that evolves in the progression of 80’s New Wave Pop with a few surprises. Band Members: Neil Brogan, Davey Agnew and Steven Henry, deliver attitude on Soft Days.

Following The people is Australia’s “Southbound Snake Charmers” with “Moonshine Runners Blues” taken from their January 2016 - 5 song EP “Voodoo Chicken Shack”. Here’s an Infectious rockin’ Blues tune with attitude, packed with high energy that’ll certainly get your day moving. Lot’s of great music by this band on Bandcamp. So, go…check them out.

Closing the set is Birmingham Alabama Band “La Resistance” with “Head On”, a Jesus and Mary Chain cover to keep the energy flowing.

The song was released in 2011 on an EP of cover songs called “The Candidate” which consisted of 5 songs that influenced the band from the 80’s New Wave / Brit Pop era.

And so, the Sea Pinks, The People, Southbound Snake Charmers and La Resistance serve up energy, attitude and drive on The Minstral Show.

From Nashville Tennessee, Matthew Perryman Jones starts off the second set with “Happy” taken from his latest album “The Waking Hours” released in October 2018.

Matthew creates an ambiance of reflective thought through soul searching lyric and comforting tones to strike a common chord with the listener. The song asks us to look within and analyse why, when we have everything we need, why can’t we be happy…a powerful song by a great artist….Matthew Perryman Jones.

Following Matthew is Chris Stoddard and Samantha Ritter who are Miss Mobil Home, a Dream pop/shoegaze duo from New York, NY with their song “Fine Machine” taken from their June 2016 album “Glimmer Down”.

I find Dream Pop to be very soothing with a mysterious ambiance which puts me into a comforting reflective mood, made even more so by the poetic lyrics of this song. Very enjoyable music.

From Oslo Norway, Wobbler follows with “Foxlight” taken from their October 2017 album “From Silence to Somewhere”.

“Foxlight” captures the journey of the human spirit in isolation through the body’s physical death and the spirits resurrection in consciousness to embrace moments of clarity when the burdens and lies of empire are all purged from the mind…this is truly a masterpiece that reminds me of some of the best Progressive Rock Bands of the Late 60’s and early 70’s such as “YES” “Gentle Giant” “Genesis”, “Jethro Tull” and others that defined those times. From Silence to Somewhere is truly a must have album for progressive rock fans.

And so, another great set of progressive and reflective music to sooth your mind and soul on The Minstral Show.


Starting off our final set is Sydney Australia’s “Fables” with “Sherekhan” a single from their forth coming album.

Sherekhan is a hypnotic song with a haunting edge that borders the twilight of dreams and nightmares...a very progressive track from an album I am waiting patiently for. Good stuff.

From Seattle Washington, Midday Veil follows with “Empire is No More” taken from their 2015 album “This Wilderness”. The beginning of this song reminds me of the music that plays on The Legend of Zelda – Twilight Princess when the shadow world appears…the song is truly enthralling especially in these surreal times of declining empires…it’s also worth noting that with the fall of empires, comes a sobering reality in the aftermath, when all the illusions fade away…a very captivating song to be sure.

James Yuill closes the set with “Kings Come of Noethinge” an unreleased song that didn’t make it onto his July 2017 album “A Change in State” but it is available in a six song package for a limited time for anyone who joins James mailing list. Personally, I think this song is brilliant which is why I’m sharing it with you here…hey, it’s also a good reason why one should sign up to an artists official website as I suggest at the end of every show.

And so, the dream is always the same in the twilight hours, a place where artists play and music is born and then put together here, on the Minstral Show…see you next week everybody.