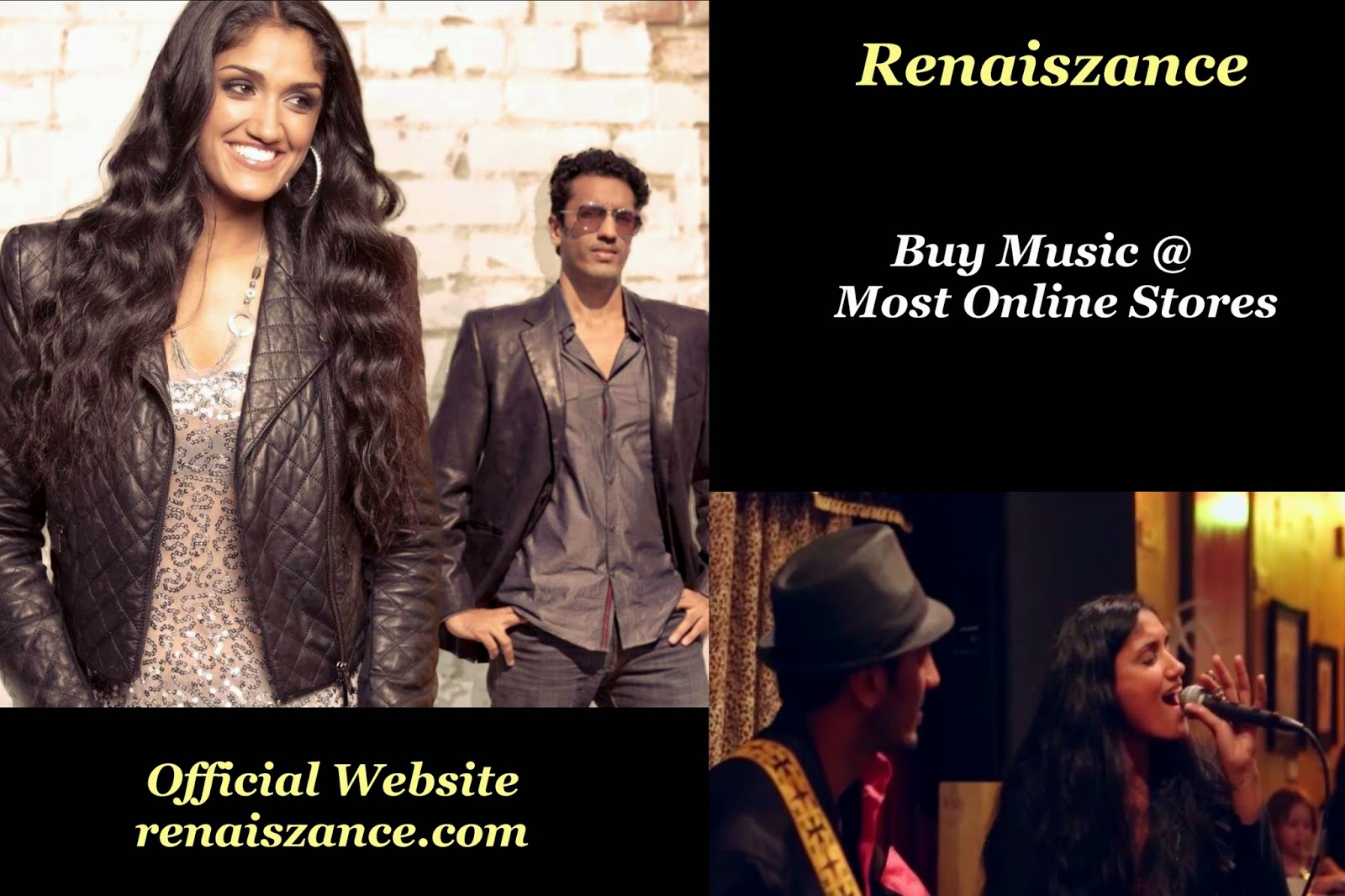 
“Study the science of art. Study the art of science. Develop your senses, especially learn how to see. Realize that everything connects to everything else.” -Leonardo Da Vinci


In this twelve song release, Ravé overlays Radha’s angelic wide-ranging vocals and melodies onto a rhythmic canvas of electronic dance and dubsteb.


“I Will Rise” is the first single from the RENAISZANCE debut album RISE and serves as the album’s theme song in honor of Nikola Tesla.


The album RISE is inspired by Ravé Mehta’s graphic novel THE INVENTOR, based on the true story of mystic inventor Nikola Tesla. Recognized as a top seller at its debut in San Diego’s Comic-Con 2012, THE INVENTOR illustrates how Nikola Tesla won the epic AC/DC battle against Thomas Edison during the late 19th century, regarding Tesla as the true Father of Modern Electricity. Although Tesla later died penniless, many of his inventions and ideas continue to live on and are still used in today’s technology, including in the creation of electronic music. In honor of Tesla, Ravé produced RISE as an electronic dance concept album that speaks to THE INVENTOR’s story of LOVE, HOPE and FREEDOM.


In addition to Tesla’s reemergence in the 21st century, “I Will Rise” also plays to the very emotions both Ravé and Radha have felt throughout their lives about never giving up and always believing in oneself, setting a tone of empowerment throughout the album. The songs featured on RISE purely have a life of their own scattered along the three dimensional continuum of love, hope, and freedom. This is where RISE takes the listener on a journey through the duo’s subconscious, skydiving from a childhood surrounded by naysayers only to land firmly on the ground as adults with the determination to charge ahead and eventually fly on their own.


The song “Friend In Me” is an anthem on friendship and unbreakable bonds, while on the other extreme the song “Fake New Real You” is an open letter pushing a loved one away to self-explore. The emotional roller coaster of love rises to its peak in “Can’t Let Go”, dealing in one’s inability to let a loved one go, and falls to its trough in “I Will Always Love You” about a heartfelt way of simply saying ‘we’re just not meant to be together’.


Hope is the theme that resonates most with the duo as evident in most of their songs. Having watched their immigrant parents from India pursue a life-long dream of a better life in the U.S., they explore chasing their own dreams in the songs “American Dream” and “Follow Your Heart”. The tracks “They Can’t Stop Me”, “Did You Ever Think”, and “My Way” spotlight overcoming negativity while pursuing their aspirations. “Touch the Sky” speaks to how unconditional love and freedom combined with responsibility empowers one to continually test and push their own boundaries.


Closing the album is the song “Grace and Glory”. Originally written as a tribute to NASA’s final space shuttle launch, the song celebrates how collectively we can achieve anything we put our hearts and minds to.

Posted by Stewart at 5:12 PM No comments: Links to this post 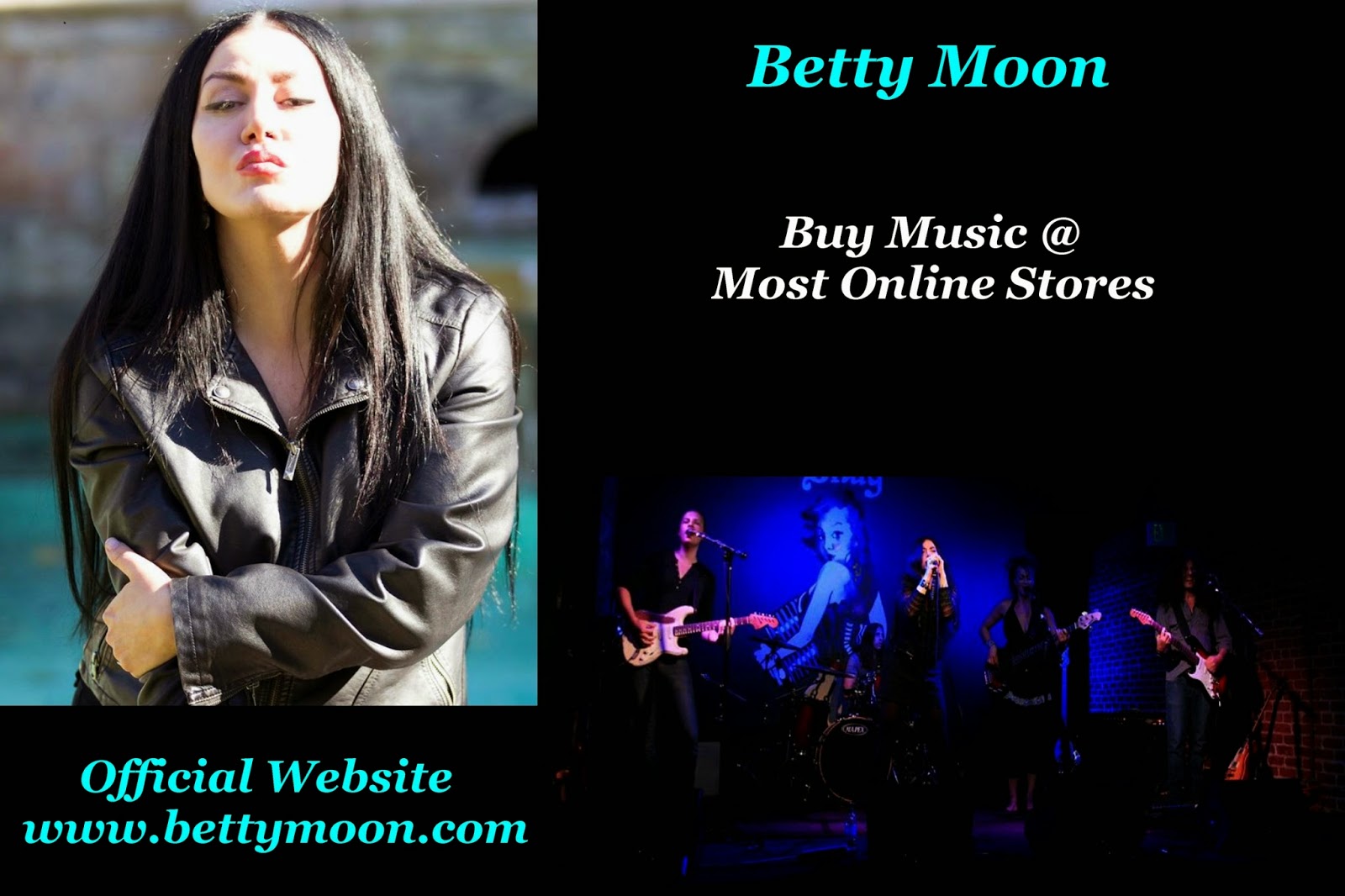 
Betty Moon is a Toronto-born singer, songwriter, producer, and filmmaker. She has recorded six albums, including the 2014 release "Amourphous", which Moon produced and which features the single, “Valentine,” mixed by Grammy Award-winner Chris Lord-Alge. Moon’s music has been featured in a variety of television shows and films including Californication, Dexter, Bounty Hunters, Walking the Dead directed by Melanie Ansley, and Last Gasp starring Robert Patrick.


In 2010, Moon relocated to Los Angeles and released “Rollin’ Revolution,” which garnered airplay on famed L.A. rock radio station KROQ. In 2013, Moon was a featured artist at the Sunset Strip Music Festival, sharing the stage with Marilyn Manson, Quiet Riot, Black Label Society, and The Offspring. She continues to be a regular performer at iconic venues such as The Roxy, Whisky a Go Go, and The Viper Room in Hollywood, California. Her collaboration with top music industry professionals includes Kenny Aronoff, Randy Cooke, Wes Scantlin, John Christ, Jason Sutter, Glenn Milchem, Gavin Brown and Chris Lord-Alge.

Posted by Stewart at 11:33 AM No comments: Links to this post 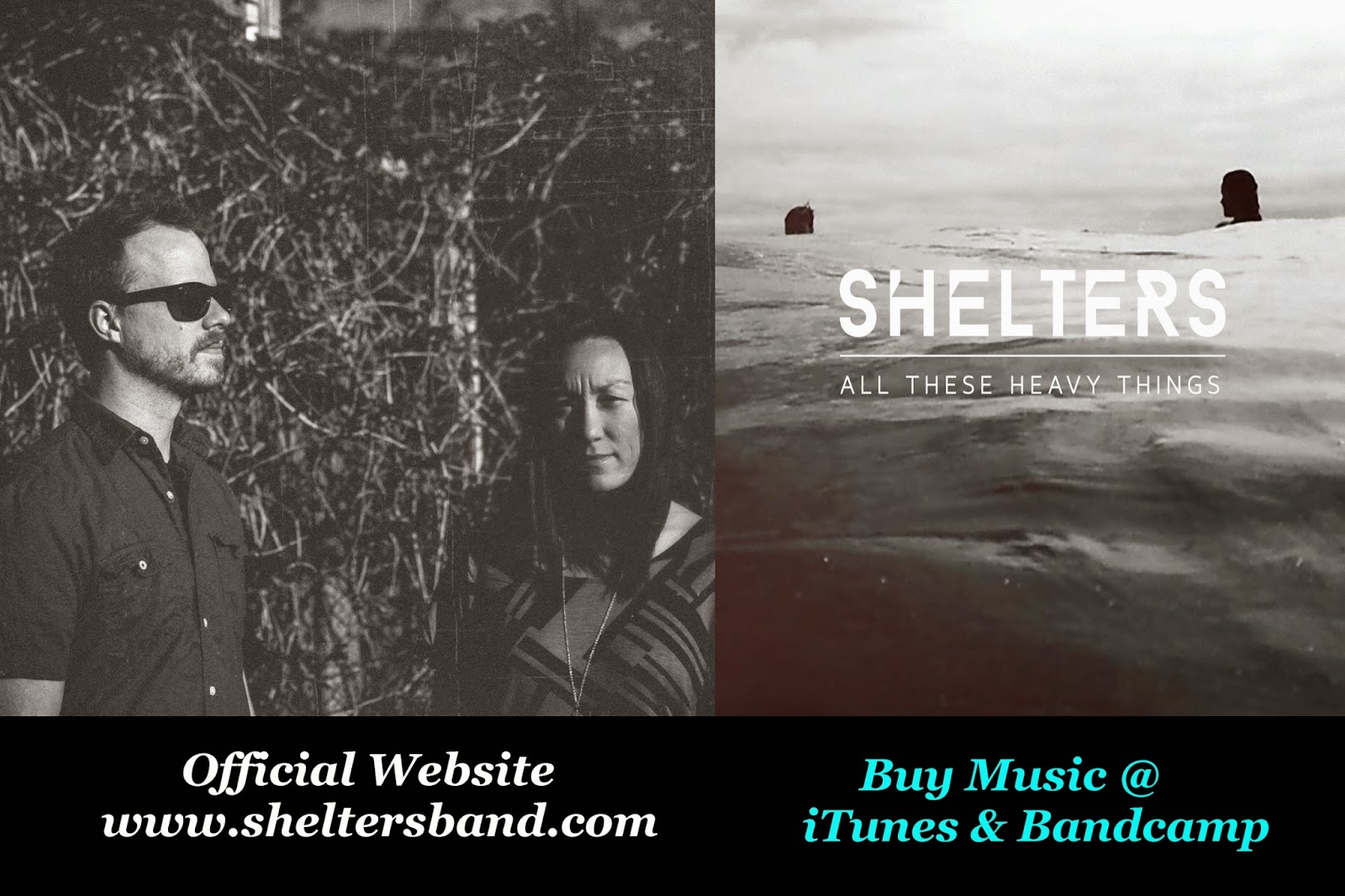 
Shelters is one part Marshall Usinger, one part Shelly Rollison, and a lot of friends along the way.  The duo met almost five years ago at a house party, but it's only been in the past few years they've started writing together.


Although they exchanged many potential song ideas and developed a few of them, it wasn't until the end of 2013 that a handful of the songs started to find their way.  The result was their debut EP, “All These Heavy Things”, released on iTunes June 17th.


The debut EP of Shelters combines Marshall's rock/punk roots with Shelly's folk/acoustic stylings.  The band hopes to keep developing their sound and are already writing songs for their next album.  If good things come to those who wait, then this is just the start of many good things.

Posted by Stewart at 1:56 PM No comments: Links to this post 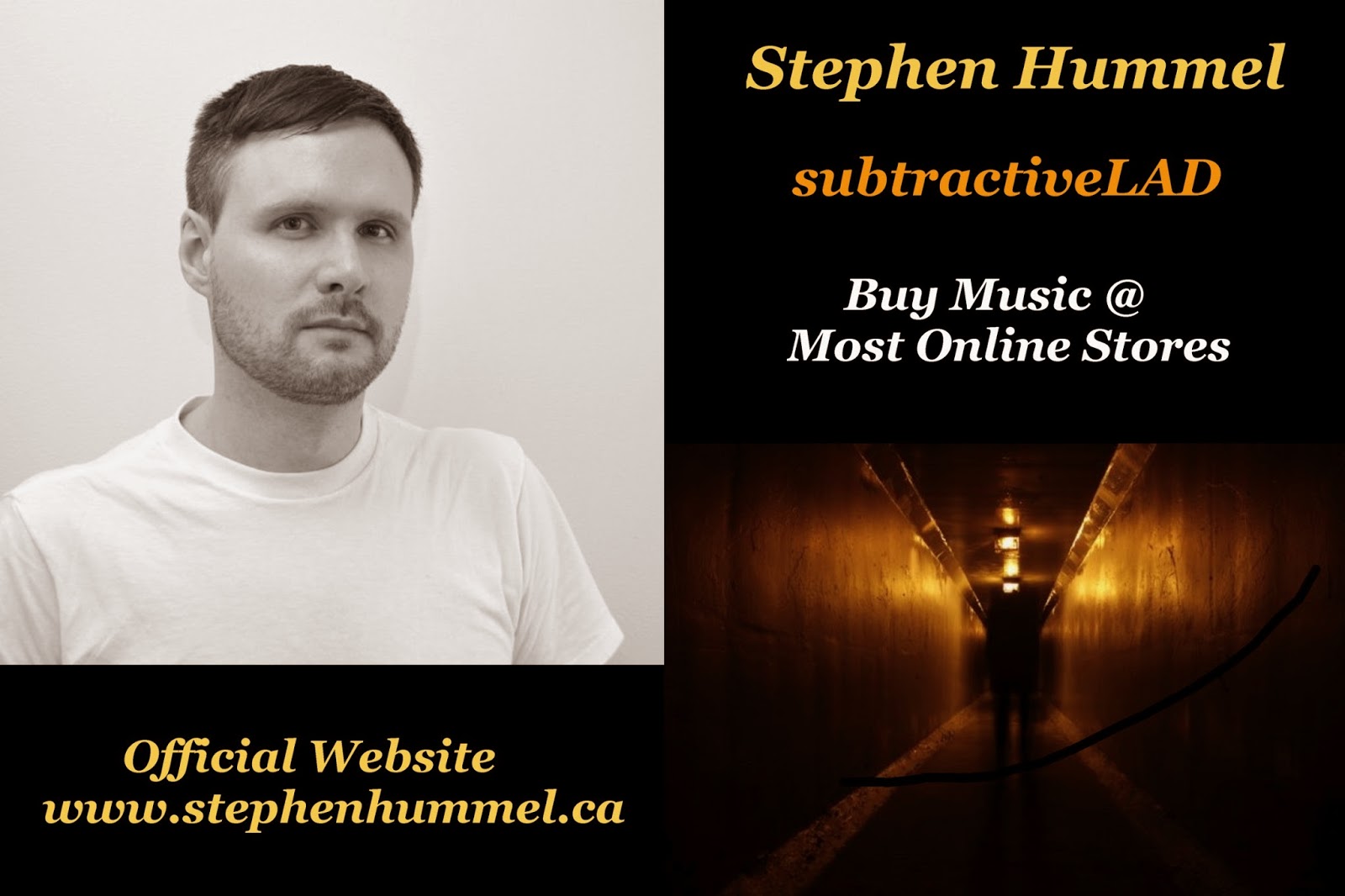 
Stephen Hummel has evolved into an artist that consistently defies expectations. By creating music that ignores genre labels and focuses on emotional weight, Hummel has managed to avoid the pitfalls of trendiness and style-over-substance. Whether producing epic instrumental statements as subtractiveLAD, or (more recently) forging a new path as a singer/songwriter under his own name, Hummel creates music that reaches deep into the listener's psyche. Embraced by independent radio and the blogosphere, Hummel's music has managed to reach a global audience of adventurous listeners, interested in the next chapter that will be added to an already extensive catalogue.


With classical training as both an instrumentalist and vocalist, Hummel began his musical career in the world of improvisational performance, developing a reputation for never performing the same show twice. After a late-90s residency at the now defunct DV8, in downtown Vancouver, Hummel decided to largely abandon live performance while developing his skills as a producer/recording artist. In the early- 2000s, Hummel also began developing software synthesizers for the German audio company, CreamWare, under the mentorship of synth-legend/guru, John Bowen. The subtractiveLAD project was born out of late-night experiments in Hummel's ever growing studio of custom software creations and hardware investments.


After releasing seven diverse and critically acclaimed subtractiveLAD albums for n5MD, Hummel has struck out on his own, pushing the subtractiveLAD sound into new territory, while exploring song-writing and singing, without a moniker. Adding to his creative arsenal, Hummel has reached back to his formal training in the visual arts and introduced photographic, graphic design and video elements to compliment his musical output. By being able to control all aspects of his creative output, Hummel has made his music an increasingly personal and intimate experience for his listeners. With a steady stream of work and an approach that looks to always push his own boundaries, Hummel will continue to keep listeners guessing what direction he will explore next

Posted by Stewart at 4:16 AM No comments: Links to this post 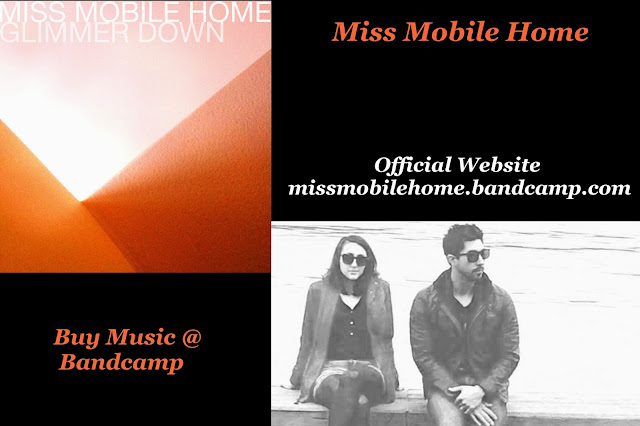 
Ghost Pop, Shoegaze duo from New York. Chris Stoddard (songwriter/guitars)and Samantha Ritter (vocals/keyboards) formed in early 2014 to record their debut EP, Phototaxis. Look for them to promote the album with shows in the autumn of 2014.

Chris Stoddard and Samantha Ritter continue to impress with their second release “Glimmer Down”. The 7 song album continues the Dream Pop journey with a shoegaze / progressive blend of vocals and sound which captures the imagination from the very first song on the album “Fine Machine”.

“Glimmer Down” allows the listener to take a moment out of a hectic day and enter a peaceful realm of atmospheric dream like music…an escape into consciousness where the mind is at peace and contentment. 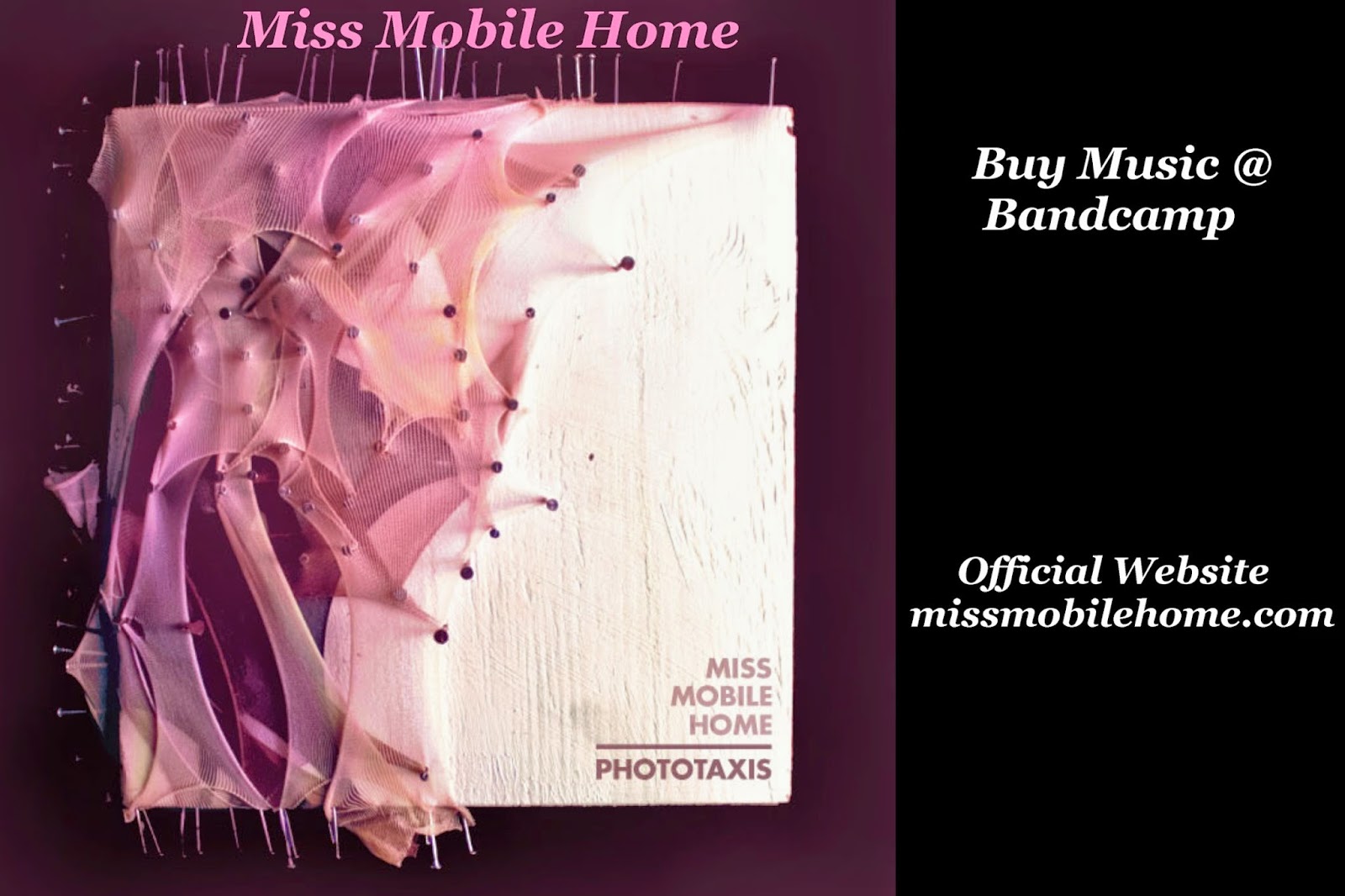 Posted by Stewart at 2:01 PM No comments: Links to this post 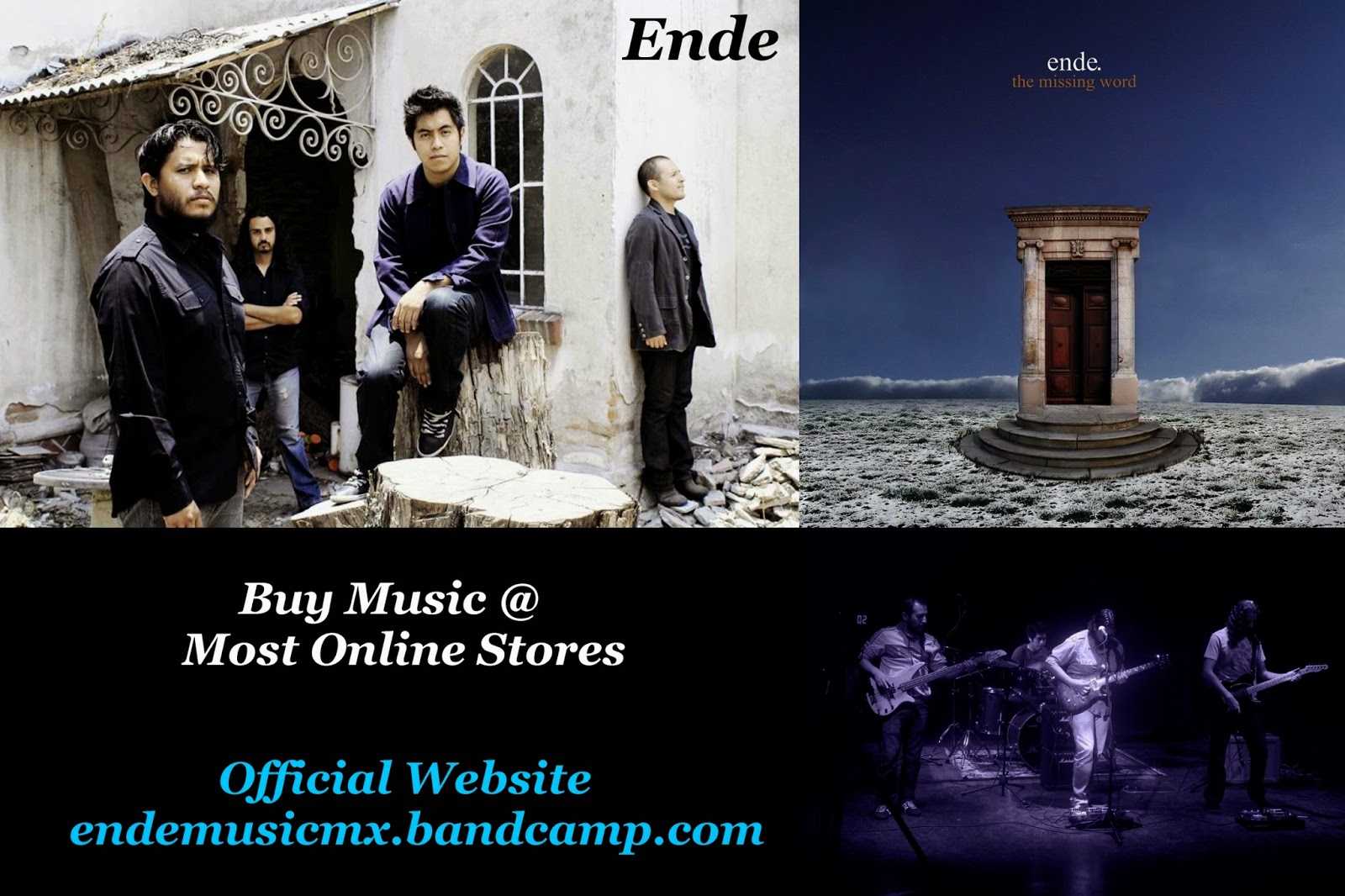 
Ende are a Progressive Rock / Alternative Rock Band from Puebla Mexico founded in 2011 that creates music for a thinking audience using lyrics inspired by diverse literature. They just released their first EP “The Missing Word” in June 2014 that can be purchased at most online stores.

Posted by Stewart at 9:54 PM No comments: Links to this post 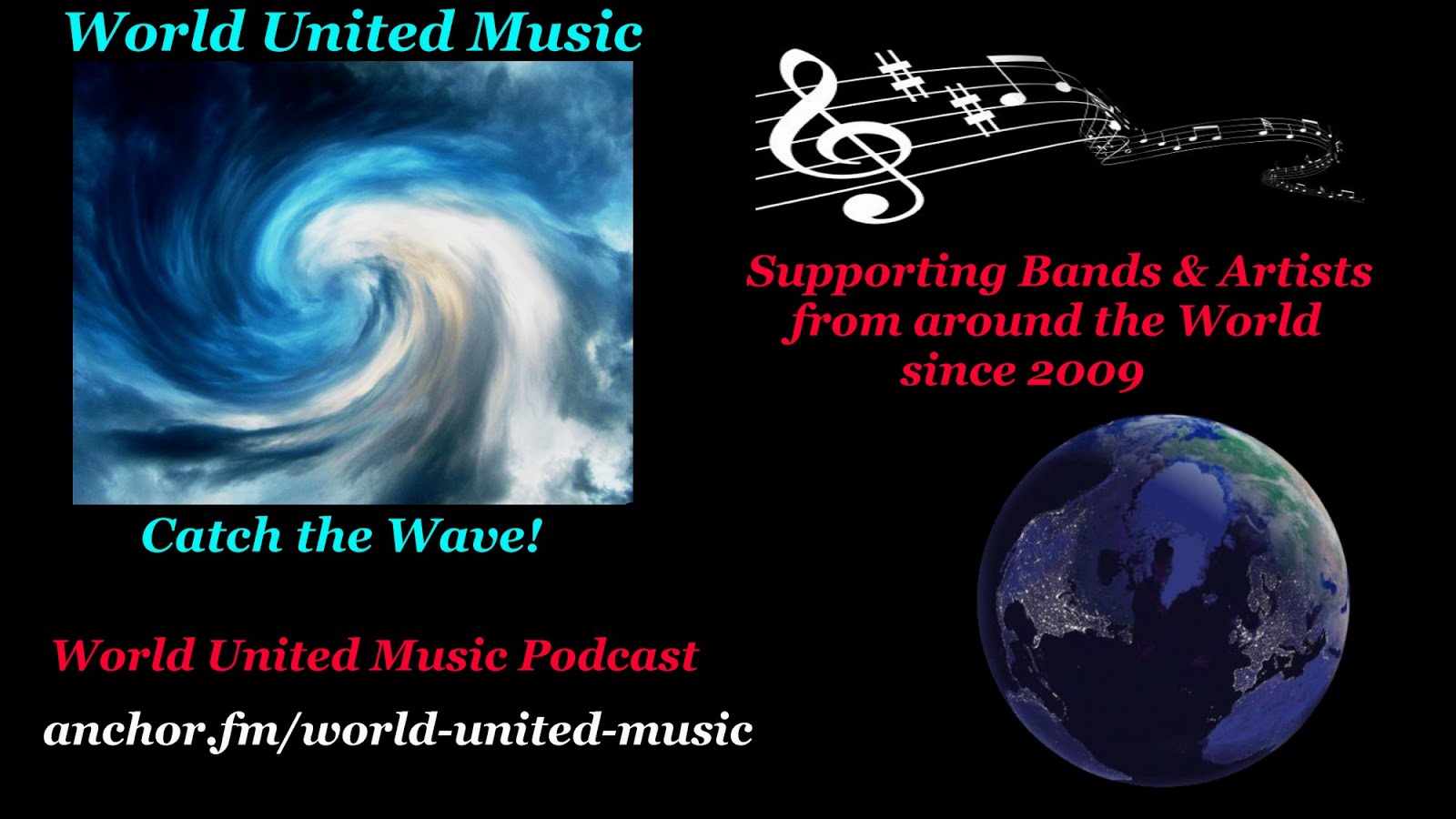