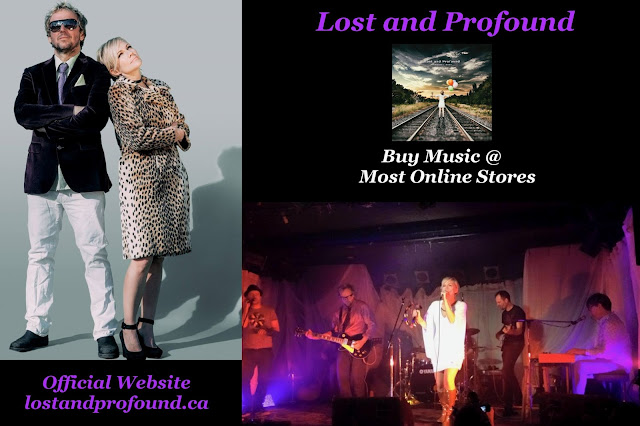 About: Lost and Profound

Lost and Profound are back, and for that we can be grateful. It has been more than a decade since we have heard from the acclaimed Toronto-based duo of vocalist Lisa Boudreau and songwriter/guitarist Terry Tompkins, but new album Goodbye Mine confirms they remain at the height of their considerable creative powers.

Their previous release, Red Suede Red came out in 2002, after which Terry and Lisa turned their individual talents to their other successful musical activities (Tompkins as a composer and producer for film and TV, Boudreau as an in-demand voice actor and singer).

The itch to record together again returned, sparked in part by the fun Terry had making a new album with The Now Feeling, the Calgary-based psych band . "That went so well, I thought we should make another Lost and Profound record," he explains. "I had all these tunes that I started playing for Lisa, and before we knew it, we were working on a record.'"

The essential core of the Lost and Profound style is the combination of Terry's evocative songs and soundscapes and Lisa's pure and emotionally eloquent vocals. The potency of that musical marriage has not been diminished one iota, as Goodbye Mine triumphantly demonstrates. "We had a clear vision of the sound we wanted for the record," Tompkins recalls. "We wanted a production sound like that on all those early '70s albums we love, and we kept it simple and sparse.

Tompkins and Boudreau co-produced Goodbye Mine, with recording taking place at elite Toronto studio Revolution Recording. Lisa explains that "before going into the studio, we booked a gig so we'd learn the songs and figure out what worked.

All the bed tracks were recorded within four days. "The band's so great that we did most of it live." says Boudreau. "I did all my lead vocals in two days, so it was very focused and concentrated. The engineer was Dean Wilson, who did Beck's Mutations, and he was lovely." Revolution's house engineer (and partner in the studio) Joe Dunphy also made a major contribution, earning Terry's praise as "a wizard with guitar sounds."

The results were then mixed at Prairie Sun Studios in California by acclaimed veteran engineer Oz Fritz and old friend of Terry and Lisa's, whose lengthy resume includes engineering and mixing Tom Waits' Grammy-winning Mule Variations and albums by artists as diverse as Primus, John Cale, Herbie Hancock, Bob Marley, Bill Laswell and Wanda Jackson. Assisting Fritz in the mixing process was Terry and Lisa's son Jody Tompkins, an up and coming audio engineer. "In the morning, we'd all listen to the songs and Terry and I would say 'this is what we want here,'" recalls Lisa. "Then we'd go away for awhile and take advantage of California's medical marijuana laws. Then we'd come back at the end of the day to do minor tweaks to what Oz and Jody had done... and then we'd all go for dinner.

The mixing and mastering for Goodbye Mine was done to tape, with a view to the vinyl pressing of the album. "This will be the first time we've done vinyl for a Lost and Profound album, and that is really exciting," says Terry. The warm and intimate sound of vinyl is indeed the perfect medium for the record. There is a pleasing sonic excellence to Goodbye Mine. The full-blooded backing vocals on Iodine" and "Bad Sister" impart a gospel vibe, while the beautifully affecting and folk-inflected "The Rover" has a Celtic feel enhanced by the masterful fiddle playing of Chris Bartos. "I wrote 'the Rover' when Lisa's aunt died," Terry recalls. "I wanted a song that talked about dying as a journey. One verse was recited at her aunt's funeral, and I later finished all the lyrics in one night."

Tompkins takes the vocal lead on the aptly-named "Jewel," an upbeat track with a California Sunshine pop vibe, while the lush "Superhuman" brings classic Fleetwood Mac to mind. Soaring guitars, evocative strings and backing vocals mesh with Lisa's passionate vocal performance on "Goodbye Mine," another highlight on an album devoid of lowlights.

Some 30 years of living and making music together has inevitably meant that Terry and Lisa have forged a beautifully idiosyncratic Lost and Profound sound, but they're not afraid to cite musical influences and inspirations. For the new album, Terry singles out Pink Floyd. "We referenced them over and over in the making of this record," he notes. "Darrell's slide guitar playing on 'Iodine' is very Floyd." The ability of Pink Floyd to create a huge sound in a sparse manner is certainly replicated on Goodbye Mine.

Other key inspirations include Leonard Cohen, Lee Hazelwood, Jimmy Webb and Townes Van Zandt. More contemporary sonic reference points would include Elliott Smith and such so-called 'slo-core' artists as Mazzy Star, Low and Red House Painters, while the haunting purity of Lisa's vocals has elicited comparisons to the likes of Mazzy Star's Hope Sandoval and Portishead's Beth Gibbons. "I do think the sweet spot for Lisa's voice is a melancholy lyric, and I do seem to primarily write relationship songs.", Tompkins explains.

The couple's creative process has remained relatively unchanged, as Lisa explains."Terry will demo his songs himself, on acoustic guitar and piano. He naturally has great phrasing, and I will take from that and add whatever I can do." Tompkins adds that "I'll have the demos on in the background around the house. If Lisa reacts to one, we'll work on it, If she doesn't react, then that song isn't going to work.

1989: The Bottled Romance of Nowhere
1990: The Psychedelic Folk Virgins