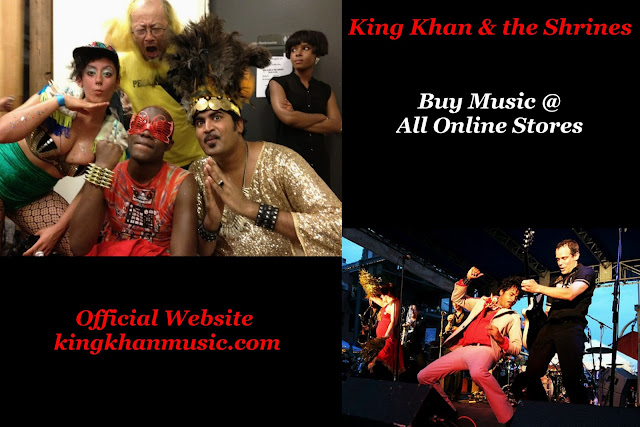 About: King Khan & the Shrines
Imagine Roky Erickson backed by the Sun Ra Arkestra or Wilson Pickett and The Velvet Underground, or picture the love child of Anubis and Kali. King Khan & The Shrines is more than a psychedelic soul band with a spectacle of a stage show. They are a cult musical phenomenon with more than 10 years of international touring, multiple studio records and a fan base of fervent punk, soul, free jazz and garage rock heads.

King Khan, the spiritual guru and front man, cobbled together a fierce line-up of musicians while in Berlin in between reading Tarot cards and raising a family. What he ended up with in 1999 is one of the most entertaining groups the world has seen and heard since the days of Ike & Tina. The line-up includes Chicago-born, Ron Streeter (veteran percussionist for Curtis Mayfield, Stevie Wonder), a horn section consisting of trumpeter Simon Wojan (member of Kranky Records recording artists Cloudland Canyon), tenor sax man Torben Wesche (Germany’s John Coltrane), and famous French rockabilly baritone saxophonist Frederic Brissaud. The rhythm section of the Sensational Shrines has been called a German/French version of the Freak Brothers – Till Timm on guitar, organist Frederic Bourdil, Jens Redemann on bass and drummer Mirko Wenzl.

Their first album Three Hairs & You’re Mine was produced by Liam Watson, recorded in the legendary Toe Rag Studios in London and released in 2002. A second full-length, Mr. Supernatural, followed in 2004. King Khan & The Shrines soon became an all-star international movement. Numerous gigs followed all across Europe with The Black Lips, Enon, Demolition Doll Rods, Mr. Quintron and Ms. Pussycat, an after-party for 50 Cent in Norway. They headlined Toronto’s NXNE festival 2006 playing three nights in a row and even had a member of the Sun Ra Arkestra join their brass section.

In 2007, King Khan made the soundtrack and film score for Schwarze Schafe, a major motion picture in Germany. The soundtrack included music from The Black Lips, The Spits, Gris Gris, Quintron and other greats. They also had a song placed in the movie Chiko, produced by Academy Award Winner Fatih Akin.

Their greatest hits, aptly titled The Supreme Genius of King Khan & The Shrines, came out in 2008 and for the first time their music was widely available in the U.S. The entire psychedelic-soul big band then graced stages for the first time in North America, leaving behind them a colorful spell of amazement and wonder.

They kicked off 2012 on a high note as they headlined the Bruise Cruise Festival and have just released “Bite My Tongue,” a sweat-drenched, ass shaking, groovy psyched out number, complete with rip roaring horn lines, southern fried guitar riffs and lysergic melodies. 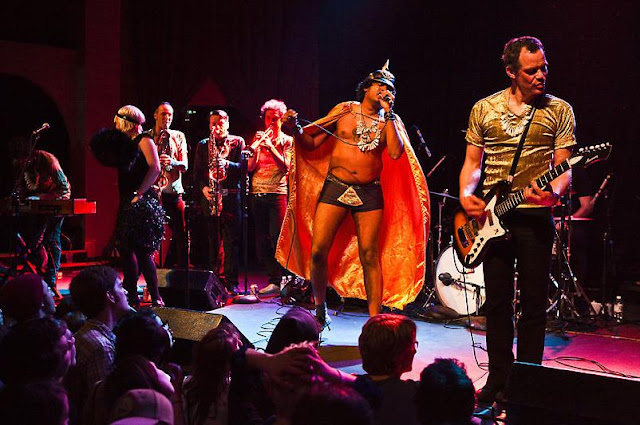