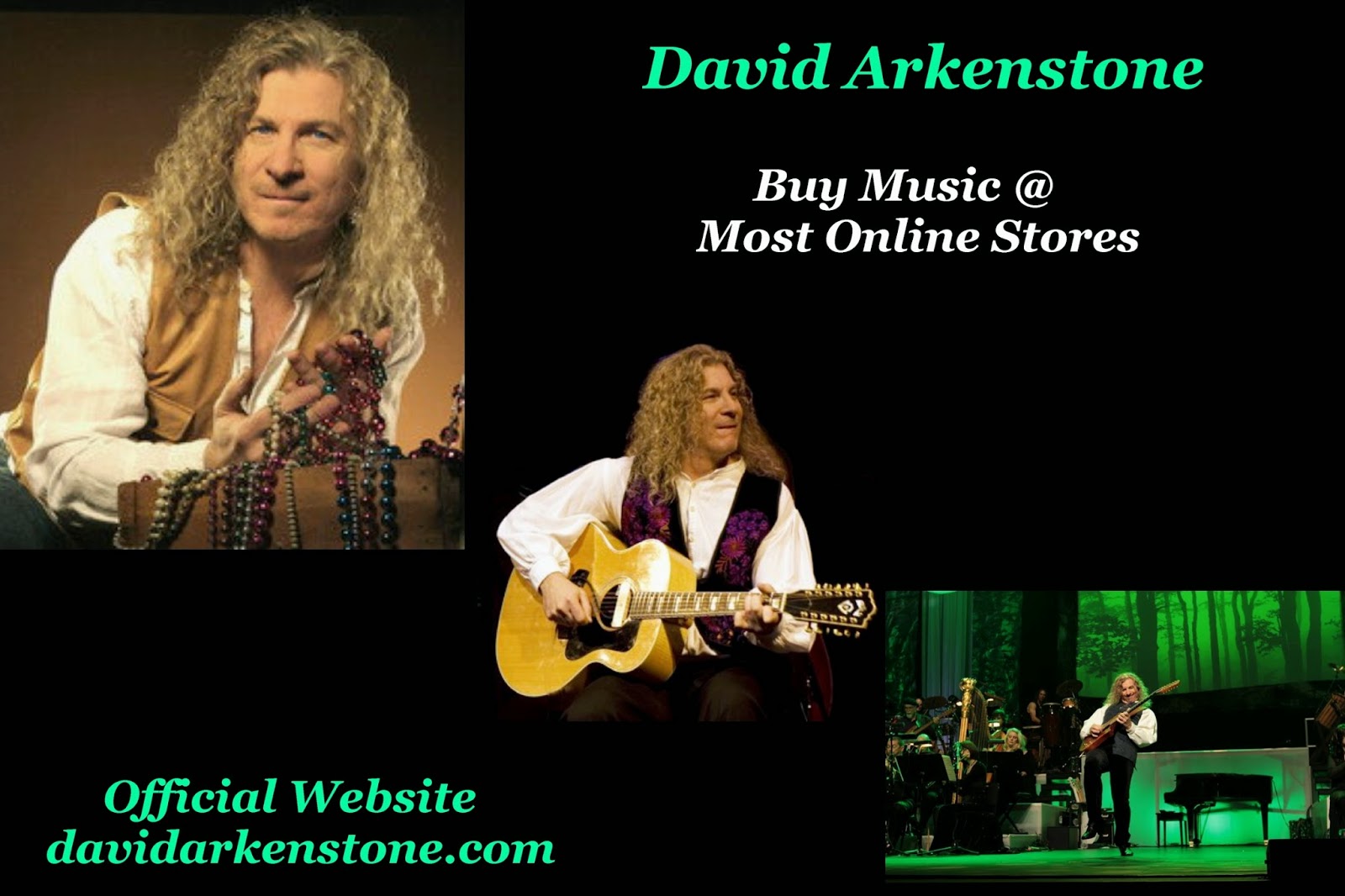 
With 3 Grammy nominations, 20 Billboard hits, and millions of fans worldwide, David Arkenstone has established himself as one of the best contemporary instrumental musicians of our time. Known for his Celtic inspired, world beat new age fusion, he continues to create distinctive tracks that set him apart from other composers.


This award-winning multi-instrumentalist has captivated audiences since he broke onto the music scene in 1987 with his debut album, Valley In The Clouds, described by one reviewer as “one of the most exquisite electronic recordings ever produced.” Thriller choreographer Michael Peters created a ballet to Valley In The Clouds in celebration of the Winnipeg Royal Ballet’s 50th Anniversary. David has earned two #1 albums - Citizen of Time (1990) and In the Wake of the Wind (1991). His much celebrated Celtic Book of Days (1998) remains one of his most popular recordings ever. Released in 2000, Caravan of Light was honored as Best Album of the Year by New Age Voice, and Sketches From an American Journey made Soundscan’s list of top ten New Age Albums in 2002. Acclaimed music critic Michael Debbage recently listed three of David’s albums – Sketches From an American Journey, Atlantis, and Myths & Legends - in his Top 30 Of The Decade.


Often compared to Mannheim Steamroller and The Chieftains, David has made over 30 recordings, has toured extensively including performances at New York’s Radio City Music Hall and the Hollywood Bowl, scored dozens of films and documentaries, and composed music for the Olympics that is used to this day. NBC Producer David Michaels, who makes frequent use of David’s music, says “David writes with fire, passion and emotion, all at once simple and complex. He’s an artist capable of constant inspiration.” Adding to his diversity, David has a worldwide following as one of Blizzard Entertainment’s World of Warcraft composers including the groundbreaking expansion, Cataclysm.


A musical storyteller, David is passionate about taking his listeners on a journey, creating sonic tapestries that evoke every emotion. Critics hail his music as “full of thunder and feeling, comprised of layers of acoustic and electronic instruments and voices, which send the listener on a joyous expedition.”


“A love for travel and adventure is just something that’s embedded in my personality,” says David. “Sometimes I get the feeling that I’m painting as much as I’m composing. I tend to envision a place where I would like to go, or an adventure I would like to take, and I let my imagination run free. I’ve gotten countless e-mail messages from listeners who love to take these journeys with me. I’m sometimes surprised by how powerfully people respond to my music.”


After coming to California from rural Chicago at age 10, David immersed himself in all the music he could find. Spending high school and college in various bands and performance groups, he then criss-crossed the country several times playing popular music. He finally settled down to concentrate on developing his own sound. David has always been inspired by the process of blending technology and music to create a multimedia fusion for producing amazing sounds. By working with state-of-the-art technology, he combines the highest quality electronic samples with acoustic instruments played by the finest musicians including David himself, often adding choral groups.


“Technology has produced some wonderful tools for making music. The computer allows me to fully orchestrate my pieces and really fine tune them. I have always loved the sound of the orchestra, and now I believe I have refined a wonderful blend combining the best elements of the acoustic world, with the electronic world," states David. While he is primarily a keyboardist, David plays the guitar, mandolin, flute, cello, percussion, and many other instruments. His impressive collection of instruments includes native flutes, drums from around the world, and harmonium.


David enjoys being out on the road and meeting his fans and is particularly fond of his Winter Solstice concerts during the holidays. "One of the most exciting things about performing live is the interaction I get with the audience,” says David. “It's very different than making a recording, where you're never sure who is listening to it. The communication is complete in live performance, plus it’s just plain fun to play these songs with my friends, and the audience senses that. A lot of the roots of our musicianship come into focus without the magic of studio editing – it's the moment, you play your best, and many times reach new heights, and then it's gone, and on to the next one."


His current project include an epic, neo-classical album – a collaboration with enchanting singer/composer Charlee Brooks – set for release in 2012. “Working with Charlee has given me the opportunity to reinvent myself as an artist yet again. We have created music that transcends what either of us would be able to accomplish on our own.” David’s score for the critically acclaimed PBS documentary Echoes of Creation is one of his most adventurous to date. Domo Records, known for its eclectic roster of world music artists, including Kitaro, recently released Ambient World to rave reviews, along with Myths and Legends, Sketches From An American Journey, Echoes of Light And Shadow, and Spirit of the Drum. Other recent releases include Celtic Chillout, Visions of Christmas, Christmas Lounge, and a 3-CD set tailored to the spa and relaxation market: Bliss, Touch and Reflections. Fans can catch David and the band in concert and at special appearances at Renaissance faires and, of course, the Winter Solstice tour.