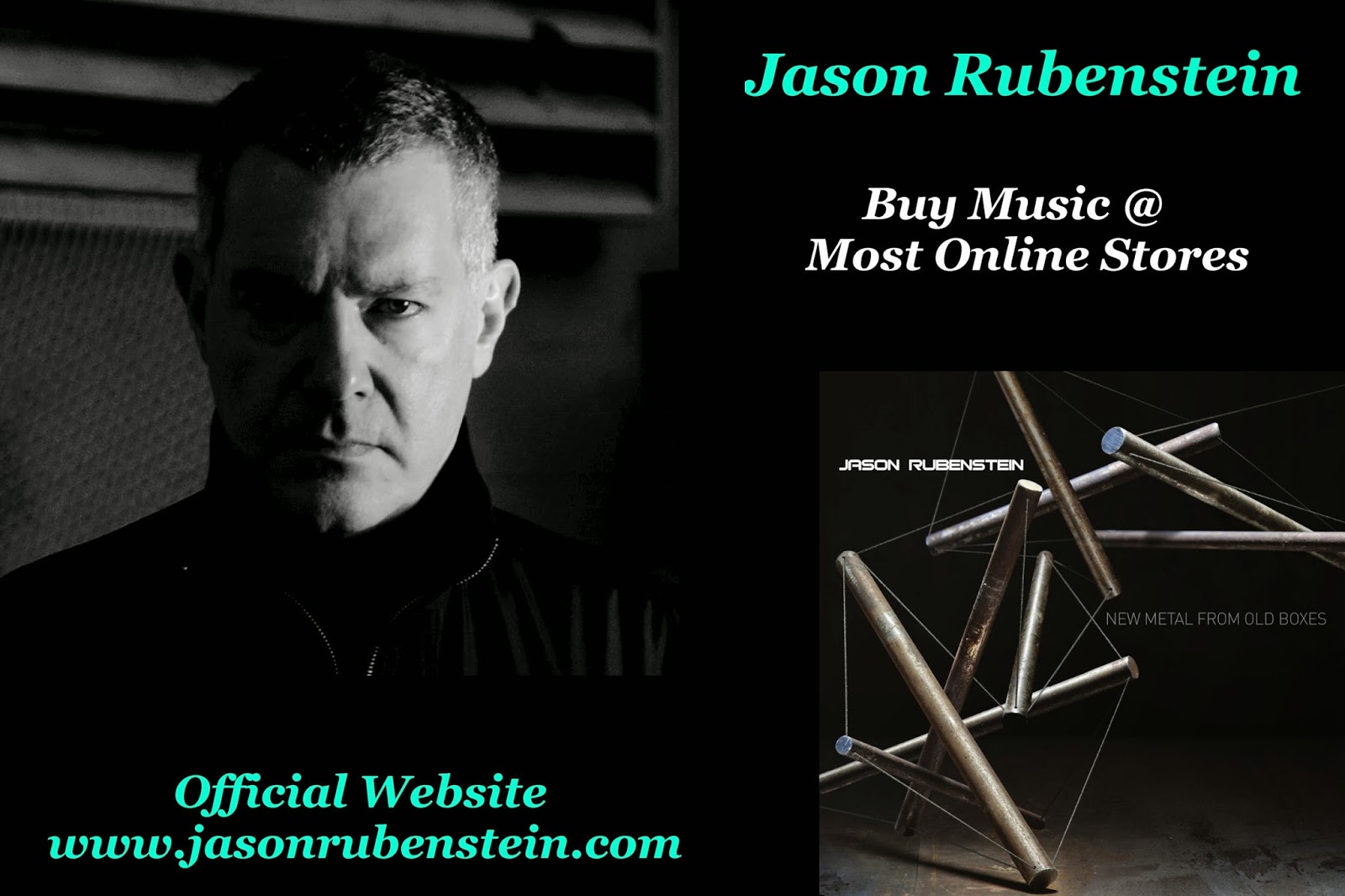 
Jason Rubenstein has been writing and producing music since 1995. His latest release, “New Metal From Old Boxes” is a return to his progressive-rock roots with a loud, heavy, energetic and modern suite of instrumentals that evoke King Crimson, ELP, NiN, and classical music.


Written, performed and produced by Jason, it is a change in style from his previous mixed-genre CDs. “I love progressive rock.”, Jason said, “I grew up on it, and I was in a prog-rock band in the 80s, back when prog really was not cool. Recently, I needed to hear new music that carries forward the heavier, 20th-century-classical progressive-rock sound. It was a challenge; nothing felt quite right to me. For “New Metal From Old Boxes”, I just wrote what I felt, and used a limited set of classic textures: piano, Hammond B3, huge drums, Oberheim and Moog synthesizers, and bass & guitar.”


Jason Rubenstein’s music has been heard on National Public Radio, NBC Television, Soma.fm, and in the film “Replicant”. In 2000, he was featured in an EQ magazine article “Adventures in Sound Design”, and his sound design was used in ABC’s television series “Lost”. In March of 2014, Jason released an EP titled “This is Not a Love Letter”.


“New Metal From Old Boxes” is his sixth release


Rubenstein, who’d previously worked as a software engineer at Google and at Pono Music, suddenly found himself unemployed in late 2013. He started working on “New Metal For Old Boxes” the next day, writing one song per day for 30 days. “I’d been running the engineering for Pono Music for three years when the whole project hit its nadir. We all got laid-off. The very next day, at 7am, I fired up my home studio and started writing music. No wasting time. I wrote one song every day, not worrying about whether it was any good - I just wrote whatever I wanted to hear. Every day, I literally asked myself ‘What do I want to hear? What am I feeling right now?’ and I went and wrote whatever that was.”, Jason said. “A lot of the process for writing came from the process for writing genre fiction: ‘What happens? And what happens next? And what happens after that?’. Every song tells a story of some sort, regardless of whether it has lyrics. My songs don’t have lyrics, but they’re either stories, or a series of vignettes, or a scene. For example, there’s a story about a heist in there, and one about a barbarian horde storming-in from the steppes. I’m a genre-fiction geek, what can I say. And I didn’t give a damn what anyone else thought about the music. As long as I liked it, I was happy. I trust my taste in music - I figure that if I like it, there will be others out there who will as well.”


The music is heavy, cinematic, relentless. There is not one ballad or slow-moving track on the 12-song album. Even the breakdowns are heavy, like moments of Steely Dan with King Crimson’s terrifying rhythm section. “The mix engineer, Niko Bolas, called the project ‘Jason-R-Schizo’ on the first day of mixing. My everyday personality doesn’t match the music. It’s a divide - there’s my meet-me-on-the-street personality where I try to be as decent a human being as I can, and my musical personality, which is heavy, dark, brooding, angry. I’m pretty sure that if I didn’t make this music, my personality would start to corrode. I’d be a short, angry man yelling at clouds and dogs and minivans.”


Jason’s history is uncommon for a child of the 1970s. He discovered computers at the same time he discovered synthesizers. “While that’s common for children these days, in 1975 both computers and synths were rare.”, he said. His elementary school had an IBM computer terminal where he and his friends taught themselves FORTRAN, a computer programming language. A neighbor owned an Arp Odyssey monophonic synthesizer, and a school field-trip brought Jason face-to-face with a giant Moog modular synthesizer. “When I was 4 years old, I discovered my parent’s stereo and an LP of “Switched-On Bach” by Wendy (at the time Walter) Carlos. It blew my little mind. So coming face-to-face with the type of machine that made those sounds was life-changing. I knew right then that I needed to make music with one of these monsters.” The combination of technology and music came naturally to him, and the local record store became a source of education. He bought and borrowed LPs by Vangelis, Jean-Michel Jarre, ELO, ELP, Rush, Yes, Jean-Luc Ponty, Keith Jarrett, Chick Corea, Gary Burton, The Beatles, Black Sabbath, Steve Miller, Kraftwerk, Bruford, Allan Holdsworth, King Crimson, Brian Eno, Peter Gabriel. Then a degree in computer science, a gig with a Chicago-area progressive rock band (“We sounded too much like Rush and not enough like ourselves”), jobs as a consulting programmer for Fortune-500 companies, and music school at night. “I’d hang out until 4am with the jazz & rock students from school at Chicago jazz clubs. How the hell I made it to work the next morning is still a mystery to me.”, Jason said. Finally leaving Chicago for Los Angeles in 1995 after failing to get traction in the local music scene, he produced his first CD in 1996, and the second in 1998. These were eclectic, downtempo rock/electronic/jazz projects that immediately opened doors for him to produce music for television and film.


It took ten years for Rubenstein to get back to creating music and produce “New Metal For Old Boxes”. “For a long time, I wasn't writing music for myself”, he said, “and it turns out that was a problem. For a few years I was writing what I thought other people wanted to hear, or writing what a media producer needed for a deadline. And the music I was writing had nothing to do with what I was feeling, or with what I loved to hear. So I got away from it in 2004 and started a software company, and then moved to San Francisco, and then had the opportunity to work at Google, and then with Neil Young on Pono Music. It was an incredible experience to do all of that, but now it’s time to have new experiences creating new music. Through all of that geekery I learned to just write the music that I wanted to hear and feel. I need to keep getting it out of my system, and it turns out that I'm simply unable to quit music. A ten-year break was too long. It’s either I keep creating music like this, or I start standing on the streetcorner and yell at the clouds and the passing hipsters.”