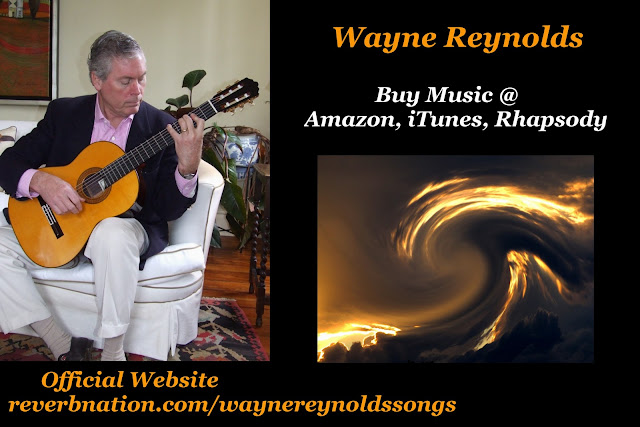 Singer, songwriter, and guitarist Wayne Reynolds doesn’t want to be fenced in. From the beginning of his musical life all the way up to the present moment, he has consistently avoided kowtowing to any brand of musical dogma. “I’m reminded,” muses Reynolds, “of the exhortation by none other than Bobby McFerrin that we should not live in the same musical room all the time. Walk around, don't get stuck.”

It should be no surprise, then, that when it comes to musical breeds, Reynolds is a bit of a mongrel, and proud of it. His album, Another Day Goes By, contains elements of folk, pop, jazz, classical, bossa nova, and more, all filtered through the singular sensibility that’s unique to the man steering the songs.

Despite the easygoing, understated tone of many of the tracks on Another Day Goes By, and the earthy, organic feel of the production, Reynolds comes from a family with close connections to the classical tradition. Not only was his great-grandfather William Burnet Tuthill the acclaimed architect behind the creation of Carnegie Hall and a gifted musician to boot, Reynolds’ grandfather and parents were also classically trained players. Much to his parents’ dismay, their guitar-playing offspring ended up playing in several rock bands as a teenager in Memphis. Though nobody knew it at the time, the last of these, The Jokers, would have a close tie to rock & roll history. “This band played a lot in clubs and shows in the area and had several members that became part of The Box Tops,” remembers Reynolds. “I was only 15, several years younger than the others, and when they quit school to play with [Box Tops singer/future Big Star frontman] Alex Chilton and the others, I declined, or really, was denied by my parents, as you can imagine.”

There may be an alternate universe where Reynolds stayed the course with his Memphis bandmates and ended up as part of the group that we know for scaling the late-‘60s charts with “The Letter” and “Cry Like a Baby.” But in our reality, true to his lifelong eclectic nature, he investigated other musical areas instead. Reynolds then met classical guitar legend Christopher Parkening, who was just a young man himself at the time, and was impressed enough to begin a serious study of guitar technique. “Through high school and college I kept at it and eventually went to music school on a scholarship to study with the great Cuban guitarist, Juan Mercadal,” recalls Reynolds of his artistic evolution.

Though Reynolds became well versed in classical guitar, he recalls, “I was always arranging some pop standards to play for pure fun.” By the time he became a part of the music faculty at the University of Memphis, Reynolds was moving into still more new territory, crafting soundtrack music for public television programs. But all the while, there was yet another place Reynolds’ constantly shifting muse was gradually leading him, towards the creation of Another Day Goes By.

“Over a few years I had written a group of songs that I was playing for friends,” explains Reynolds. “They were very impressed by the different quality they heard in the tunes and insisted that I do something about recording them.” The musical mélange that Reynolds’ friends heard, in advance of the public at large, was partly the product of his idiosyncratic influences (everything from bossa nova masters Baden Powell and Joao Gilberto to pop tunesmiths Jimmy Webb and Billy Joel) and partly his own set of musical fingerprints.

“We eventually went to work getting the songs arranged and recorded,” says Reynolds of the production process for Another Day Goes By. “We developed the arrangements more or less in real time with the rhythm section, and then multiple overdubs for the soprano sax, background singers, and the rest.” Though the record has a rich, full sound and finds Reynolds supported by a full band of obviously empathetic players, the arrangements are acoustic-oriented and the album retains a light, airy feel. There’s breathing space between the instruments, a natural-sounding vibe that’s sonically succinct but still feels somehow spontaneous.

The fluid finger-picking acoustic guitar patterns that drive the opening track, the romance-filled “All I’ll Ever Need,” give an indication right off the bat that Reynolds knows his way around a fretboard but isn’t one for hitting listeners over the head with ostentatious licks. At the same time, the seemingly classical-inspired guitar lines that light up “A Little Gray” could only come from the hands of someone with a lifetime of technique at their command. The combination of jazzy, minor-key moves and Reynolds’ warm, deep vocal tones on the album’s closing cut, “If You Walked Into My Life,” hark back to an era when it was still possible to turn on a Top 40 station and hear an accessible-but-sophisticated ballad like George Benson’s “This Masquerade.” And from the welcoming, James Taylor-like folk-pop feel of “Focus on the Love” to the plangent electric guitar coloring and insistent rhythm of “How to Be Me,” Another Day Goes By adheres to the open-ended artistic ethos that has sustained Reynolds since the beginning of his musical journey. When he says, “I want to have as broad and complete an offering as I can. I am challenged by all musical idioms and admire those artists who play lots of styles very well,” even a casual listen to this album proves that he takes those sentiments to heart.


Send Newsletters to your fans from ReverbNation.com