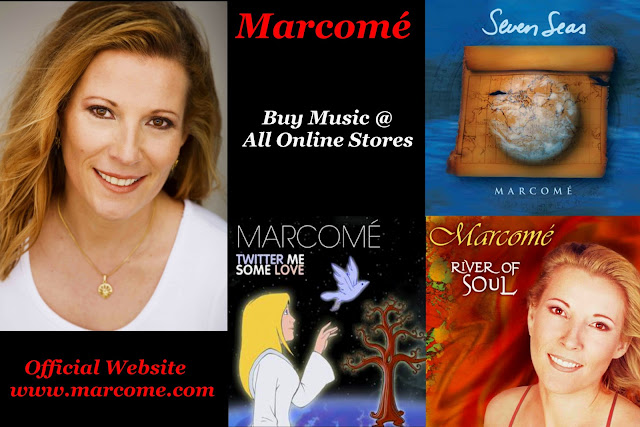 
Marcomé (pronounced Mar-ko-may) is a Canadian singer songwriter. Gifted with a pure voice, she blends lyrics with a unique wordless language that brings us in an atmospheric universe. Marcomé carefully fuses different world music influences with jazz style and classical vocals creating a new world music genre. Marcomé produces, arranges and engineers her musical work. She is a keyboardist, programmer and sound engineer as well as a proficient percussionist.


After completing her post-graduate studies in commerce and communications, Marcomé worked in theatre, in both music composition and sound creation. She then moved into the music industry. Her impressive professional experience and background as a quality sound and mastering engineer, has allowed her to collaborate with renowned artists and producers. This is the source of both her musical inspiration and artistic sense. Her industry collaborations include work with such artists as Diana Krall, Cecilia Bartoli, Le Cirque du Soleil, Branford Marsalis, Sir George Martin, Tom Waits, Daniel Lanois, Pat Metheny and Yes.


The Making of Seven Seas:


The Making of River of Soul:


Marcomé slowly began writing new compositions for what would eventually become River of Soul. The years that separate Seven Seas and River of Soul allowed the artist to mature and evolve both emotionally and spiritually.
Marcomé’s strength lies in her ability to weave and create multicolored sounds with strong melodies. In this River Of Soul succeeds. It is a recording imbued with intimacy and laced with introspection. It was cinematically conceived; it’s a feast for the eyes as well as the ears. Welcome to the River Of Soul, a voyage filled with spirituality, imagination, sensitivity and a surreal sense of being. River Of Soul was co-produced with Michel Robidoux (Leonard Cohen) who also adds his exquisite guitar playing to the mix and Martin Lord Ferguson (Cirque Du Soleil). Michel Dupire’s (Sarah McLachlan), sophisticated percussions adds a distinctive touch and ryhthm to the overall sound. River Of Soul is an album, which many people will discover a deep connection within.


The first single & music video entitled River of Life sets the tone and unleashes the magic within. “Come and run in the river, let the waters rejoice in your life”.