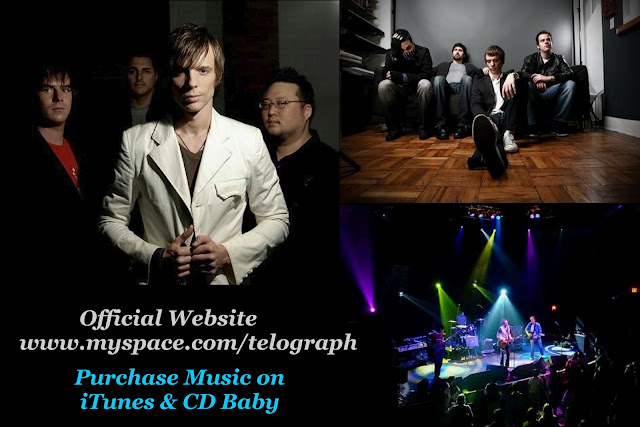 In a current music industry that is being more and more divided between “pop” and “indie” rock, TELOGRAPH arrives to bridge the gap. The self-proclaimed Cinematic Popsters have come a long way in the past few years. Now two EPs deep, they have created a soundtrack to their own world and a clear musical vision for the future.

TELOGRAPH’s second EP, Telograph EP, was released in January of 2008. The record was produced by Chris Keup and Stewart Myers (Jason Mraz, Rachel Yamagata, Lifehouse), and is best described by its use of driving guitars, powerful vocals, and atmospheric production. Influenced by 90’s British rock bands, as well as modern indie rockers, Telograph EP was well received by the media and was described as 'Impeccably arranged and confidently played,' by the Washington Post.

Since the release of the band’s first EP in January 2007, the band has gone on to tour and perform with national acts including Gomez, Longwave, O.A.R., Robbers on High Street, Augustana, and 1990s, at some of the largest venues on the east coast. In every city, TELOGRAPH continues to receive warm receptions, proving their ability to cross genre boundaries while enchanting listeners with their sound.

Never slowing down creatively, new material is already in the works, and the group plans to continue touring as hard as possible to get the word out. TELOGRAPH wants to be the biggest band in the world, and given the momentum thus far, they just might be in store for something big.

"...the kind of local band that's so great it should be famous, but isn't yet."
- Washington Post Express, October 2006

"This is a band to pay attention to and follow with rabid fascination."
- Smother Magazine, February 2007