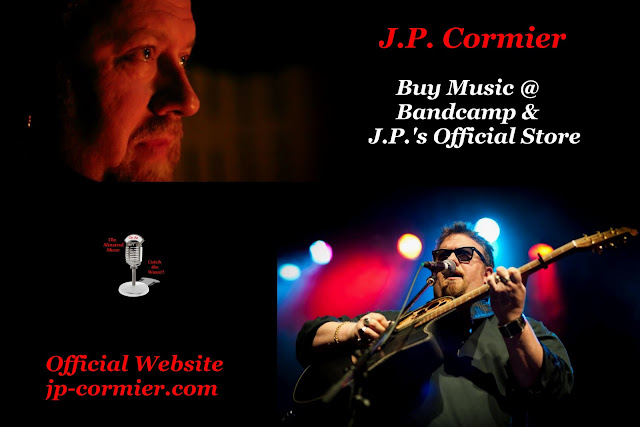 
J.P. Cormier appears from the shadows at the side of the stage—an unsmiling mountain of a man in dark glasses—and stalks almost angrily to his seat in the spotlight. He picks up his instrument, adjusts his mic stand and asks the audience: “How’re ya now?” in a rumbling baritone.


Then he starts to tell his story.


His lyrics and melodies illicit every emotion you can muster as he paints picture after picture of loves lost, towns disbanded, fishermen killed by their trade and the most important moments of his own life. His voice is surprisingly sweet and soft-sounding, completely unexpected coming from his 6’4” frame.


He begins an instrumental on one of the five or six instruments he may have on stage with him and you realize that this man is not just a singer or a songwriter. As his fingers fly, with such speed and precision, upon each instrument in turn, you get another picture—one of pure joy and boundless energy; total spiritual abandon bordering in its execution on genius. It’s a word that is used to describe him again and again.


Then just as you think you’ve seen everything, he begins to speak to the audience. He’s more comfortable now. He’s getting over the shyness he feels when meeting new people. Now he feels he can connect safely. Opening up with a few one-liners, he moves on to amusing anecdotes and true tales from his own past. Some bring a roar of laughter from the audience that can be heard outside the theatre, others bring a tear to the eye. He’s home now, his banter is easy as he draws the crowd into each song and tune. The connection is complete and he is one with his audience. Even behind his dark glasses, you can tell that he too sheds a tear when his audience does.


J.P. has a profound effect on audiences, but those who know him know his heart far exceeds his stature. His acts of random kindness in and out of the music industry are legendary. There are many stories of the “big fella” going to play for someone on their deathbed, helping fledgling artists, or generally standing up for people who couldn’t do it for themselves. He spent two weeks in the theatre of war entertaining the NATO troops in Afghanistan and is always quick to do what he can for a good cause. Maritime artists like Dave Gunning, Darren McMullen, Douglas Cameron and many others have benefited from J.P.’s assistance and patient guidance. His charity work is endless, once raising 4 tons of food for Feed Nova Scotia. A man well aware of the plight of the needy, he celebrates his birthday each year with a fundraising concert for Christmas Daddies in Cape Breton.


Accolades for J.P. have come from far and near over the years. He’s been described as “the quintessential Maritime musician” and having “the ability to make the brilliant appear effortless”. His early years playing in Nashville and the southern states have earned him high praise from folks like long time pickin’ partner and collaborator Marty Stuart, who says, “He’s just incredible, one of the best players I’ve ever seen.” Country music legend Waylon Jennings has said, “I would be proud to share the stage with this man anywhere, anytime”, and J.P.’s greatest hero, Chet Atkins has honoured him as “…one of the most important guitarists of his generation.” Closer to home, former Governor General of Canada, Adrienne Clarkson proclaimed, “What you have to say as an artist is incredibly important and a treasure to our Nation” and Gordon Lightfoot reveals, “I have a great deal of respect for Mr. Cormier.”


He still has his ritual three beers before the show, and prefers to be outside the venue where he can smoke and talk to folks as they enter. He’s either there or hanging out backstage with the fans and fellow musicians who show up and don’t feel there’s any reason why they can’t go right back stage and see him. There are no real walls around J.P. and he likes it that way. This may be why he’s stayed so far from the mainstream. He never wanted the barriers that great fame brings between an artist and their audience. The people who listen to J.P.’s music are his lifeline and his inspiration. One man’s simple story might inspire the next great J.P. song. Another’s may be about someone whose life has been changed by something that he wrote or played. He likes to hear about these things first-hand. But if the compliments get too heavy, he’ll just look uncomfortably at the ground and say, “I didn’t write nothin’, I just held the pen.”


With all of that said though, his modesty belies a long list of accomplishments. J.P.’s impressive body of work has earned him a vast and loyal fan base around the world and he has played extensively throughout Canada, Great Britain, Europe, and the USA. His songs have been number 1 hits on American and European radio and he’s won 12 East Coast Music Awards, 5 Music Nova Scotia Awards, and a Canadian Folk Music Award. His album, Another Morning, was nominated for a Juno in 1998 and has since sold nearly 100,000 copies. Performing countless times on television and radio, J.P. released 13 solo albums since 1995 and won more than 30 awards in 20 years of fiddle, guitar, banjo, and song-writing competitions.


In the 30 years since he made his first paycheck at a “Union” gig, going professional at the tender age of 13, he’s traveled hundreds of thousands of miles spending months at a time on the road. It’s no wonder he looks a little tired sometimes!


No matter what you call him–genius, recluse, friend, foe, outgoing, unapproachable, giving, kind, or thoughtful–there is so much more beneath the surface. Celebrated as a singer, songwriter, multi-instrumentalist, producer, recording artist, teacher, collaborator, innovator, and award winner, J.P. Cormier’s talent is comparable to none. He’s praised in superlatives, but even these don’t do the man justice. The best way to get to know J.P. is to listen to his music. That is where his real heart lies. It is a world where everything is done fairly, no one wants, and there are no broken hearts allowed. In his song “The Messenger” he speaks not from himself but something much greater when he says:


“I am just the Messenger
I speak to every man
Every woman, every child
Who lives upon the land
My face is often hidden
Many do not wish to see
But when you’re in the mirror
Sometimes you look at me.”


J.P. Cormier is not to be missed. Stuff this good only comes around so often 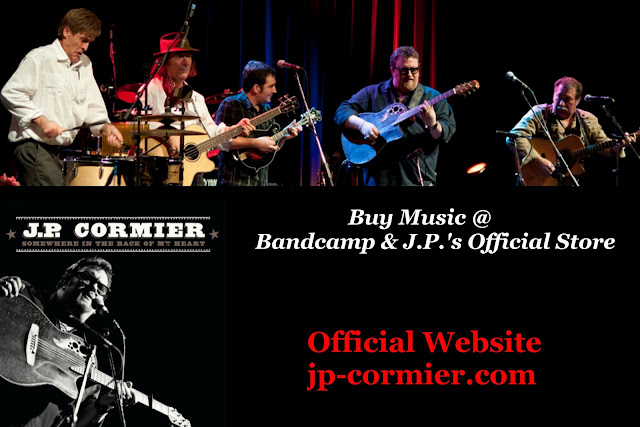