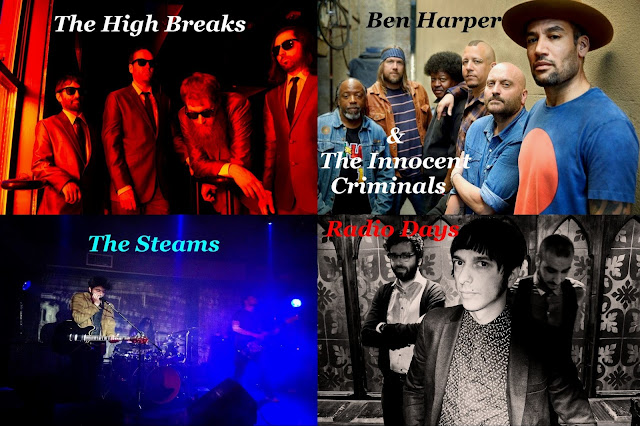 United Music Mag is dedicated to presenting new music by at least four artists every week for inquiring music fans. This is where you’ll hear all the best music from across the World in one place, Signed, Unsigned, and Independent…and so here are today's four artist’s under the spotlight who range from the known to unknown including the awesome multi genre music master “Ben Harper” from Pomona California, the cool surf sounds of “The High Breaks” from Burlington Vermont, the progressive Psychedelic sounds of “The Steams” from Athens Greece, and the Retro 60’s Beatlesque Pop Band “Radio Days” from Milan Italy.

There’s lot’s of great music the World Over, so let’s get started… 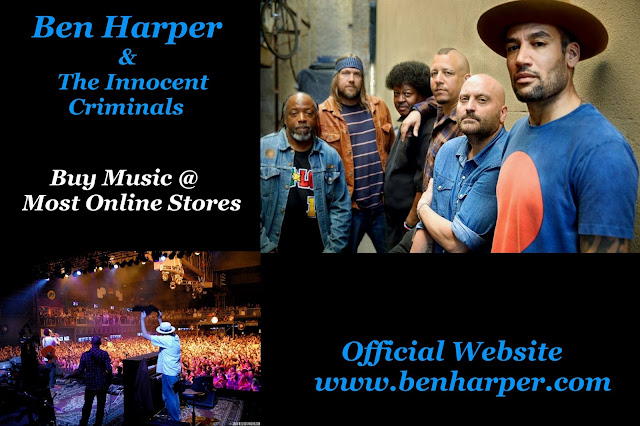 It had been seven years since Ben Harper last played a show with the Innocent Criminals, so when the time came to reunite for a live tour in 2015, the band—percussionist Leon Mobley, bassist Juan Nelson, drummer Oliver Charles, keyboardist Jason Yates, and guitarist Michael Ward—quickly discovered that Harper had more in mind than simply revisiting the group's prodigious collection of hits. In fact, Harper had been quietly amassing material for a new record, Call It What It Is, and the first recording sessions were scheduled to begin even before the rehearsals for their triumphant four-night sold-out reunion run at the Fillmore in San Francisco.

"I thought we would be more energized and revitalized by thinking outside the box and starting with new material in the studio before we dug into the old stuff," explains Harper. "It was meant to be a signpost that we're here to forge new ground musically and personally. Because of that, the older material started to sound brand new too."

Beginning with his 1994 debut, Welcome To The Cruel World, Harper released a string of eight studio albums over a decade and a half. This extraordinary run, featuring contributions from the Innocent Criminals, established him as a singularly powerful songwriter and performer with range across multiple genres and an unmatched ability to blend the personal and political. The accolades poured in—Rolling Stone hailed his "jewels of unique and exquisitely tender rock & roll," while Entertainment Weekly praised his "casual profundity," and Billboard said his music "reminds us of the power and beauty of simplicity." Massive, international sold-out tours, Top 10 debuts in the US, Gold and Platinum certifications overseas, and a slew of TV appearances cemented Harper and the band's status as genuine global stars.

"The process of working outside of my comfort zone is really important to my growth," explains Harper. "The situations I've put myself in have pushed me further than I could go in any familiar setting, and that's what's brought me back full circle to the Innocent Criminals now. Everybody went out and grew in their own ways during our time apart, and that's brought this heightened level of appreciation for each other and what we do."

"Each member brings a wealth of knowledge and different styles of music," said Nelson. "What makes us unique is that we come from different places musically and we seem to complement each other because of the different styles that we play."

"Playing with the Innocent Criminals again is like riding a bike," adds Charles, "but that bike has gotten tons of upgrades and modifications since the last time. There was a feeling I had missed for so long that you can only get from playing together."

From the opening minutes of Call It What It Is, it's clear that that feeling has never been more powerful or exhilarating. The album kicks off with "When Sex Was Dirty," a song that Harper had earmarked for the Innocent Criminals from the moment he wrote it. It's all classic rock and roll bravado, full of electric guitar swagger, driving percussion, and seductive energy. Harper follows it up by demonstrating that his range is wider than ever with the utterly vulnerable "Deeper and Deeper," a near-whispered acoustic moment of introspection co-written with Ward, who says that despite the time apart, or perhaps because of it, the band is now "closer than ever as musicians and as human beings."

It's on the album's bluesy title track, though, that Harper cuts to the quick. "There's good cops and bad cops / White cops and black cops / Got to call it what it is / Murder," he sings before invoking the names of Trayvon Martin, Ezell Ford, and Michael Brown.

For the first time in his career, Harper split the recording of the album into four five-day sessions spread across an entire year, enabling him and the band to come back to the music with a deeper sense of objectivity. "It gave us a chance to live with the songs for a while and let them soak in," says Mobley, who worked with artists as diverse as Mick Jagger and Nas during his time away from the Innocent Criminals. "It gave us a chance to reflect, which was important to our satisfaction and allowed us to make good decisions."

The new album is Harper's second release for Stax Records. Perhaps most associated with icons like Booker T & The MGs, Otis Redding and Isaac Hayes, Stax is a seamless fit for Call It What It Is, due to its rich Civil Rights-era legacy and its dedication to spreading soul music in all its most powerful forms. Harper speaks reverently of the label, describing the honor and the privilege of calling it his home, and it's clear the history holds a special place in his heart as both a fan and an artist.

As serious and solemn as Call It What It Is can get, though, it's also one of Harper's most joyous records. "Shine" grooves with blissful passion, while "Pink Balloon" shows off a lyrical mischievousness that surprised even Harper himself. Like so many of the other tracks, it only fully revealed itself over time and through a free-flowing collaboration with those closest to him.

"There's a natural way we move together and flow through the recording of a song," explains Yates. "There's an unspoken dialogue that runs steady through this album like a river. The feelings evoked by these songs are coming from the very depths of our souls. It's a sacred sharing."

The result is perhaps the proudest accomplishment of Harper's prodigious career.

"The time we took with this record has let me look it straight in the eyes and say that I gave everything I could to it and that it's exactly the way we intended it to be. To be able to say that we've left no stone unturned just feels great."

For the legions of Ben Harper fans that have been waiting eight years for a new album with the Innocent Criminals, it feels even better.

For more on Ben Harper please be sure to check out his official website and also say hi on his social links provided below. 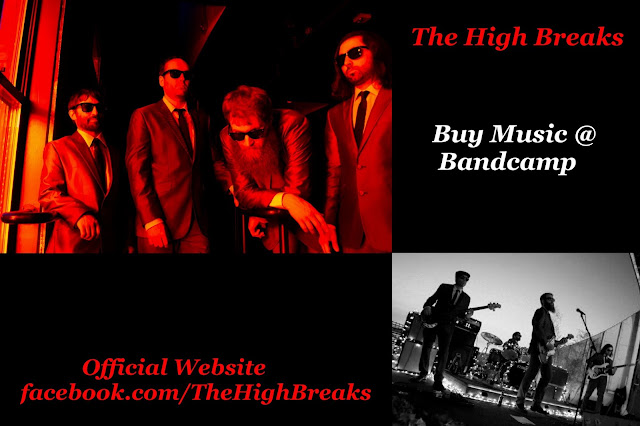 The High Breaks aim for a very specific comfort level. By crafting traditional surf vibe and tone into an accessible instrumental story, the goal is to give the listener a sensation of being elsewhere. This compilation of original, instrumental narratives is meant to evoke a feeling of ease, cool adrenaline comfort and suspicion. Enjoy this music in a car on a sunny day or on a stoop at dusk…or even just kickin’ back on the computer. Check out their links and be sure to show your shades and give them the thumbs up.

Music will be added to playlists once it becomes available 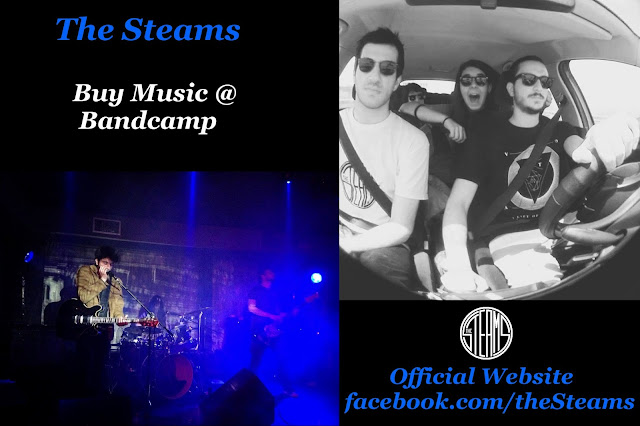 The Steams are a modern Progressive Psychedelic rock band from Athens, Greece that came together in September 2011. Influenced by a wide variety of music from the 60’s including “The Doors”, “Pink Floyd”, and “Aphrodite’s Child”, the Steams Music carries a solid schooling of the best while adding some of the more recent influences such as the “Kyuss” and “Brian Jonestown Massacre” to their own creative flair.

Over the past few years “The Steams” have experimented with various sounds while developing their own style of rock which gathers their influences of 60’s, Progressive rock and today’s shoegaze / Psychedelic rock. A sound that is demonstrated well on their debut two song release, “Feed” and “Green Fire”.

The Steams continue to play the Athens music circuit and plan an autumn tour followed by studio time to release their debut album in 2017. Be sure to check out this rising band from Athens and say hello to them on facebook. 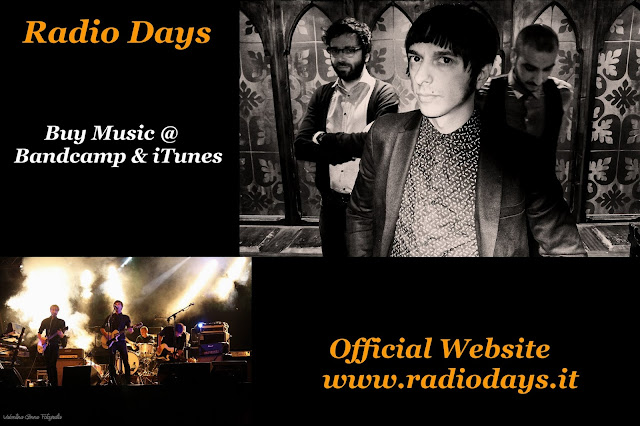 Today’s 4th band is a retro 60’s Pop / Power Pop group from Milan Italy. If you love the early Beatles, you’ll love this new single of theirs called “Why Don’t You Love Me Anymore” taken from the album “Back in the Day” released on March 31st, 2016.

The album is filled with upbeat Pop music that’s sure to please, so be sure to check out their new album below and then go over to their websites to listen to all their other tunes and then find out what they’re up to.

* SCROLL DOWN TO THE PLAY-LISTS BELOW AND STREAM MUSIC
Posted by Stewart at 8:22 PM