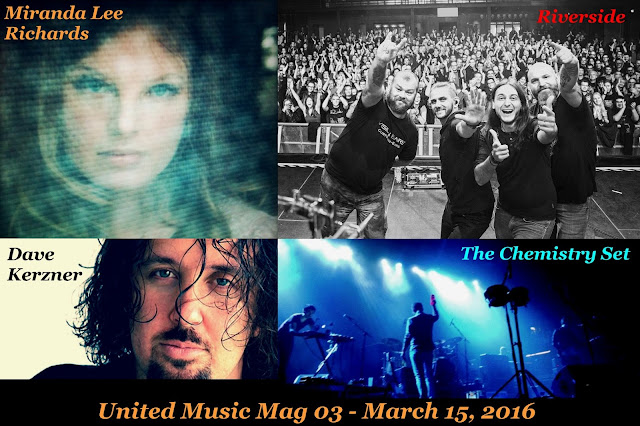 In today’s edition of United Music Mag, we spotlight the folky brilliance of "Miranda Lee Richards" with two songs from her new album “Echoes of the Dream Time”. We then cover some of the exceptional music by Progrock group “Riverside” who released a video for their amazing song, “Time Travellers” on Inside Out Music TV youtube channel. Next, the ever creative Psychedelic Pop band, “The Chemistry Set” follows with their new album “The Endless More and More”, and last but certainly not least, Progrock artist, “Dave Kerzner” who just released a new video for his song “My Old Friend” from his stellar 2015 album “New World”.

We cover the very best music here on United Music Mag, and do so, because music matters to us, and you’re here because it matters to you also, so let’s begin… 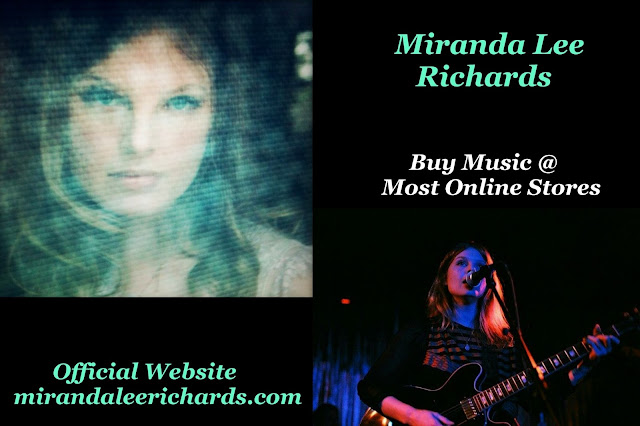 With a beautiful soothing voice and ambient dream like music expression, Miranda Lee Richards couldn’t have picked a better title for her latest album, “Echoes Of The Dreamtime”. Miranda’s meaningful poetic lyrics are beautifully displayed in a soft-spoken music that is altogether pleasing to the senses. My favourite songs from her new album are, “It was Given” and “Already Fine”. Both songs, presented below, will resonate with a wide variety of music fans. All I can say is Bravo Miranda! Keep doing it your way, because these songs are going to stay with us for a long time to come, and are truly worthy of Gold status. The entire album is soothing medicine so after listening to the two tracks below, check out more of Miranda’s music at her Official websites (See links below) for details.

“Echoes Of The Dreamtime” was released worldwide via London-based indie Invisible Hands Music on January 29, 2016.

Miranda Lee Richards was one of the first artists I covered when I started World United Music back in 2010 on the Minstral Show, so it is doubly special for me to see that Miranda continues to create great music today. Here is the 2010 Minstral Show episode that contains two of my favourite songs “Beautiful Day” and “Last Day’s of Summer” from her 2009 album, “Light of X”, 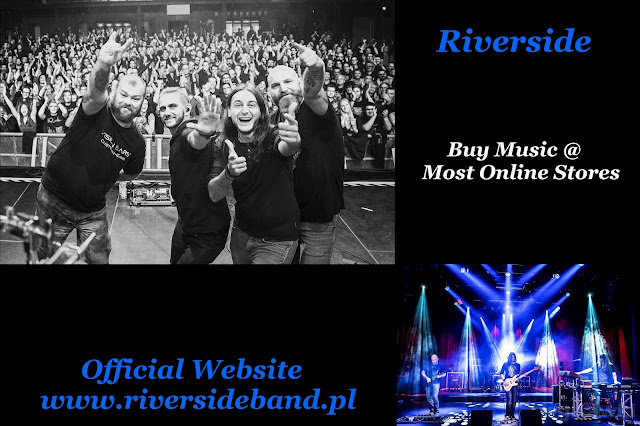 Riverside is a rock band from Warsaw, Poland founded in 2001 by friends Mariusz Duda, Piotr Grudziński, Piotr Kozieradzki and Jacek Melnicki, who shared a love for progressive rock and heavy metal. Riverside can be described as a blend of atmospheric rock with metal elements, resulting in a sound similar to that of Pink Floyd, Porcupine Tree, The Mars Volta, Opeth, Dream Theater, and Tool, while still maintaining an identity of their own.

They released a music Video for their song “Time Travellers” on Feb 11th, 2016 on Inside Out Music TV. The song is destined for classic status as the lyrics and music combine to weave a deep meaningful understanding to how people the world over feel today…”let’s go back to the world that was 30 years ago, let’s believe this is our time”…this song should be on every radio station, sitting at the top of the best songs of 2016, it certainly is one of the very best with this music fan and I have no doubt in my mind that the song will resonate with a global audience.

Song Added to the Following Video Playlists:
Best of 2016 – Rock and Alternative
Progressive Rock 2000 to 2016

In Memoriam to Piotr Grudziński 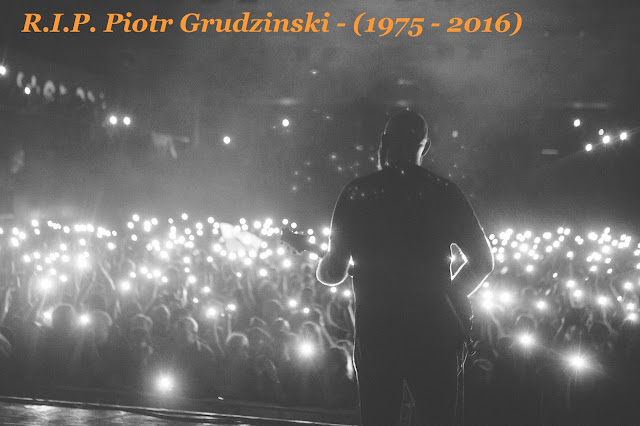 There are many more great Progressive Rock tunes by Riverside that are absolutely brilliant and truly worth the share here, as they scream out to me as a good bottle of wine would to wine connoisseur, so I’m sharing a few bottles of classic Riverside progressive rock today. 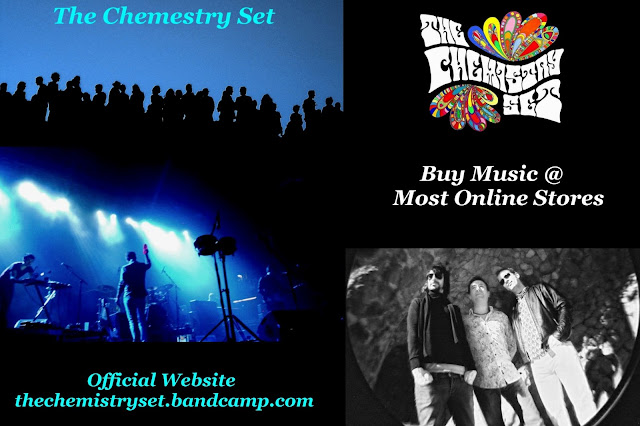 The Chemistry Set are a groovy Psychedelic Pop band from the UK that have become a dynasty in their own right as they have seen the front and backside of the music industry since the 1980’s. Here’s a band with many stories to tell and are still going strong today with over 41 releases and counting…oops there’s another one. They released their latest album “The Endless More and More” on March 8th, 2016.

The Chemistry Set continues to mix the elixirs of sound to come up with unique psychedelic creations that carry the consciousness for a new generation of psychedelic rock. Special WOW OUT to, “Elapsed Memories”, “The Open Window” and “International Rescue”, my favourite songs on their new album.

“The Endless More and More” has something for everyone and is truly worth a listen. Check out their album below and then pay them a visit on Facebook with a high five. 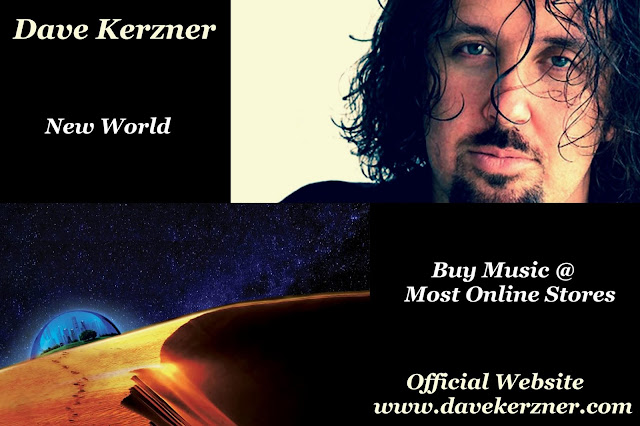 Our fourth big shout out today goes to Dave Kerzner who just released a new video for his song “My Old Friend” on March 14th, 2016. The song is from his 2014 Album “New World” a progressive rock concept album that continues to impress. Dave is currently on tour in Europe, so if you’re in the EU, be sure to check out his schedule and catch an amazing show.

“New World” by Dave Kerzner is a brilliant progressive rock album filled with meaningful lyrics and imagery that captures the listener from start to finish. The entire album is a wonderful artistic expression that fosters a musical experience you can see and feel. “New World” is a definite must in your progressive rock music collection. Have a listen to the album “New World” (Embedded Below) and pick the album up directly from the Bandcamp link provided.

Song Added to the Following Video Playlists:
Best of 2016 – Rock and Alternative
Progressive Rock 2000 to 2016

…And there we have it, another inbox of great music shared…Thanks for checking out the new music and videos on today’s edition of United Music Mag. Remember to support World United Music by sharing this post with your circles…Great music should be heard by everyone, so share, share, share away, don’t be music misers 8-) and have a Super Day!

* SCROLL DOWN TO THE PLAY-LISTS BELOW AND STREAM THE MUSIC