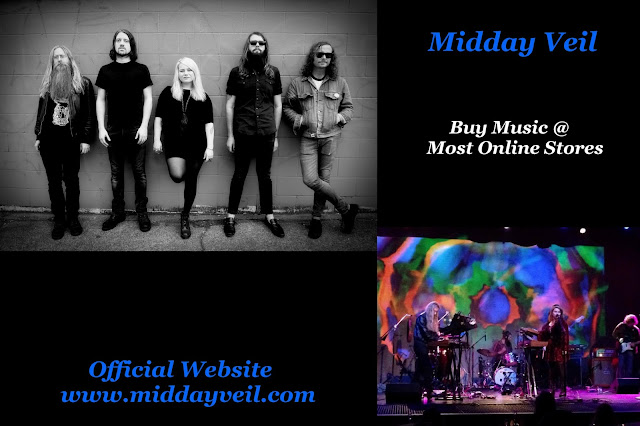 The band began in 2008 as a collaboration between vocalist and multimedia artist Emily Pothast and classically-trained pianist / analog synth head David Golightly. In early 2009, Midday Veil's sound was catalyzed by the addition of prolific multi-instrumentalist Timm Mason on baritone guitar, bass, and modular synth. Bassist/guitarist Jayson Kochan joined the band in 2011, and in 2012, Garrett Moore replaced original drummer Chris Pollina. Percussionist Sam Yoder has also performed and recorded as a member.

Midday Veil's debut studio album Eyes All Around (2010) and ecstatic improvised cassette releases Subterranean Ritual II (2011) and INTEGRATRON (2012) established the band as a multifaceted entity with roots in synth pop, psychedelic rock and free improvisation. Produced by Randall Dunn and featuring artwork by Robert Beatty, Midday Veil's 2013 studio LP The Current harnessed the experimental intensity of earlier releases with an intensified focus on songcraft. The Current found its way onto a number of year-end lists, including a mention by The Wire as one of the top avant-rock albums of 2013.

In 2014, the band returned to the studio with Randall Dunn to record its third LP (and first with drummer Garrett Moore) This Wilderness, was released in September 2015 on Brooklyn-based label Beyond Beyond is Beyond.