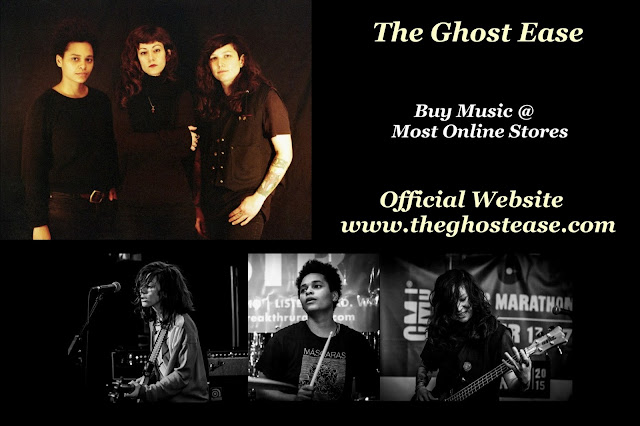 About: The Ghost Ease

The Ghost Ease are a Portland-based indie rock trio with a dreamy, slightly aggressive sound influenced by '90s alternative rock/grunge as well as the riot grrrl movement. Their songs are often tense yet calmly paced, but they also ramp up into a spirited punk fury, and are always propelled by the unique vocals of lead singer/guitarist/songwriter Jem Marie.

The group started as a home-recording solo project of Marie in 2010, and became a duo in 2012 when Nsayi Matingou joined on drums. The Ghost Ease recorded their self-titled debut album during winter of 2012 through spring of 2013, engineered and mixed by Joey Binhammer, who also contributed bass to some of the album's songs. Following the album's release on Talking Helps Records, Fabi Reyna became the group's bassist. Lawrence Vidal replaced Reyna in 2014. The trio's 7" EP Quit Yer Job, which featured a brooding cover of M.I.A.'s "Bad Girls," was released by Cabin Games in April of 2015. The Ghost Ease recorded “Raw”, their second album, in Seattle with producer Steve Fisk, and it was co-released by Cabin Games and K Records in September of 2015. ~ Paul Simpson

The Ghost Ease revel within the warm folds of a sort of soft savagery, pin-pricking holes into the fabric of the astral veil, and creating hypnotic, raw opuses by way of heavy guitars, frenzied drums and lilting vocal timbres.