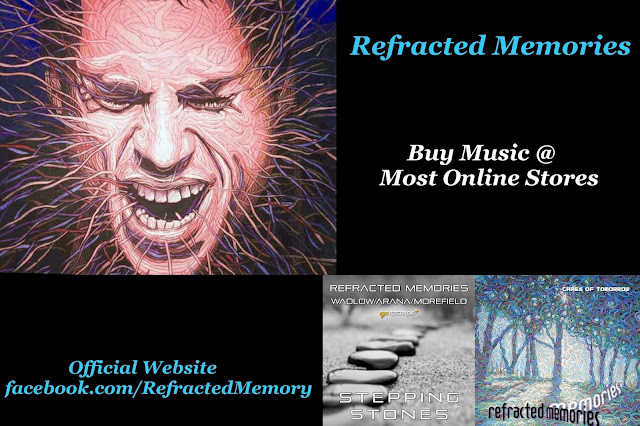 Refracted Memory - started when Jack asked Mike for help on a soundscape. The track was to become an album called "The Cares of Tomorrow". During the next few weeks the two quickly formed Refracted Memory and created 10 tracks together for a January 2013 release.

As Jack and Mike were doing their thing, Jay, a friend of Jack was asked to work on a track called “Blood Red Sun”, where Jay added his acoustic playing and lyrics over their soundscape. Everything fit together perfectly and turned out to be a truly special track, as did all others following that. Since then the three have not turned back and have written over 2 albums worth of material. Their debut album together, “Stepping Stones” is out now on Juno and will soon be released internationally on Aug 21st 2015.
-----------------------------

Michael Wadlow - is a producer from Wales who returns to Electronic Music after 20 years of inactivity. This loving father of 3 and devoted grandfather of 3 is back with a bang as an iPad exclusive artist whose soundscape inspired tracks have captured the imagination and he is now one of only a handful of iPad producers to be signed by several recording labels. Michael Wadlow continues to push back the boundaries of electronic music and show the music community just what is possible with the humble iPad!

Jack Morefield - played in a couple of successful cover and original bands simultaneously in Florida, USA in the late 90's. Citing creative differences, and frustrated at the inability to maintain a cohesive line up Jack quit playing live music and moved to Boston in order to start a family and focus on visual art. Fast forward to 2012 after an iPad gift from his wife, Jack was able to begin describing the sonic mindscapes that were impossible for him to define in the past. Jack always kept a hand in music production and multi-tracking but was amazed to discover the potential for composition using loops and grid editing. Never straying far from a guitar, he was now able to create full compositions to play over.

Jay Arana - is primarily a folk/psych folk, Americana acoustic artist, singer/songwriter.  He has played in a number of successful original bands over the years (post grunge era in the mid to late 90s, early 2000s) mostly in the Portland, Oregon area.  He is a self-taught guitarist and plays by ear, utilizing a number of alternate tunings that add to the depth of his sound.  A versatile musician that has influences from a number of genres, he does not stick to one particular style as he feels the complex emotions that come out through music cannot be satisfied by one particular style. Something he continually strives for is to describe life through music, keeping it as visual as possible through the lyrical/music interaction.

They Were There First