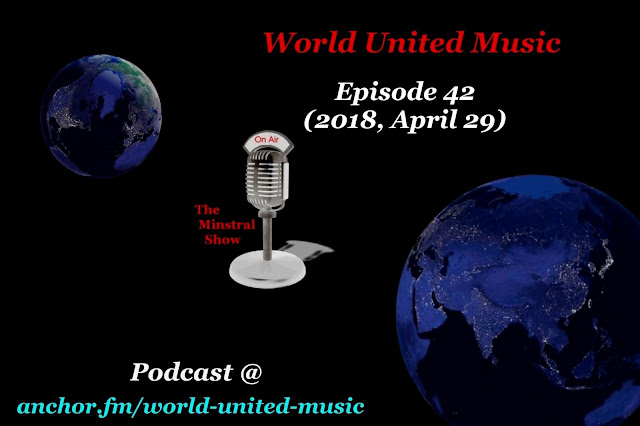 Hello, and welcome to episode 42 of the Minstral Show!

Music is the most powerful form of communication that I know of, as it reaches us on every level of heart, mind and soul to help us better understand ourselves. Lyricist E.Y. Harburg who wrote all the lyrics to the songs in “The Wizard of Oz” sums it up in a few words this way:

"Words make you think of thought, Music makes you feel a feeling, a song makes you feel a thought, and I'm convinced that the art of turning thoughts into feelings is the most powerful communicative force there is." I have to agree, and so

More than just a podcast, World United Music has emerged to bring you the best music being made in the 21st century.


Starting us off is UK artist Paul Liddell with “Giant Steps” taken from his 2015 album “Andelain”…Paul Liddell sings of escape to the inner reaches of the soul where freedom and connection with all life becomes “ONE”… but then in an instant, as eyes open, an unforgiving world brings us back to a sobering reality. A wonderfully poetic song expressed brilliantly by Paul Liddell.

“I was raised in Babylon” is a song that looks back in moral reflection to the choices made throughout history and where it’s brought us. Another brilliant song made by the light of Yusuf Cat Stevens.

As many know, Yusuf Cat Stevens has a great catalog of music including his latest “The Laughing Apple” so there’s lots to check out when you visit the Cat.

Shawn Phillips closes the set with “Most of Us Don’t Understand” taken from his 2003 album “No Category”. A song of deep reflection and meaning that speaks truth to the awakened in a very profound and poetic way…One of many hidden gems in Shawn Phillips wonderful catalog of songs and albums including his latest album called “Continuance”. I was very lucky to see Shawn Phillips in Pointe Claire last summer just before he launched his 2017 album “Continuance” the show was awesome and if you get the chance this year, don’t miss his show.

Now let’s sit back to feel these three great songs, on the Minstral Show.


Words have a way of reaching us in a profound way, but so does sound.

Darrel Treece Birch opens the second set with an instrumental called “From the Mouth” taken from his 2017 album “Healing Touch”. A progressive rock tune from an album which is filled with passion and defiance. It’s about the struggle of one man, frail and strong, conflicted, yet resolved to move past the turmoil in his life and find resolutions to life’s hurdles. The music is elegant and complex yet familiar to the human spirit.

Amarok follows with the title track of their 2004 album “Metanoia”. An excellent electro progressive rock tune that, to my mind, embodies the excitement of a racing heart and fluid mind just after the blast doors close behind with a thud…and then the adventure really begins. Words are not needed, as the music tells a story all by itself.

Static is a song that expresses how some people today become lost and disconnected by their addiction and belief in illusions and propaganda…while pushing away from the truth only to become further lost in a sea of static…One of the many great songs by Dave Kerzner on his 2017 album “Static” .

More than just a podcast, The Minstral Show brings you the best music being made in the 21st century. Hope you Enjoy the music.


In moments of reflection while listening to music, we find ourselves travelling through the sounds and visions of feelings, drifting to their flow in a state of relaxation and consciousness.

David Bowie begins the set with a 2013 stripped back version of his 1978 song “Sound and Vision” a song that expresses our creative state of mind and the very thought of creative expression from quiet moments. Certainly, one of my favorite David Bowie songs, one that inspires reflective thoughts of my own past.

Closing the set is Justin Hayward of the Moody Blues with “The Eastern Sun” taken from Justin’s 2013 solo album “Spirits of the Western Sky”.

The Eastern Sun is a song of Love and hope which is poetically and musically appealing in every way. A perfect example to express how music and lyric becomes the most powerful communicative force there is…it infuses our souls with empathy, the light of which belongs to god and the universe itself.

Music truly is the most powerful form of communication that I know of, as it helps us better understand ourselves and the moments we grace in this conscious realm.

And now let the sound and vision, set your compass for the eastern sun on the minstral show…see you next week.